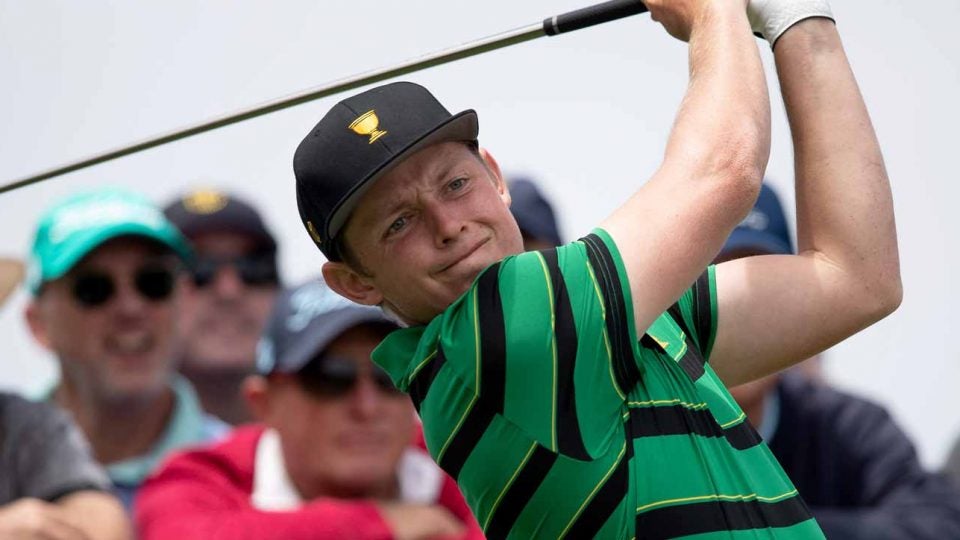 Cameron Smith practices ahead of the 2019 Presidents Cup at Royal Melbourne.
Getty Images

A lot of people took Patrick Reed to task last week over his controversial waste-area penalty at the Hero World Challenge. One of those people was Presidents Cup opponent Cameron Smith. One week later, and Smith isn’t backing down from his harsh criticism.

In an interview with the AAP following Reed’s rules violation on Friday, the 26-year-old Smith dropped the c-word twice in reference to the star American, saying, “I know Pat pretty good and he’s always been nice to me… but anyone cheating the rules, I’m not up for that. I don’t have any sympathy for anyone that cheats.”

News
Aussie golfer rips Patrick Reed: ‘I don’t have sympathy for anybody that cheats’

Smith, who has one PGA Tour and two European Tour wins to his name, also took exception to Reed’s initial excuse for the violation. Reed argued that the camera angle on the slow-motion replay, which clearly showed him moving sand in a waste area to improve his lie, was deceiving, and that the sand he moved was farther from the ball than it appeared.

As for that explanation, Smith had this to say, “If you make a mistake maybe once, you could maybe understand, but to give a bit of a bull—- response like the camera angle … that’s pretty up there (inexcusable).”

Reed responded on Monday, saying, “if you do something unintentionally that breaks the rules, it’s not considered cheating.” He added that Smith’s criticism would make the competition at the Presidents Cup “personal.”

On the eve of the first session at Royal Melbourne on Wednesday, Smith was asked about his comments by reporters on site, and he confirmed that interactions with Reed have been non-existent thus far.

“Yeah, I’m sure he didn’t like it. I think there is a little bit of tension there,” Smith said. “I’ve looked at Patrick a couple times but he hasn’t looked back. I’m looking forward to the weekend.”

The Aussie pro also acknowledged that he and Reed had been friends in the past, or at least they had a friendly relationship, and even work out with the same trainer.

“We share a physio out there. We would talk and chat in the locker room, but nothing much more than that. Just a friendly-type thing,” Smith reported.

But now things have changed, and their friendship is, for all intents and purposes, over. And Smith is fine with that. “I think it’s a case of what’s right and what’s wrong,” he said.

News
With Patrick Reed, captain Tiger Woods has a problem he hasn’t seen before

As for whether he hopes to be matched up against Reed this week, Smith deferred to his captain, saying it’s up to Ernie Els who he plays against, “I’m here to do a job for Ernie and that’s all I’m focusing on.”

Whoever he plays with, it won’t be during the first session of play on Thursday (Wednesday night in the U.S.). Captains Els and Tiger Woods announced the first five fourball matches for day one, and Smith will be sitting on the bench. Reed, however, will be competing in the opening session. Woods paired him with Webb Simpson, and they’ll face off against the International team of Hideki Matsuyama and C.T. Pan.