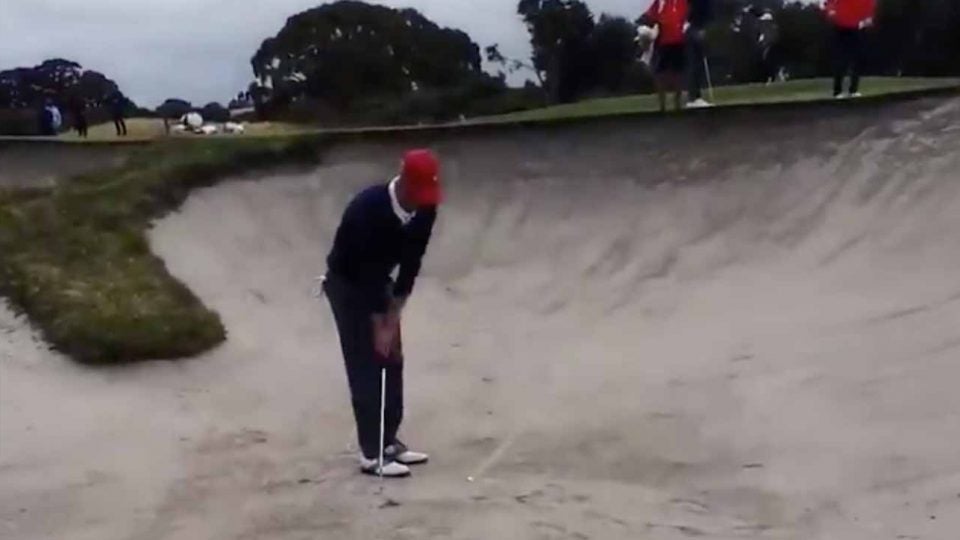 Heading into this week, there were major questions as to how the U.S. Presidents Cup Team would handle Patrick Reed’s rules controversy. Ignoring it? Impossible. Team captain Tiger Woods addressed the matter in a press conference on Tuesday before taking to the course with Reed, Patrick Cantlay and Justin Thomas.

Woods took a measure approach in his comments to the press; Thomas went with a different strategy. In the video, posted by Australian pro Adele Huggard, Thomas steps into a bunker and, noticing his ball is in a plugged lie, looks over at Reed and takes a well-aimed shot at his teammate.

Putting his wedge behind his ball, he takes the clubhead away, flinging sand backwards in the process — much like Reed did in a clip from this weekend’s Hero World Challenge that you’ve likely seen by now.

What this all means — and how both the players and fans will react — remains to be seen. But one thing we know for sure: it’s not going away anytime soon. Check out the clip below.

JT getting a bunker lesson from Patrick Reed @presidentscup Practice Day 1. 📸: @smartcommercialgroup Thanks to John Smart from Smart Commercial Group for the footage . #TeamWork #SmartCommercial #PresidentsCup

If you’ve chosen to spend your December blissfully golf-free until this point, we understand. To catch you up to speed, on Friday Patrick Reed ran into a bit of an incident with the rules at the Hero World Challenge. At the par-5 11th, Golf Channel cameras captured him sweeping away a suspicious amount of sand during practice swings. The clip spread like wildfire across social media, leading to strong reactions from golfers everywhere, Tour pros included.

The fallout was swift: Reed was penalized two shots when he got into the scoring area for improving his line of play; he wound up losing the event by two. Older video surfaced of Reed at the same event doing something similar. A larger discussion began about cheating, the role of the Tour and of Reed’s peers in policing the incident. The International team took a couple shots his way. Rory McIlroy threw his opinion into the mix. Across the golf world, Reed takes have been flying left, right and center — and the actual event is still two days away.