AUGUSTA, Ga. — Fiery, aggressive and superstitious, Patrick Reed has been building to this Masters moment his entire life. His swing is locked. His putting stroke is pure. He’s even seeing the ball better thanks to new contact lenses. His longtime coach says he loves working with the 27-year-old Texan because “he never pumps the brakes.”

On Saturday afternoon, with Rory McIlroy firing darts in the group in front of him at rain-softened Augusta National, Reed hit the gas. Sunday they’ll go head-to-head in a replay of one of history’s most spectacular Ryder Cup matches.

Reed posted a five-under 67 that included thundering eagles on both back-nine par 5s. He’s 14-under through 54 holes, good for a three-shot edge on McIlroy. Before this week, Reed’s greatest golf moments have come in international team competitions, particularly that epic Sunday at Hazeltine in 2016, when he clipped McIlroy 1 up in a head-to-head singles match that featured a barrage of birdies, primal screams and over-the-top histrionics. Fun? Yes, it should be fun. And if tomorrow’s showdown bears any resemblance to their Ryder Cup grudge match, it could be absolutely bananas. When McIlroy birdied 18 here Saturday – after his tee shot caromed off a pine and back into the fairway – it capped a 7-under 65 that he punctuated with a Ryder Cup-esque yell that could serve as a prelude to Sunday. McIlroy has his legacy on the line: he’ll chase his fifth major, his first green jacket, and his chance to become the sixth player in history to complete the career grand slam.

“I rode my luck a little bit out there today. Hopefully I don’t have to rely on it too much tomorrow,” McIlroy said.  “But yeah, just a great day. To get myself into the final group, you know, and have a chance to win another major, I’m excited.  You couldn’t ask for much more out of today.” 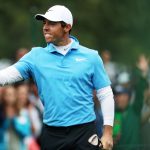 Sunday he’ll have to run down Reed, who has summoned the same magic that has defined his dominance in team events. On the back nine on Saturday, Reed reached the iconic par-5 13th in two and buried a 14-footer for eagle. On 15, after his approach stuck on the rain-soaked bank fronting the green, he pitched in for yet another eagle and capped it with a fist pump and a howl that Ryder Cup fans know well.

On 13, McIlroy went for the par 5 in two and sent his shot into the bed of azaleas far left of the green. With flowers blossoming around his waist, Rors deftly punched the ball back down to the fringe and saved par.

“It was a sea of pink. I was lucky just to see the ball, and I had a stance,” McIlroy said. “You know, azaleas are actually pretty thin down below. I could take a stance and just sort of pick the club straight up and get it back down on top of it and just trundle it out through the pine straw and back on to the grass.” He then added a birdie at 15 and canned a 17-footer for that stunning finish on 18.

But just as he did in their Ryder Cup clash, Reed matched McIlroy shot-for-shot. When McIlroy eagled 8, he pulled into a tie for the lead. Reed promptly poured in a 9-foot birdie on 8, then jarred a 25-footer on 9 and carried the momentum to the back nine.

“One thing I admire about him is his aggressive style. He’s an explosive player,” said Kevin Kirk, Reed’s coach since 2011. “He’s been trending the right direction for a while now. As a coach, you try to steer him toward peaking at the right time. I feel like we’ve got it right.”

This week Reed is using a more detailed hole-by-hole game plan he developed with Kirk after landing in Augusta last week. As for those new contacts: they date back to a moment in February when Reed was lounging in his Palm Springs hotel room with his wife, Justine, during the CareerBuilder Challenge. Justine was channel-surfing through the guide menu from across the room when Reed perked up.

“He looked at me and said, ‘You can read that?'” Justine said Saturday along the fairway ropes. “Now he has his lenses, and he’s getting used to them. It takes him about 10 minutes to put them in every morning, but it makes a difference.”

This is the first event Reed has ever played wearing contacts and despite the disruption to his morning routine, the payoff so far seems worth it.

Here’s one Reed superstition: at night the couple plays Mario Kart, the iconic Nintendo game. (Reed’s character is usually Toad, because he’s the fastest in the corners.) With Reed and McIlroy both clicking, Sunday could feature even more video game-type shots.

If somehow things go sideways for Reed and Rors, Jon Rahm (-8, six back) and Rickie Fowler (-9) matched McIlroy with 65s of their own on Saturday and will play in the penultimate pairing.

“There’s a lot more players in this golf tournament than just Patrick Reed and I,” McIlroy said.  “I know guys can get off to hot starts on a Sunday here, and you get a bit of momentum and do something.”

But make no mistake, this Masters should be won and lost in the final group. Last year Reed wore his red, white and blue gear at several events. This week he’s in more traditional garb, but when the skies opened up he unsheathed a Ryder Cup team umbrella. On Sunday, Ryder Cup vibes wouldn’t be such a bad thing. If he continues to pile up birdies, Reed could make history on his way to Augusta’s iconic green threads.

Among the records currently in play: the all-time scoring record (18 under, shared by Jordan Spieth and Tiger Woods) and a chance to become the first player in Masters history to shoot four rounds in the 60s. Despite his own run at the career slam, McIlroy thinks the heat is squarely on his opponent.

“I feel like all the pressure is on him.  He’s got to go out and protect that, and he’s got a few guys chasing him that are pretty big‑time players. He’s got that to deal with and sleep on tonight,” McIlroy said. “I feel like I can go out there and play like I’ve got nothing to lose.”

The duel could go either way, but one thing is absolutely certain: neither Tiger Woods nor Phil Mickelson will factor in Sunday’s drama. Teeing off four hours before the leaders, Mickelson shot a 74 that included an embarrassing whiff from under the trees on the opening hole. Woods sputtered along to an even-par 72.

But if Reed-McIlroy II is even half as compelling as their Ryder Cup clash it will be a Sunday to remember. So, when your less-golf-inclined friends ask you Sunday morning if Tiger’s going to win today, don’t mince words. Just say no.

Then tell them to staple themselves to the couch. The greatest head-to-head duel in modern golf history is primed for a sequel.