Every week GOLF senior writer Michael Bamberger identifies — and ranks — the absolute, undeniably, very best things in golf right now. This week, he predicts the next rules debacle on Tour, discusses slow play on Tour, and much more.

7. Best Defense of Live Under Par

The Tour’s newish marketing phrase, Live Under Par, is creeping toward its first birthday. At this point, everybody knows that its first word rhymes not with jive but with give. Lee Westwood’s Twitterverse commentary about the three-word campaign has run its course. (“Clearly they don’t know that being under par in the UK means you feel like crap!!!”) But are you living and loving Live Under Par? The Tour says it is. This supportive message of the campaign (in response to a GOLF.com inquiry) comes straight outta PVB:

“The Live Under Par campaign delivered exceptional results during 2017-’18 on all key performance metrics that the Tour measures. It contributed to significant TV ratings, digital content consumption and social media follower growth across all four of the Tour’s strategic fan segments.

“Through our partnership with Samsung, the Tour is now able to measure and report the number of incremental TVs driven to broadcasts by our advertising and quantify its positive impact on ratings.

“The PGA Tour remains committed to the campaign and will be using it to help tell the full story of the 2018-’19 season. The first new Live Under spot of the season aired in October, a second began airing during Farmers week in January, a third is currently under development and more are planned prior to the end of the season.

“The Tour’s media investment behind the campaign has not been reduced.

“Live Under Par is fully integrated across the Tour’s content platforms and many other initiatives, such as merchandise programs, volunteer training, employee communication, charitable activities and influencer and player social content.

“This summer, Darius Rucker will help the campaign message cross over into the music world by wearing Live Under Par apparel during his concerts.

“Fan reaction to and adoption of Live Under Par has been extraordinary. During the first six months of the campaign, Twitter mentions of Tour advertising increased 2000% versus the prior year and 95% of those mentions were positive in nature.”

If you’re looking for a golfing mogul, your first stop is Herb Kohler. Herb owns Whistling Straits, where the Ryder Cup will be played next year. If you’re looking for an instructor, the man-to-see is Mario Tiziani in Madison, who is also Steve Stricker’s brother-in-law. But if you need to know anything else about Badger State golf, Gary D’Amato is one-stop shopping. He was the golf writer for the Milwaukee Journal forever and now writes for Wisconsin.golf. He probably knew that Steve Stricker was going to be the 2020 Ryder Cup captain before Stricker did. If Erin Hills is ever going to get another U.S. Open (not too likely), Gary will certainly know before Steve Trattner does. If Trattner is going to get paroled out of Waupun Correctional Institution anytime soon (not too likely), Gary will break that news, too.

5. This Week in International Man of Mystery

For this Stateside reporter, the most mysterious entrant in a big-name tournament this week has to be Matthew Millar, playing in the WGC event in Mexico City. Per Google, he’s a 42-year-old Aussie who has played in one major championship. Per seating chart, he will likely have a locker next to defending champion Phil Mickelson. He may very well have a relative named Pete, but he is not related to Peter Millar of Worth Avenue, Palm Beach, and other uptown shopping districts. That Peter Millar is an invention.

In the wake of his victory last week at Riviera, J.B. Holmes said he used to be a slow player, but no longer is. But he is. He’s painfully slow. On this matter, it is helpful to remember what fast players have known forever: nobody ever admits to being slow. The role-models of ready-golf these days on the PGA Tour are Rickie Fowler, Rory McIlroy and Brandt Snedeker. Unfortunately, they are the exceptions. It’s really not that hard. You start preparing for your next shot the moment your preceding shot comes to rest. 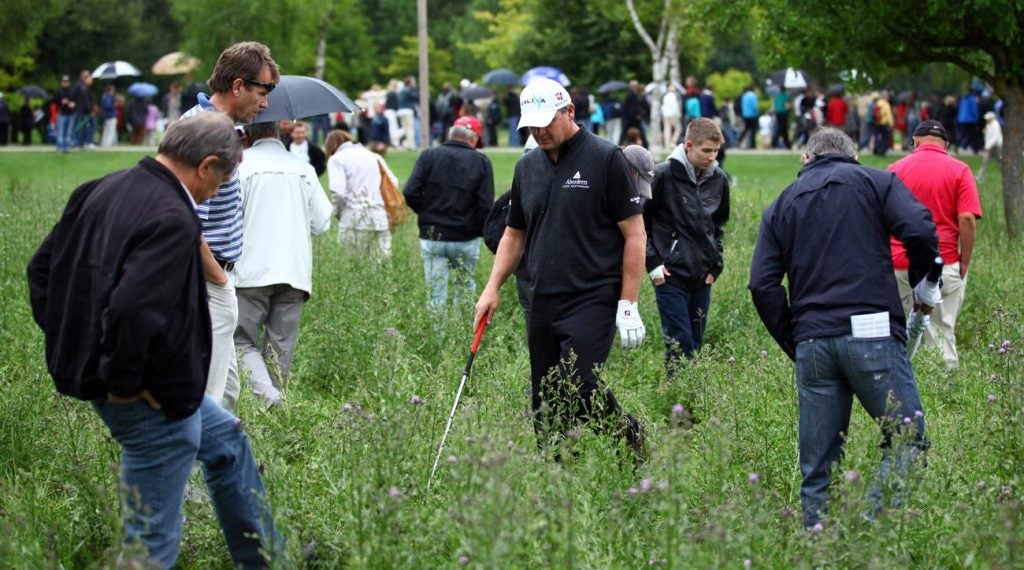 Paul Lawrie looks for his lost ball during the 2011 BMW International Open.
Getty Images
3. Most Likely Next Tour Rules Debacle

An educated guess is that it will come from the new three-minute ball-search rule, down from five. Very few players wear watches, for one thing. Fewer yet have any notion how fast three minutes goes when you’re desperate. It flies. At the Honda tournament, at the U.S. Open at Pebble Beach, at the British Open at Royal Portrush — at any course with rough — this new rule is bound to cause a mess. The clock starts when the caddie or the player arrives on the scene. Fan search does not count against you. Expect to see some really anxious players doing some really slow walking.

2. This Week in Trump Golf History

This week’s WGC-Mexico City used to be the WGC-Cadillac Championship, played at Trump Doral, about eight miles from the Miami International Airport. Donald Trump, then a real-estate mogul and TV personality, was on hand when Patrick Reed won in 2014. Trump’s sum-up was a model of brevity: “Fantastic turnout, fantastic galleries, a fantastic winner,” he said. “Really, couldn’t do any better.”

Courtesy of Miguel Angel Jimenez of Spain and the Dominican Republic, winner of last week’s senior event, in which Olin Browne carried a two-shot lead to the final hole, where he made a double, which meant a playoff for the title: “Pitiful for Olin, no?” That is, he felt for the man.