Was this the moment Tiger Woods knew he’d win the 2019 Masters? 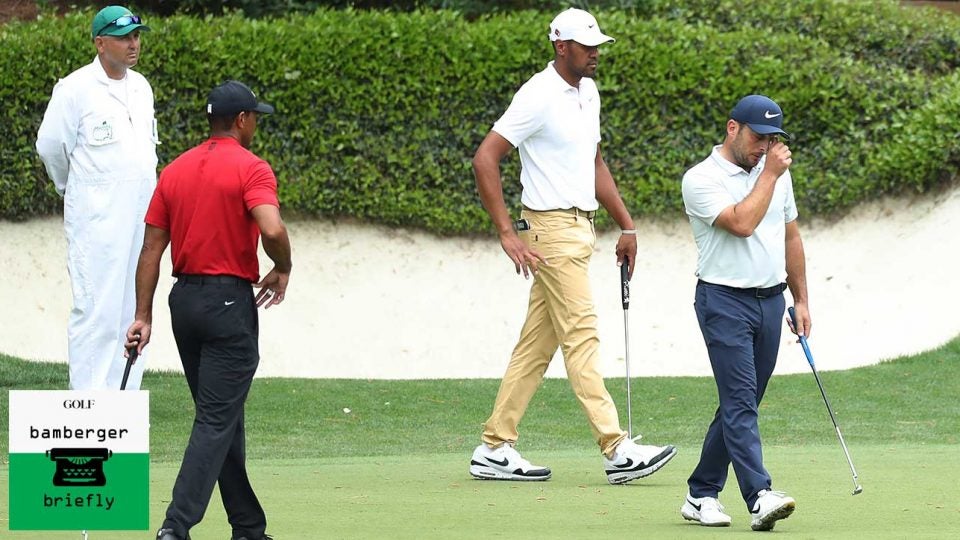 Tiger Woods, Tony Finau and Francesco Molinari play the 12th hole at Augusta National in the final round of the 2019 Masters.
Getty Images

When golf fans speak of last year’s Masters, they almost all say the same thing: When Francesco Molinari hit it in the water on 12 they knew it was over. They knew Tiger Woods was going to win the Masters. Tony Finau, standing on the tee beside Molinari and Woods, felt that. So did Jack Nicklaus, watching on a TV on a fishing boat in the Bahamas. Spectators on the scene felt that, too.

I was standing beside the right side of the 12th tee and I could see Molinari posing, as if he had hit a good shot. I couldn’t see his ball roll into Rae’s Creek from a band, but I heard a few cheers go up. It was a sickening sound. I felt it was over, too.

There really was no sound logical reason to conclude that. After all, Molinari could still get up and down after his drop and make 4. Tiger, after playing a conservative tee shot, could have three-putted for a 4. Those two could have gone to the 13th tee with Molinari still up by two shots.

Tournaments
Gentler Ben: 25 years after emotional Masters win, Crenshaw reflects on the game that’s given him everything

But that didn’t happen. Molinari made 5, Tiger made par and the Italian Detective’s lead was gone. Nobody seems to remember or care that they were still tied standing on the 15th tee.

“My coach told me that Tiger was giddy when he got to that green,” Finau told me in an interview months later. According to Nicklaus, Woods knew it was over then, too. If Woods felt that, he certainly has never said it.

Some commentators and fans thought it was bad form for Woods go to the 12th green and start looking at his putt and picking up little leaves off his line while Molinari and Finau prepared and played their pitch shots from the other side of the creek. I asked both Finau and Molinari about that. “He was absolutely fine,” Finau said. Molinari said the same thing.

If anything, you could say that Woods was being appropriate, preparing to play his next shot. Ready golf is a thing, in every flight. Woods wasn’t in their line-of-sight. He wasn’t playing some weird head game with them. If he was giddy it was because he was dry and they were not. He knew he still had a lot of work, to make a two-putt par there.

Woods was doing his work, that’s all. He was about to move from the passenger seat to the driver’s seat. The seat belt was coming off.