Men in Plaid Skirts: Just One Reason the RBC Heritage May Be the Most Fun on Tour 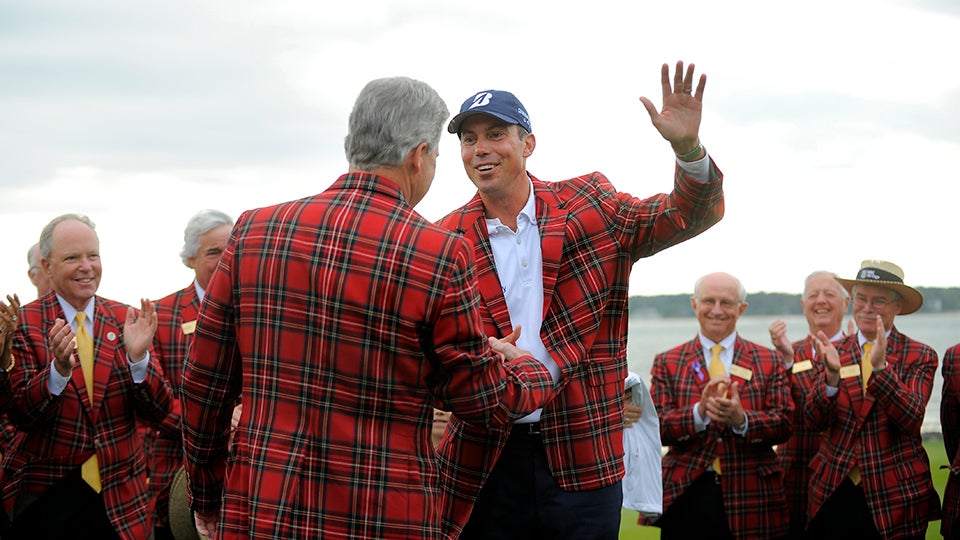 Matt Kuchar, center, received the plaid jacket from Jack Jones, vice president and general manager of Boeing South Carolina, after winning the final round of the 2014 RBC Heritage.
Stephen B. Morton

HILTON HEAD ISLAND, S.C.—It was just another day at the beach at the only PGA Tour stop that’s got a lighthouse, a marina full of luxury yachts and a backyard party at just about every other house on the golf course.

This is exactly why the RBC Heritage may be the most fun event on the Tour. It’s the Phoenix Open party with the sound turned down, plus water views.

It was far too beautiful not to go out and watch golf on a perfect but breezy Saturday afternoon at the Harbour Town Golf Links. I watched Russell Knox and Charley Hoffman tee off at the first hole, then quickly caught up to the Luke Donald-Patton Kizzire twosome at the second, a par-5, and thought this might be a good group to follow.

Before Donald and Kizzire finished launching their tee shots, however, I saw Him. And I immediately regretted my decision to leave my cell phone (and its camera) behind in the pressroom. Nothing good happens if you take your phone on the course. But this was a mistake.

It was Plaid Nation Day at the RBC Heritage, so fans were urged to wear the red plaid pattern that traditionally covers the champion’s jacket. I wore a grape-colored shirt today, sorry about that, and declined to don the free sunglasses the tourney offered with the red-plaid frames. What can I say? I’m a rebel. Live free or die. Don’t fence me in… at least not without cookies.

Anyway, a bunch of fans, mostly younger guys in their 20s mixed with one or two older gents, were in team uniforms ahead of the second tee. They all wore the same ghastly Hawaiian sunset shirts that were a mess of pink, yellow, a sick-looking color that has no name, and black. I counted at least ten members in the group, and I might have missed one or two. They wore assorted red plaid hats, some in that Justin Timberlake-Frank Sinatra style, some in Hogan caps. They resembled the least fearsome gang ever but did look like a party waiting to happen.

One plaidster stood out. Him. Well, Him sported a couple days’ beard growth on Him’s face, carried a Michelob Ultra can that He was busy draining, had the plaid hat, wore floppy sandals with no socks and… flaunted a red plaid mini-skirt. (No, it was not a kilt. I know the difference.)

This is more than you want to know but He had not shaved His legs. Plus, the skirt was pretty short considering the unpredictable wind gusts. I made a note to root for calm conditions.

“Check out Him, that guy in the skirt,” I told another spectator, who squinted and wanted to know if I was sure He wasn’t a girl.

I saw His five o’clock shadow and His legs. I was sure. After a long hard stare, the spectator agreed that yes, He was indeed a he. Other fans nearby overheard our comments and the word spread like hay fever.

A man walking behind me wearing a straw hat and sunglasses said, “You’d have to get me a whole lot of Michelob Ultra before I’d go out on a golf course wearing that,” and drew laughter from all those within earshot.

“I could probably make that happen,” I suggested.

He laughed in response. “Well, there can’t be any photographers or camera phones in the area, either,” he said.

That was a deal-breaker, I replied. Then I noticed a second man in the ghastly Hawaiian sunset shirt group, a little older, who had also gone for the skirt. As I passed by, I heard one of the uniformed plaidsters speak with a British accent. That figured, since this all felt like an old Monty Python sketch.

I didn’t ask the skirted gents their names or their story or what they might or might not be wearing underneath the skirts. That’s poor reporting, I know, but a little mystery goes a long way. I already knew more than I wanted.

Besides, as we migrated toward the third tee I looked to my right and spotted rookie Bryson DeChambeau on the adjacent seventh tee. I peeled off to watch him finish the front nine and left the PMS’ers (Plaid Men in Skirts) with Luke Donald, feeling confident they were sure to be seen across America during the telecast because the fantastic CBS camera guys don’t miss much.

I did go back out near the last few holes, my cell phone on silent in my pocket, looking for the Plaid Men in Skirts, but I didn’t find them.

I also failed to get a shot of the massive Boeing 787 Dreamliner (they’re built in nearby North Charleston, S.C.) that made a couple of strafing runs (or flyovers, as some stuffed shirts call them) over the course. Boeing is one of the RBC Classic presenting sponsors, and this BFP—Big Plane—rumbled over at its scheduled 4 o’clock time. There were too many trees in the way to get a clear photo. A pressroom colleague recorded some video on her cellphone but the plane looks like a toy drone in the footage from a distance. In reality, it’s gigantic—206 feet long and seating from 290 to 420 passengers—in other words, your brother-in-law’s entire wedding party.

I walked back to the press tent past the marina, where a number of boat parties in progress failed to invite me aboard. (Maybe it was my S.S. Minnow hat that scared them off, I don’t know.)

Approaching the press tent, I did see something else unusual. Apparently Matt Kuchar, who lives in the greater Atlanta area, drove here in his own car, an SUV made by BMW. He parked it right in front of the media center entrance, it so happens. I assumed it was his ride because the vanity plate said, The Kuch.

Kuchar won here two years ago, so I’m fine with ‘The Champ’ parking anywhere he wants. As long as he doesn’t wear a plaid mini-skirt.