It took all season (and his 80th victory) for Tiger Woods to climb back into the top 15 in the Official World Golf Ranking. He reached his familiar spot at the top of Masters betting odds much sooner. Suddenly, though, he is no longer the betting favorite to win the 2019 Masters. Or, at least, not the only betting favorite.

In the latest listing on Golfodds.com, Woods now has 12/1 odds to win his fifth green jacket at Augusta in April. Joining him at 12/1 are 2015 Masters champion Jordan Spieth and World No. 2 Justin Rose.

Rose’s odds make a lot of sense considering the recent tear he’s been on. The Englishman won twice on Tour in 2018 while racking up 11 top 10s. He hasn’t finished worse than T4 since August. He also has finished second at Augusta twice in the past four years.

Spieth’s odds are a little less defensible, at least at first blush. He had a rough year in 2018 (not counting his star-studded wedding), falling all the way to No. 16 in the latest World Ranking. But Spieth is something of an Augusta National savant. He’s only played in five Masters, finishing T2, 1, T2, T11, and 3. Enough said.

Woods is coming off a disappointing performance at his own Hero World Challenge event in the Bahamas. He struggled to get it going all four rounds, eventually finishing 17th in the 18-man field. But Tiger is also still fresh off capturing his 80th PGA Tour victory at the Tour Championship, and he nearly won both the Open Championship and PGA Championship this summer. Tiger has also proved time and again that he can compete at Augusta even when his game is in tatters. 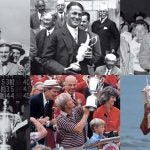 They all beat out reigning U.S. Open and PGA champion Brooks Koepka, who comes in second at 14/1 odds. You can check out a longer list of Masters odds (through 50/1) below.