Masters 2019: The returns are in, and Augusta’s revamped 5th hole is a beast

AUGUSTA, Ga. – Pop quiz, golf fans: what do you get when one of the hardest holes at Augusta National is stretched out to unprecedented lengths, pocked with fairway bunkers and capped with a perilous putting surface?

Thursday we learned the answer, and the answer is bogey. Many, many bogeys.

During a bright and steamy opening round to this 83rd Masters, 87 players passed through Augusta’s revamped par-4 5th hole, known as Magnolia. Fifty-seven players made par, 24 recorded bogeys, two made double and four prosperous pros skated off with a birdie. If you’ve just tuned in, it’s not like this hole used to be easy. Entering the week, it ranked as the fifth-toughest hole in Masters history, with a 4.26 scoring average. It has always landed a few punches. Thursday it ramped up to whack-a-mole.

Magnolia’s new era officially began at 9:25 a.m. Thursday morning, when the opening threesome strolled off the fourth green and hoofed it back to the freshly cut tee. That box is now situated 40 yards farther back, and it’s centered in a lovely clearing of shrubs and pines that didn’t exist this time last year. History will forever remember that Adam Long, a 31-year-old from New Orleans, christened the new Magnolia with a 285-yard blast up the left side of the fairway that landed just outside the hole’s treacherous twin bunkers. After his ball found land, Long quickly passed his driver to his caddie and flashed a look that could be shared by anyone who finds the short grass from now on: Phew.

Here’s what’s new: thanks to those 40 extra yards the hole now plays a stout 495. The two bunkers up the left used to require a 313-yard carry, and this year it’s 315, which means those menacing traps have also been shifted up the fairway to remain in the firing zone. Guys who used to hit 7- and 8-irons for their second shots will now need 4- and 5-irons. There’s also a new flat(ish) spot on the left side of the green, which will likely be used as a pin position this week. It’s ironic that Magnolia is named for one of Augusta’s most ubiquitous trees species, which line the famous path up to the clubhouse. Players get a rush from that entrance. It’s where hopes and visions thrive.

Now Magnolia is where Masters dreams might crash and die.

Emiliano Grillo became one of the first to feel 5’s new bite. He sent his tee ball right of the fairway and onto a patch of soggy terrain that had been pelted with early-week rain and then trampled by spectators. His ball rested on a mix of sand and fine pellets Augusta calls “choker sand,” which is dyed Masters green and sprinkled onto soft spots outside the ropes while you’re sleeping at night. Because the storms hit hard, there are more mushy spots than usual this week. Grillo wandered over and frowned when he saw his mud-spackled ball resting in a precarious spot. He selected a long iron.

“Commit to the shot,” said his caddie, Jose Campra.

Grillo let it rip, but his ball came out low and faded right of the putting surface. “Ah…f—,” he said. He made a bogey. 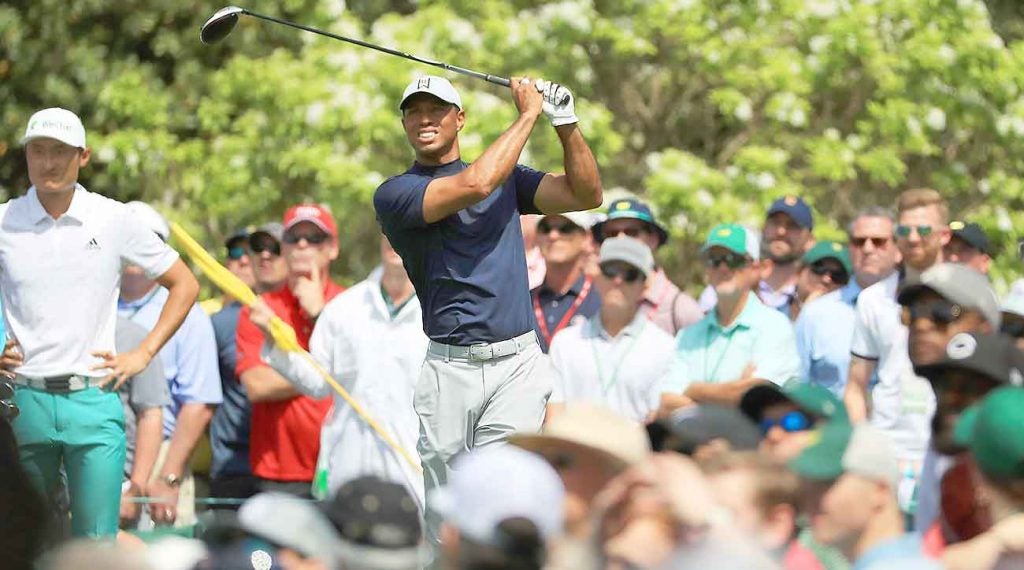 Tiger Woods drove it into a fairway bunker on No. 5 on Thursday and eventually made a bogey.
Getty Images

About two hours later, Tiger Woods strode back to the new fifth tee one under par and looking chipper. Earlier this week he declared Magnolia’s new fairway bunkers “unplayable,” so there’s no doubt he intended to avoid them. He took a rip with driver and immediately barked, “Go left!” No dice. His ball plummeted into the sand. Woods blasted out, wedged it to five feet and lipped out the putt for his first bogey of the tournament.

It’s been quite a journey for No. 5 to finally step into the spotlight. When he first designed the hole, Bobby Jones drew inspiration from the Road Hole at St. Andrews, and he wanted players to stress over their second shots. But despite those grand intentions, for many years No. 5 was best known for being known for absolutely nothing. A 2014 Sports Illustrated article described Magnolia as an “out-of-the-way hole where birds peck at worms in the fairway and history is never made.”

Enter the green jackets. A few years ago, Augusta National bought Old Berckmans road, which ran parallel to the 5th fairway, and rerouted it. With fresh acreage at its disposal, the club erected the spectacular, ultra-exclusive hospitality pavilion, Berckmans Place, behind the 5th fairway trees. It was only a matter of time before they went to work on the hole itself. And that tee always sat just a tad close to the 4th green. Golfers in both spots always had to be mindful of each other. According to plans filed with the city, the club planted more than 600 new trees, flowers and bushes to make the new tee feel like it’s been sitting there for generations. It’s impressive, and it was no doubt a massive undertaking.

“As a superintendent, I mean, what a nightmare,” said Mark Richard, who runs the grounds at Kirkbrae CC in Lincoln, R.I., and attended Thursday as a fan. “A spectator can never understand what happened here, but Augusta has resources, and it’s seamless. You don’t see what they’ve done.”

Magnolia may be a beast for competitors, but fans have never had it better. The area around the tee box is open and pleasant. You could probably fit a thousand perspiring patrons in that spot alone. Also in a new twist, spectators can now stroll up the left side of the fairway, which keeps crowds thin and offers fun new views of the hole.

“It’s awesome,” said Phillip James, a Chapin, S.C., native who’s attending his 20th Masters. “What I really like about this is that nobody knows it’s back here. You can get up close and personal.”

James has a point, but it’s easy to envision savvy patrons flocking to Magnolia before long. James’ 12-year-old son, Harrison, certainly enjoyed it. He was the only youth along the ropes Thursday morning, and both Angel Cabrera and Danny Willett tossed him game-used golf balls as they strode to the tee. “I’m not moving!” Harrison said happily.

Get used to it. This new Magnolia isn’t going anywhere.