[This story originally appeared in Sports Illustrated Golf+ in April 2016.]

Like a gambler on a roll, the Masters became the Masters from the hot streaks it has enjoyed now and again. Consider this four-year run: From 1951 through ’54, Ben Hogan and Sam Snead took turns slipping on the green jacket. World War II was in the country’s rearview mirror, leisure time was expanding, and the new U.S. president (in time for the ’53 Masters) was a golf nut. Hogan and Snead, both caddie-yard graduates, duked it out in front of Bobby Jones and Cliff Roberts, the founders of the Augusta National Golf Club. Hogan and Snead were the game’s greatest talents, self-taught and briny, and there was an undercurrent of antipathy between them. Not that you could read about that in your morning paper. Coverage was basically one-dimensional, and golf on TV was embryonic at best.

In fact, through the mid-’50s, the tournament was essentially a high-status, super-clubby get-together, a prized invitational, made special by the course and its condition and, most particularly, by the presence of Jones. The Masters wasn’t a championship. It was, as Jack Nicklaus has observed, “a nice event.”

And then came Arnold.

The Masters (you could argue) became the Masters we know and love and venerate in a nine-year stretch during which the tournament went from a black-and-white afterthought to a live, gather-the-family color-TV show, on a stage that rivaled Churchill Downs for grandeur, featuring protagonists you could not find in Hollywood. Drumroll, please:

Good luck topping that. The play in those nine consecutive Aprils was so arresting, it allowed golf, and its annual rite-of-spring event, to take a seat at the grown-up table of the wide world of sports.

Warning: high-speed highlight reel coming at you. On Sunday of the 1958 Masters, Palmer got a bad ruling on an embedded ball at the 12th hole, took matters into his own hands and won by a shot over Doug Ford and Fred Hawkins, and by two over his final-round playing partner, Ken Venturi, who simmered about what happened at the 12th for decades. In ’59, Wall won with Palmer and Cary Middlecoff chasing. In ’60, the year that Augusta National unveiled the relation-to-par leader board, Palmer won by a shot over Venturi, a loss that in time served Venturi well: He funneled his unrequited love for Augusta into a romantic 35-year run as a Masters broadcaster for CBS. In ’61, Player finished a shot ahead of Palmer and an amateur—an amateur!—named Charlie Coe, who went by the nickname Bucket. In ’62, Palmer won in a three-man 18-hole Monday playoff over Player and Palmer’s close friend Dow Finsterwald. In ’63, Nicklaus, all of 23 and already a U.S. Open champion, won by a shot over Champagne Tony Lema. In ’64, Palmer won the fourth of his green jackets and the last of his seven major championships. In ’65, Nicklaus won by nine over Palmer and Player, setting a scoring record and hitting short irons into the back-nine par-5s. (“He plays a game with which I am not familiar,” Jones famously pronounced.) In ’66, Nicklaus became the first player to win in consecutive years, taking an 18-hole Monday playoff over Gay Brewer and Tommy Jacobs. Now breathe.

There’s a reason why the trio of Frank Chirkinian (who began directing the CBS Masters telecast in 1959) and Dan Jenkins (who started covering the Masters in ’51 for the Fort Worth Press) and Herbert Warren Wind (who began covering the Masters for SI in ’55) are all in the World Golf Hall of Fame, alongside the holy trinity of Palmer, Nicklaus and Player. They were documenting something exciting and new, and the sports-loving public couldn’t get enough of it. 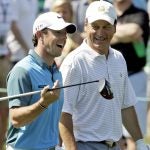 You may also like Jeff Knox: The Masters marker everyone wants to play with at Augusta

What material they had to work with! Palmer was the ultimate full-throttle golfer. For all of his big-boy firepower, Nicklaus had even more brainpower, and he gave you the hope that intelligence, applied assiduously, could make you a better golfer. Player, about as handsome as Cary Grant, pushed himself onto the main stage through sheer willpower. They were each an inspiration. They made you want to play.

“What Arnold and Jack did in those years, in tandem, was really quite remarkable,” Sandy Tatum said recently. Tatum, 95, is golf’s reigning elder statesman. Back then he was a San Francisco lawyer rising in the USGA’s hierarchy. (His ascent finished with an influential presidency.) The Masters has been played 79 times, and Tatum has watched most of them, either on TV or in person. “Arnold’s sexual energy was palpable, a feature of the whole experience,” Tatum added. “If golf had ever seen anything like it before, I certainly didn’t know about it.” This is a considered opinion. As a boy, Tatum spied on Katharine Hepburn while the silver-screen beauty played furtive golf with Howard Hughes.

As for Jack: “Augusta National was a course that required a certain golf intelligence to play well, and Nicklaus exhibited an understanding of the course that was marvelous and profound,” Tatum said. He was straining through the infirmities of age to express ideas that are essential to his worldview, that greatness comes from abilities for which there is no standardized test. “Jack’s only equal, in terms of playing cerebral golf, was Jones,” Tatum said. Seven of nine, won with either power and charisma (Arnold) or power and intelligence (Jack). Plus, they both putted lights out. Nope—there’s no topping that.

And now we interrupt this Arnold-Jack reverie to bring you 1959, Art Wall’s year. “Dad slipped in there,” his son, Greg, said recently, as he considered his late father’s company in the ’58–66 lineup. But Greg Wall, a Pennsylvania teaching pro, was being modest. Art Wall Jr. won 14 times on Tour. Like Palmer he was a Pennsylvanian, born and raised, and on the practice tee before the Sunday round in ’59, Palmer, the defending champion, said to Wall, “Let’s keep the jacket in Pennsylvania.” Wall did. He won by shooting a Sunday 66 with birdies on five of the last six holes. Palmer eased Wall into his club coat that night, and Wall returned the favor the following April. He attended the champions dinner every year for the rest of his life, and after he died in 2001 at age 77, his widow, Jean Louise, received a note from each of the Big Three. “That win meant the world to him,” Greg Wall said. “Dad knew he was a good golfer, but he never thought he was at their level. He always said, ‘I caught lightning in a bottle that week.’ Gary Player told me, ‘Your dad’s Masters was the best win that nobody knows anything about.'”

Greg’s film archive of the event consists of CBS clips showing his father making Sunday birdies on 17 and 18, with Jim McKay providing the play-by-play, handicapped by a severe lack of on-course information. (The CBS crew had six walkie-talkies.) Those last two holes are all Greg has. These days we know when the caddie gets out an energy bar for his man.

Wall’s win was Chirkinian’s first year at the helm of the CBS telecast. His longtime deputy at CBS, Chuck Will, wasn’t there that year, but he knows exactly what the nine-year period meant to Chirkinian, to golf and to the Masters. In Will’s intensely personal view of that era, golf’s Big Three were not Arnold, Gary and Jack but Arnold, Frank and Jack. Will, who is 90, became friends with Chirkinian in the 1940s and went to work for him in the ’60s.

Chirkinian’s genius as a director cannot be summarized on a scorecard. He and Larry Bird had the same thing—a sixth sense for what was going to happen next. Chirkinian brought a you-are-here intimacy to his Masters telecasts, along with Hitchcock-like timing. “The cuts he made,” Will said, using a director’s term. “The cuts, the cuts.” Chirkinian also had an obsessive desire to improve his show. The 1959 broadcast was primitive, but the ’66 show, the first in color, feels almost modern, and in various ways is better than today’s telecast. For one thing, there was far less chitchat. The announcers—Middlecoff, Henry Longhurst and Byron Nelson among them—made every word count. Chirkinian was directing theater without a script. Not easy.

Yes, it helped mightily that four of the notable nine were won by Palmer. But Will believes that Chirkinian did as much for Palmer as Palmer did for Chirkinian, that the Masters helped make both men, but that the two men helped make the Masters too.

“Arnold was built for the camera,” Will said the other day. “He was flamboyant. He walked off that tee and he was striding. He was leading and he was going to win again. But they needed somebody to put that camera on the guy’s face and know exactly how long to leave it there, and that guy was the little Armenian.” Will continued in this vein for a while, and then he began to weep. He loved the man.

If you could win only one major, which would it be? Once there was only one answer for Americans, but not anymore. There are surely players today who would pick the Masters and not the U.S. Open. The nine highlighted years would have influenced that decision more than Jordan Spieth & Co. could know.

Tom Weiskopf came up in a different era. He grew up on the U.S. Open and today, at 73, still regards it as the king of the majors. He won one major, the 1973 British Open. But the major he enjoys the most, the tournament that plays and replays most vividly in his mind, is the Masters, where he finished second four times and which he covered a dozen times for CBS.

As a high school golfer in the late 1950s, Weiskopf would stand over practice putts and say, “This is for the U.S. Open.” But by the time he turned pro in the summer of ’64, he started to think about making putts to win the Masters. He watched all four of Palmer’s victories on TV and concluded that the Masters was his best chance to win a major—if he could get into its intimate field. And then in ’68 he did.

“I remember when the telecast went color, the richness of it—the holes just came alive,” Weiskopf said recently. “And then I got in, and I couldn’t get enough of it. The week before my first Masters, I came over from Greensboro and I was playing 36 a day.” He was finally playing the holes, all the while remembering how they had been played.

Recalling Palmer’s four wins and the three Nicklaus amassed quickly, Weiskopf said, “You can think back to those tournaments and you can remember the shots, because we know the holes so well, from seeing them every year. I know the shots Arnold hit. I know the shots Jack hit. They’re part of your memory.”

Of course! This insight makes you realize, that memory and era are inextricably linked, like the index finger and the pinkie on an interlocking grip. What is a memory not attached to an era? A stray nugget destined to fade away. But these nine events were an era, the era when the modern Masters was invented. The nine Masters tournaments from 1958 through ’66 were a harmonic convergence of skill, personality, expanding technology, bunched leader boards and exquisite timing. They were not invented by a marketing department, or even by a clever headline writer. No. This grand run was made possible by a small group of true originals, aided and abetted all the while by … us.