#AskAlan mailbag: How would you have handled the Matt Kuchar-Sergio Garcia controversy?

What’s better than one #AskAlan per week? According to my editors, two. So we’ve recently begun a new tradition: for the midweek edition I shall answer queries about the just completed tournaments and related concerns. For a second column every Friday, we can entertain more miscellania, venturing into the dark, shadowy recesses of your collective conscious. Thanks as always for the questions…

How would you have handled the Kuchar/Garcia brouhaha? Personally, if I’m Kooch, I tell the rules official that I had conceded the putt and move on. #AskAlan -Daniel (@68shooter)

This was such an utterly fascinating kerfuffle that days later it remains a collective obsession. Of course it had to involve the naughtiest boys on Tour (this year, anyway). If the exact same thing had happened between, say, Xander Schauffele and Marc Leishman, no one would really have cared. But for many people Gimmegate amplified and/or confirmed suspicions created by Garcia’s and Kuchar’s previous controversies: the former is impetuous, bratty, entitled, possibly unhinged; the latter duplicitous and fake. Garcia certainly created this mess by blowing his little putt in a fit of pique. To play the victim and blame Kuchar is weak sauce. Garcia screwed up and deserved to lose the hole, full stop. It’s been fascinating to see so many Tour pros and caddies rise up to pin the blame on Kuchar. The common refrain is that he should have lied to the rules official and said he conceded the putt. It’s funny that in a game that venerates truthiness, self-reporting and rigid, rules-are-rules morality, Kuchar is being killed on social media for not perpetuating a bogus falsehood. The whole thing happened so fast I’m not sure Kuchar had time to do a cost-benefit analysis on winning a hole versus getting dragged into another sordid controversy. I think it’s more likely he was acting on instinct, which, despite the omnipresent smile, is to be a hard-ass. For this he has my approval. 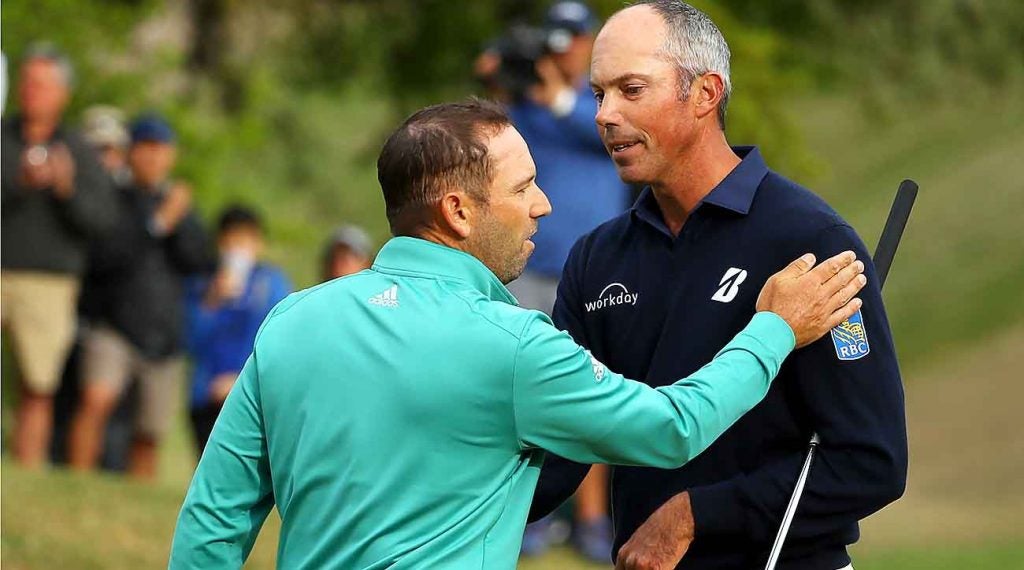 Sergio Garcia and Matt Kuchar, after their controversial match on Saturday.
Getty Images

Any credence to the theory that it actually was a good thing Tiger lost in the quarterfinals? Among other things, it let his body rest up, especially given the cold weather on Sunday morning? He showed his game is ready to step up a la beating Rory and no sense risking injury less than two weeks before Augusta, right? -@KeithKHorton

Put another way, is it better to accrue mental scar tissue or risk pushing his body too hard? I want to see Tiger stay healthy as much as the next guy – more, perhaps, since I still have to put my kids through college – but missing a do-or-die four-footer is the worst imaginable prep for Augusta National. Think of all the important putts Woods has missed since his last Masters victory. It started on the back nine against Y.E. Yang, continued a few weeks later on the 72nd hole at Liberty National, afflicted him badly in Masters near-misses in 2010 and ’11, and perhaps reached its nadir last summer on the 11th hole at Carnoustie. At his peak, Tiger was the greatest clutch putter of all time, and maybe the best pure putter ever. Now he ranks just 78th on Tour in Strokes Gained: putting and he’s even shakier from close range. Beating an overwrought McIlroy was nice but even in that match Tiger did not play great golf. Yes, it’s helpful to keep the mileage down heading into Augusta, but what does it matter if Woods struggles on the greens? My takeaway from the Match Play is that Tiger had a clutch putt he absolutely had to make and he couldn’t do it.

#AskAlan Wouldn’t the Match Play be a lot more exciting if they limited it to a 32-man field? You’d get a lot more Tiger-Rory type matchups with 8 groups vs. 16 and one less double day would mean less fatigue and better play at the end. -@Brianros1

That would definitely ensure more marquee matchups but also eliminate charming underdogs like Kevin Kisner, Kevin Na and Lucas Bjerregaard. Without those guys it’s just a match play Hero World Challenge. We all love the idea of match play but the reality is that such a tournament can be lacking from an entertainment standpoint. It’s time for the Tour to inject some pizzaz into the proceedings. Start by eliminating pool play and reinstating single-elimination, obviously. Keep 64 players and play the first round based off the World Ranking but for every round after that the matchups are determined not by a fixed bracket but a secret panel, ideally comprised of me, Bamberger and a few Twitter randos. (Or Tour and TV execs, if necessary.) So every round we can be guaranteed juicy matchups. It would add another element of suspense/showbiz as we announce the pairings – what is more delicious than Saturday night at the Ryder Cup as we await the singles draw? The Match Play needs some help. Time to be creative.

News
Tour Confidential: Could the Sergio Garcia-Matt Kuchar concession controversy have been avoided?

Can we go ahead and slot Kisner for the next 10 Presidents/Ryder Cups? Thanks, I’ll hang up and listen. -Matt (@Landmannery)

He could have been a difference-maker in Paris except he spit the bit at both the 2018 Open Championship and PGA Championship and that clearly spooked Cap. Furyk. But some guys are just made for match play and clearly Kisner is one of them. He’ll certainly be a Presidents Cup pick later this year and hopefully Kiz plays well enough to break into the Ryder Cup clique, because no one will want to play him at Whistling Straits and beyond.

Has anyone in history had a Strokes Gained Controversy as high as Kuchar? He may kick a puppy during Masters week to ensure victory. #AskAlan -@GolfingBrock

I’m honestly much more intrigued by this flawed version of Kuchar. He’s always been a little bit private and somewhat unknowable. We’re finally getting to see the real Kuch – it’s messy and human and way more interesting.

After Suzann Pettersen and now Sergio should we just retire the gimme? #AskAlan -@GregFlat9

Oh, gawd no! It’s such a delicious part of match play. I love giving an opponent a bunch of 3- and 4-footers early in a match and then, when an important one arrives, offering stony silence. This kind of strategy (gamesmanship?) was on full display in Austin and it only adds to the intrigue.

Do you think Tiger missed his putt on purpose? -@Jbayzzz

Tiger Truthers are a different kind of cat.

Listening to Rory the night before he had to play Tiger I really felt like he didn’t want to play him. As a Tiger fan I loved it. Am I alone in thinking Rory psyches himself out? -@Darryl_MacNeil

You would be alone in thinking he doesn’t.