MEDINAH, Ill. — On Thursday night, some of the Medinah members were complaining, in that country-club way, about Justin Thomas’ 65, widely described as the course record. ‘Not so!’ they said. Al Geiberger Jr. once shot 64 from the back tees here as a guest. Well, there’s golf, and there’s tournament golf, and as the great man said they are not at all the same. Plus, Hideki Matsuyama shot a Friday 63 and the fighting was over.

You hope he enjoyed his run with the record. That’s because Thomas shot a Saturday 61, and you’d have to think that that record will be safe for more than a day. A 61 on this par-72 Course No. 3 at the Medinah Country Club? That’s crazy-low.

Through three rounds of FedEx II (aka the BMW Championship), Thomas is 21 under par and he has a 6-shot lead over Tony Finau, his Saturday playing partner, and Patrick Cantlay.

It really doesn’t seem possible. But this is a special player who, when he’s driving it Rory-like, can do everything. Justin Thomas once shot 59 in a Tour event, in Hawaii in 2017. He shot 63 at the 2017 U.S. Open at Erin Hills. This year, he lost three starts because of a wrist injury. There were whole rounds and weeks where he really didn’t look right since coming back. Those worries are now over. 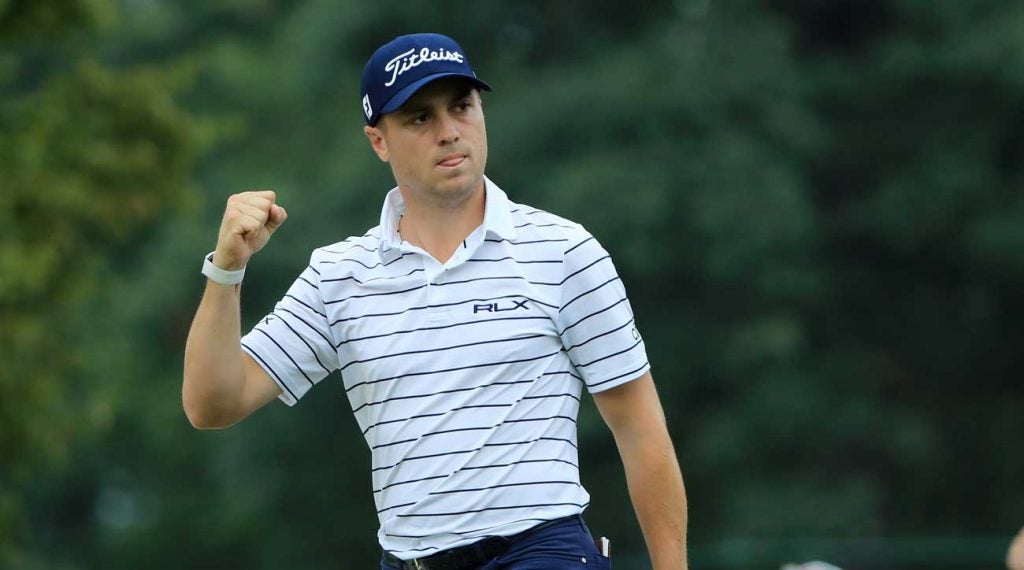 Justin Thomas shot 11 under Saturday WITH A BOGEY.
Getty Images

Thomas is one of Tiger Woods’ favorite young players on Tour. Woods likes Thomas’ manner, humor, intelligence, professionalism — and you can be certain Thomas will be an anchor if not the anchor on Woods’ Presidents Cup team in December.

You can also be sure (far easier to type than do) that Thomas is going to win this event. When a course is playing this soft and wide, protecting a big lead is far less daunting than at, say, Bethpage Black in May.

“If you give us soft greens and soft fairways, we’re going to tear it apart,” Thomas said Saturday night. His magic show began, after a rain delay, with five straight birdies that left soft greens softer yet and wide fairways wider yet. All you had to do was hit it to your number. Said Thomas, “We’re good.” He’s talking about himself and literally dozens of his touring brethren. They’re very good at golf.

Through the round, Thomas looked strikingly calm. His golf-pro father, Mike, and his mother, Jani, and his girlfriend, Jillian Wisniewski, were walking the fairways with him, as per usual. The father’s face was red with excitement by day’s end. If you were the father and teacher of a 26-year-old Tour player, wouldn’t you be red with excitement, too? Yet Justin’s face was largely inexpressive, as per usual. “When he’s going low, his attitude is, `More,’” Mike Thomas said at day’s end. “When he’s going around and shooting one over, that’s much harder on him.”

Justin said the most nervous he felt was on the par-5 10th, standing over an eagle putt. A fan yelled out, “Noonan!” There’s a lot of that, around here. The reference (as every college freshman knows) is to Danny Noonan, stud kid caddie/golfer at Bushwood Country Club, in Caddyshack, the Bill Murray classic. A bucket in a tent here reads “Danny Noonan Tip Jar.” Much of Chicago is like Murray, a native. “I was scared that he was going to say something while I was putting,” Thomas said. He was thinking, “Does this guy hate me?” The yelling thing at Tour events (except the Masters) is way bizarre but nobody hates JT. He doesn’t evoke that kind of emotion. In any event, there was no second Noonan shout-out and the putt dropped for an eagle 3.

When you’ve gone out in 31 and you’ve just started the back with an eagle, it’s time to start thinking about a perfect game.

In the pastime — and Chicago still has two baseball teams, you know — when pitchers are throwing no-nos, they get shunned by their teammates. No eye contact, no chitchat, no nothing. Tony Finau and Justin Thomas didn’t have any silent treatment going on Saturday. They’re talkers, and s0 they talked.

Despite Thomas’ birdie-birdie-birdie-birdie-birdie start, Finau had the honor on the par-5 5th. That’s because he holed out from 190 yards for an eagle on four. (They’re good, indeed!) Elsewhere, there was other TV fun. At day’s end there were four players at 10 under and they were in a tie for 13th.

History note: Sergio Garcia shot 10 under here 20 years ago at the 1999 PGA Championship and finished second, by a shot, to Tiger Woods.

Thomas and Finau, who shot 68, were not giving each other any sort of silent treatment. They both graduated from the Korn Ferry Tour to the PGA Tour in 2014. They were on the Ryder Cup team last year. “We had good mojo,” Finau said. “Hopefully we will on Sunday.”

This is going to be a race to 24 under, 25 under, something like that. Only one guy is going to get there.

Before the tournament began, Thomas thought about what the winning score might be. They all do that, every week. “I feel like every practice round I play, [I say], ‘This will be 12 to 15.’ It doesn’t matter what the course is, how it’s set-up, 12 to 15 [under].”

On Wednesday, that would have seemed like a very aggressive guess.

All together now: Oops.

Michael Bamberger may be reached atMichael_Bamberger@golf.com