Extensive rain at Aronimink has brought a whole host of interesting scenarios into play at the BMW Championship. Will we see a Monday finish? A tournament shortened to 54 holes? One player with his eye likely on the weather is Jordan Spieth, who faces a potential fine or suspension if the tournament should end as it currently stands.

Spieth is projected at No. 31 in the FedEx Cup standings. That would leave him as the odd man out; only 30 players advance to East Lake for the Tour Championship. If the current results should hold, Spieth would be in violation of a new PGA Tour rule.

The rule is designed to bring more star power to the Tour’s lesser events. It mandates that players either add a new tournament to their schedule — an event they haven’t played in four years — or enter a minimum of 25 tournaments throughout the course of the season. Spieth, as noted by ESPN, has played 23 tournaments, and the upcoming Ryder Cup will count as his 24th. Because he did not add a new event this season, he would fall short of the mandatory threshold. 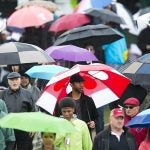 You may also like Soggy Sunday: Play at BMW suspended, tee times pushed back

If Spieth does violate the rule, he would be the first to do so in the two years since its institution. Tour regulations indicate he could be subject to a three-tournament suspension and a “major fine” of at least $20,000. The good news? He could likely afford it. Spieth has earned nearly $2.8 million in PGA Tour events this season.

Here’s a full explanation of the rule.