EVANS, Ga. — A self-described introvert, Jennifer Kupcho is quickly discovering that there’s no place to hide when you’re the No. 1 women’s amateur in the world.

Hours after dining at the main table in the Augusta National clubhouse with Fred Ridley — “Mr. Chairman” as she calls him — and USGA president Diana Murphy, Kupcho was first on the tee at 9 a.m. to hit the opening shot of the inaugural Augusta National Women’s Amateur.

With Mr. Chairman once again standing behind the tee to witness the opening ceremony and historic start to the event he created, Kupcho striped her drive down the center of the 1st fairway at Champions Retreat.

“It was very official,” Kupcho said. “I walked up, everyone was very quiet, like no talking to each other at all. I was like, ‘Oh, my gosh, this is crazy.’ But yeah, it was a great experience to have everyone there. Mr. Chairman was there. It was exciting to get to hit it. I was a little nervous, but somehow it went straight.”

Everything pretty much went straight for Kupcho on Wednesday. On a cool but comfortable sunny morning, her day steadily warmed up with the temperature as she fired a bogey-free 68 capped by an up-and-down birdie on 18. She hit every green and barely missed only a couple fairways and posted her fourth consecutive competitive round without a three-putt.

“I think this is the first time I’ve ever had no bogeys and hit 18 greens together,” said Kupcho, who shares the lead at four under with 16-year-old Zoe Campos. “So probably the first perfect round I’ve played.” 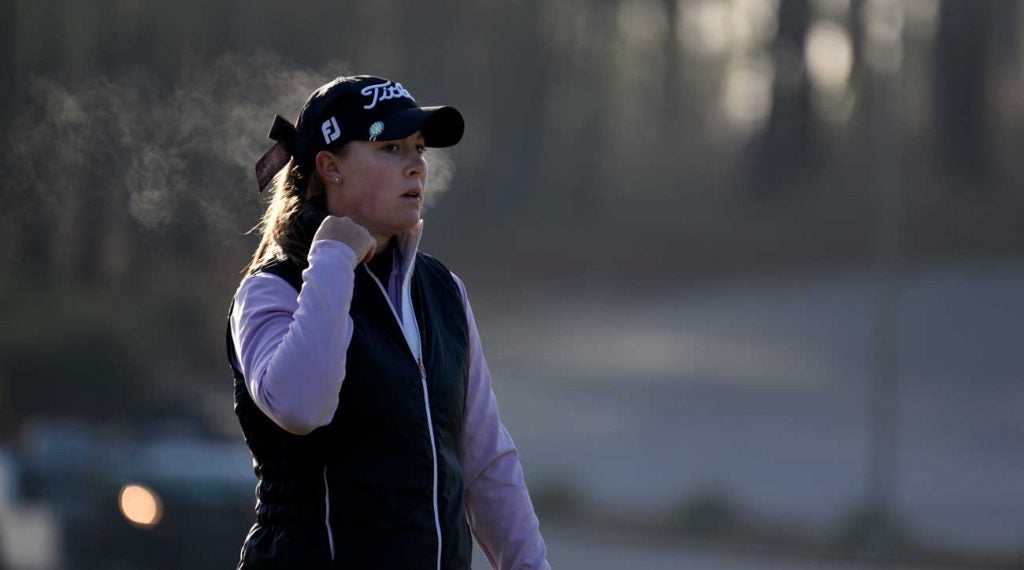 Teeing off last in the field Wednesday, South Africa’s Kaliegh Telfer birdied two of her last three holes to move into solo third place at three-under 69.

Kupcho has largely been the center of attention since she arrived. The reigning NCAA individual champion already has her LPGA tour card locked up when she chooses to turn pro after leading her Wake Forest team back to the NCAAs this summer. Her frontrunner status landed her at the big table after the full 72-player field got to go shopping in the Masters merchandise “mall” and explore the Augusta National clubhouse, including stops in the Champions Locker Room and the Crow’s Nest where amateurs can stay during the Masters.

“It’s a lot of social skills,” Kupcho said of her learning curve this week. “I’m definitely an introvert, so I’m going to have to become more outgoing and just be able to talk to whoever comes up to me and carry on a conversation with them.”

In stark contrast to Kupcho’s heralded magnetism, co-leader Campos is at the far end of the spectrum. The 16-year-old West Ranch High School sophomore from Valencia, Calif., was among the last players to get into the field as one of the top 30 Americans not otherwise qualified. Her six-birdie round led her into an interview room full of sportswriters and TV cameras for the first time.

“Not really … but kind of at the same time,” Campos said. 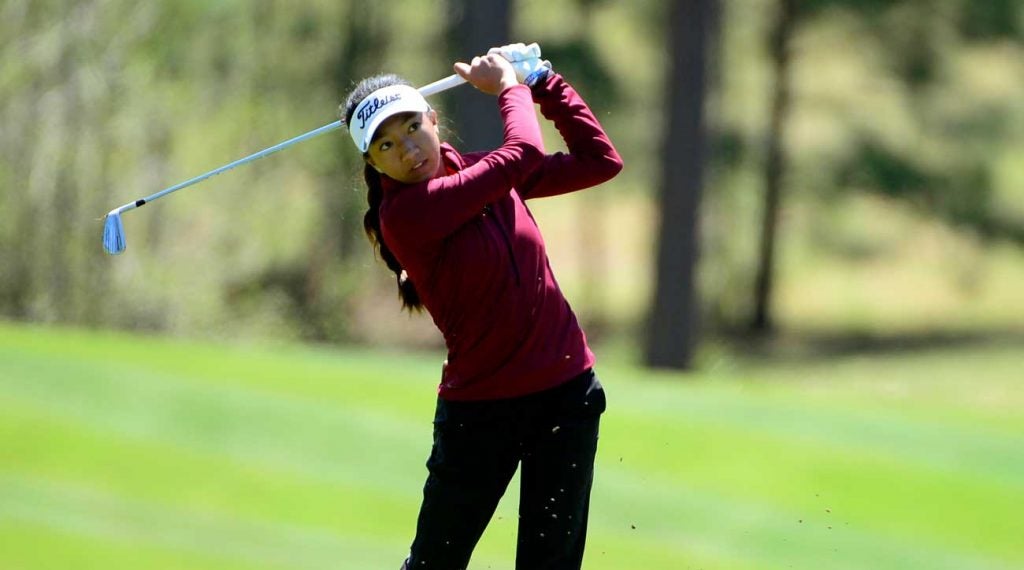 Zoe Campos is one of your 18-hole leaders down in Georgia.
Courtesy of Augusta National

Her relatively late invitation served as a motivator to put in extra hours on the range and take practice more seriously over the last couple of months.

“At first, I didn’t think at all I was going to get in because my ranking was kind of low for this tournament,” Campos said. “But once I got in, like, I knew I needed to play well. And I guess I am now.”

Zoe Campos carded 6 birdies to put her in a tie for the lead at #ANWAgolf pic.twitter.com/ITxKI8RGqL

Campos, who didn’t even know what Augusta National or the Masters were until a few years ago, isn’t weighed down by the same expectations as Kupcho or Mexico’s Maria Fasso, another deferred LPGAer who sits tied for fourth at two under with Spain’s Marta Perez, Italy’s Alessandra Fanali and Sweden’s Maja Stark.

“I don’t really expect myself to be up top,” said Campos, who ranks 103rd in the world. “I’m really just focused on making the cut. It’s not my, like, absolute goal to win this tournament. I just really want to get a good experience out of it.”

Twenty players shot par or better on a Champions Retreat course that played a little shorter and more forgiving than it did in the cold drizzle during Tuesday’s practice round. Even in the relatively calm environment, the stakes Wednesday were palpable.

“I was shaking so bad on the 1st tee,” said Fassi, a senior at Arkansas. “I love that feeling. I think it was worthy of how big this tournament is. We’re part of history, and I think that if I would have not been nervous, I would have been worried.”

The real scramble will begin Thursday when the field will be cut down to the top-30 players who will compete in Saturday’s final round in front of significantly larger galleries at Augusta National. There are 19 players situated within one shot on either side of the top-30 cut line vying to compete on the course they all got a first glimpse of Tuesday evening before dinner. A playoff, if necessary, will whittle down the field to exactly 30 players. Those who don’t make the cut will get the consolation of playing Augusta National during a closed practice round on Friday.

“Seeing Augusta for the first time, it was unbelievable,” Campos said. “Like just seeing how everything is set up, and how everything looks, is just so perfect. Looking at that makes me more motivated to play better, to play at that course, because I think it would be an unbelievable experience to play there.”

For some, it’s already been an unbelievable experience just being here. Kaylee Benton, a classmate of Fassi’s at Arkansas, got into the field last Friday when Lucy Li withdrew because of injury.

Benton — whose older brother, Nicklaus Jordan, is named after two sports icons — shot 78 on Wednesday and sits tied for 51st. But her week was already “on Cloud Nine” Tuesday night before dinner at Augusta National.

“I touched Tiger Woods’ locker,” Benton said. “That made my life.”