In first start of (likely) final act of career, Tiger Woods shows flashes of old self and plenty of rust

LA JOLLA, Calif. — For the first round of the rest of his life, Tiger Woods was paired with Patrick Reed and Charley Hoffman, in a 10:40 tee time on Thursday morning. But as Woods toured Torrey Pines, he was mostly accompanied by old ghosts. Tiger has more history at Torrey than any other championship venue, going back to when he was a teen phenom lording over the Junior Worlds. In a career defined by reinvention, Torrey Pines has always been a constant, the place to measure the ebbs and flows of a career unlike any other.

On Thursday, Woods looked nothing like the wunderkind who 19 years ago went a tournament-record 22-under par, ramping up for a stretch of the most dominant golf ever played. Woods, 42, is now thicker and less supple. His reconstituted swing remains powerful but is no longer an astonishing act of violence. In the mid- to late-aughts, when Tiger won four years in a row at Torrey, the game was almost too easy for him. Thursday’s even-par 72 was an almighty struggle, as Woods often whipsawed drives into the juicy rough, airmailed a couple of greens with a wedge in his hand and never made a putt over four feet, often meekly missing on the low-side, including an itty-bitty par putt on the 13th hole, one of his three bogeys. But he never stopped fighting, and that alone was a victory; it was at Torrey in 2015 that an injury-riddled (and emotionally spent) Tiger withdrew mid-round, famously citing deactivated glutes, though the horror of the chip yips may have been what really chased him from the course. 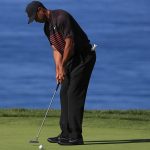 You may also like The good, the bad and the ugly: 9 numbers to know about Tiger’s opening round at the Farmers

One round is not a large enough sample size to know whether Woods is merely rusty or if his skills have eroded appreciably. Afterward, he was unblinking in assessing the shortcomings of his play, but Woods summoned just enough quality shots that there were times during the round when he strolled down the fairway smiling and jauntily twirling his club. The vibes at Torrey Pines are not all ancient history: the last Woods renaissance, in 2013, began with a win here, launching a Player-of-the-Year campaign. That remains one of the tallest mountains he has climbed, rising from the wreckage of his sex scandal to make it back to No. 1 in the World Ranking. (His 74-75 weekend at Torrey in 2011 was a measure of how far he had fallen.) Five years and four back surgeries later, can Woods go back to the future and be anything like the player he once was? One of his playing partners on Thursday, Patrick Reed, believes so.

“There were some things out there that were pretty cool to see, especially with different shots he hit,” Reed said following a 68 of his own. “He hit a high, tight-draw driver and a low, flat cut that just goes miles. Some of those cuts he hit off the tee were insanely long.” Reed was particularly dazzled by a bit of vintage magic: Wood’s tee shot on the 188-yard par-3 16th hole, which he nearly holed. “I thought I hit a good shot in there with a six-iron,” Reed said. “He hit the same club and it came out in a completely different window. Mine came out in a normal window and his was about 30 feet higher than that. It was monstrous up in the air. Into the wind, you wouldn’t think a ball would carry that far and he’s able to penetrate it through the wind at that height and be able to land it that soft.” From the look on his face, Reed had just found religion.

His words captured a little bit of the electricity that surrounded Woods’s first PGA Tour start in exactly a year. Golf fans and pundits had been hyperventilating all week on social media, to the point that on Wednesday night Reed texted Woods, saying, “I expect you to wow me.” The crowd was 20 deep around the 1st tee for Woods’s opening drive. He had looked spry during his practice rounds, and the day before the only shots he misplayed were to the right, a manageable one-way miss. But there is golf and there is tournament golf and they are not at all the same; on his first swing on Thursday, Woods uncorked a violent hook that led to a buzzkill bogey. On the 2nd hole he split the tight fairway with a 3-wood but then jacked his wedge over the green. He saved par with a delicate chip, and maybe the best sign from the first round was that Tiger displayed no traces of the chip-yips. The scratchy start continued with another bogey on the 5th hole, where Woods went bunker to bunker after another drive lost to the left. He built some momentum in the middle of the round, beginning on the par-5 6th, which he reached in two with a towering long-iron from 249 yards following a perfect drive. Woods thought he had jarred his 52-foot eagle putt, even offering a premature putter-raise, but the ensuing tap-in was the first birdie in this, the final act of his career. He made another birdie on the par-4 10th hole, spinning a wedge from 133 yards to within inches of the cup. The sloppy bogey on the 13th hole was redeemed by the birdie on 16. For the round he hit 12 greens in regulation and 8 of 14 fairways. The 72 on Torrey’s South Course left him idling in 84th place, seven shots back of leader Tony Finau, who played the more user-friendly North.

On Friday, Woods will step to the North Course, fighting to make the cut. In the old days, earning a weekend tee time was a foregone conclusion for Woods, but this comeback needs to be measured in incremental improvement and small victories. Last year, Woods missed the cut at Torrey for the first time ever, and then he was gone, lost to the surgeon’s knife. The spinal-fusion surgery was a kind of Hail Mary to prolong his career. Of course this latest comeback begins at Torrey Pines, the scene of his most mythologized victory, when he won the 2008 U.S. Open on a broken leg. Woods has been to hell and back in the decade that followed. On Thursday, he didn’t look great, but he did look healthy and, despite some middling golf, pretty darn happy. For now, that’s enough.