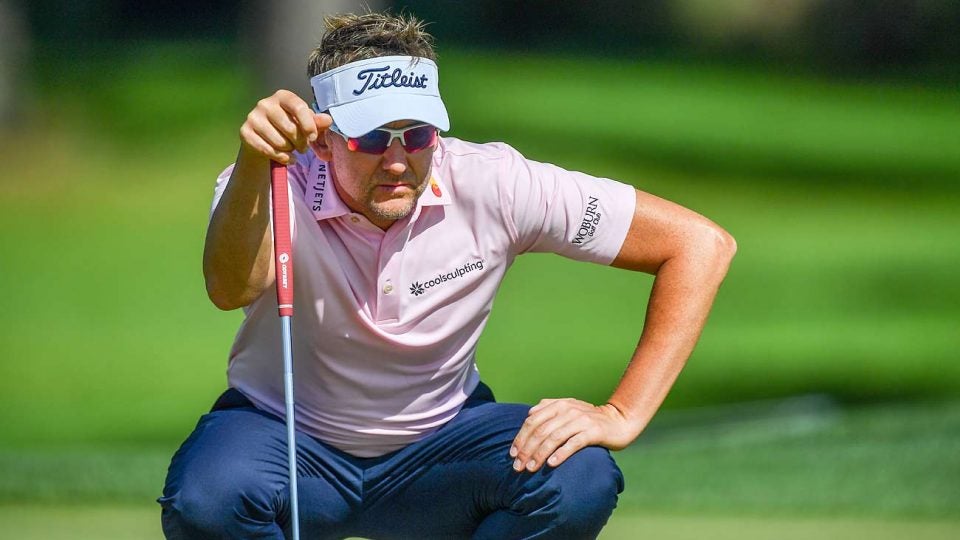 HUMBLE, Texas (AP) — Ian Poulter has played in the Masters a dozen times, never missing the cut. Beau Hossler has never played a competitive round at Augusta National.

Both are in position to become the last man in the Masters field, and neither wants to think about it.

Like all PGA Tour events that offer full FedEx Cup points, the Houston Open title comes with an invitation to next week’s Masters.

“No, not thinking about it, not talking about it,” Poulter said. “I’m going to go out and have some fun tomorrow. There’s a lot of ifs and buts. I’ll have no emotion at all. I’m in a no-lose situation. … I’ll go do my job.”

Four players were two shots behind Poulter and Hossler — Australian Greg Chalmers (65), Argentina’s Emiliano Grillo (67), American Kevin Tway (69) and Paul Dunne of Ireland (69) — and none of them has a spot at Augusta yet either.

Hossler has popped up on a major leaderboard before — he briefly led the 2012 U.S. Open while still in high school — and he said getting to the Masters would be “as good as it gets.” But he said contemplating that opportunity would only lead to “trouble” on Sunday.

Poulter shot 64 on Friday after opening with a 73 that had him packing his bags in anticipation of a missed cut. It was the first time since his last victory in 2012 that he had consecutive rounds of 65 or better on the PGA Tour.

Asked if his rounds ranked among the best back-to-back efforts in his 23 years of touring professionally, Poulter said, “From a putting standpoint, yes, absolutely.”

It was a simple fix for the English veteran renowned for making crucial putts on winning Ryder Cup teams. He opened his shoulders slightly, allowing him to see the lines better, and has played his last 40 holes in 16 under, without a bogey.

“Hopefully I’ve found the key,” Poulter said. “I need to write it down and, when it’s not there, I need to read it.”

Poulter nearly made it into the Masters last week with a run to the quarterfinals at the Dell Technologies Match Play, which improved his world ranking to 51st — just missing the cutoff to move into the top 50. Making matters worse, he had been told by media members that his quarterfinals appearance would guarantee him enough ranking points. But just before he began his quarterfinal match, officials informed him that he’d need to make the semis.

The news knocked Poulter off his game and he lost badly, 8 and 6, to Kevin Kisner.

“Some people were getting in my head space, which is never good,” Poulter said. “Yeah, maybe I was a bit angry on Thursday. Maybe I was kind of forcing, trying to force my way into (the Masters). That didn’t work, so I had to re-think it. I kind of had to flow the cobwebs out, reset and go again.”

Rickie Fowler birdied three of the first four holes to move into the lead before he faltered with a double bogey on the sixth hole and a triple bogey — including a three-putt from inside 7 feet — on the par-5 13th. He shot 73 and was five shots back.

Jordan Spieth, whose putter appeared to be heating up after a season-long slump, had four three-putts in the first eight holes — including two misses from inside 4 feet — and shot 71. He trailed by four shots.

Henrik Stenson and Matt Kuchar were 11 under, among the dozen players within three shots of the lead.

Ninety players teed off Saturday, the most in almost three years on the PGA Tour, after Bobby Gates’ final-hole bogey on Friday allowed an additional 20 players to make the cut. Seventy-five remain after Saturday’s secondary cut, including Phil Mickelson, who had a double bogey and a triple bogey in his round of 72.

Now that he’s out of the hunt, Mickelson will spend Sunday trying to gear up his game for Augusta. Hossler, Poulter and many others can only hope for the chance to do the same.