Phil is still in control, and everything else you missed from Round 2 of the Desert Classic

After an incredible opening round in La Quinta on Thursday, Phil Mickelson’s red-hot play cooled considerably on Friday (at least relatively speaking). Despite adding eight shots to the score he shot yesterday, he still managed to retain his place atop the leaderboard.
Here’s everything you missed from Round 2 of the Desert Classic.

1. Phil Mickelson has a two-shot lead

It’s hard to top the lowest round of your PGA Tour career, but Mickelson had a respectable showing on Friday, posting a score of four-under 68 to get to 16 under overall — two shots clear of his closest competitor, Curtis Luck, at -14.
After a slow start, Mickelson really into a groove on his back nine, carding four birdies in his final five holes.

The 48-year-old Tour veteran is seeking his 44th career victory this week. 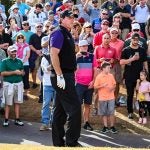 You may also like Not again! Phil Mickelson becomes latest player to almost violate the new drop rule

2. Carlos Ortiz made nine birdies — and an eagle!

Carlos Ortiz, a 27-year-old Mexican pro, turned in the round of the day on Friday with a scintillating front-nine 28 (!), followed by a back-nine 34, for a grand total of ten-under-par 62.
The red-number barrage launched Ortiz 103 spots up the leaderboard to T11. Ortiz is still seeking his first Tour victory, but he got in the mix at last year’s Sanderson Farms Championship, where he finished T3.

3. A longtime Tour journeyman is in the mix

Thirty-eight-year-old Steve Marino is currently ranked 709th in the world — but you certainly wouldn’t know it from his scorecards over the past two days. Rounds of 66-65 have placed him firmly in the mix where he’s currently near the top of the leaderboard, three shots behind Mickelson’s lead.
This week is Marino’s 222nd start on the PGA Tour, and though he’s finished runner-up five times, he’s still seeking his first career win.

Steve Marino is T3 at the @Desert_Classic.