A brand new tournament is off and running this week: the Rocket Mortgage Classic, which is being played at Detroit Golf Club in Michigan.

Dustin Johnson and Rickie Fowler headline the field, where the scores have been ultra-low in the first round. Here’s everything you missed from the opening-round action on Thursday.

Nate Lashley lit it up

Thirty-six year-old Nate Lashley is in only his second PGA Tour season, but he made a serious statement in the first round. His perfect scorecard included nine birdies and no bogeys, a nine-under-par 63. Despite the incredible performance, he leads Ryan Armour and Nick Watney by only a single shot.

⛳️ @NateLashley got in the field @RocketClassic as an alternate on Wednesday.

Lashley’s best finish this season is T-8 at the Puerto Rico Open. Though he has yet to win on the PGA Tour, Lashley’s resume includes three wins on the PGA Tour Latinoamerica in 2016, and one Korn Ferry Tour victory in 2017. 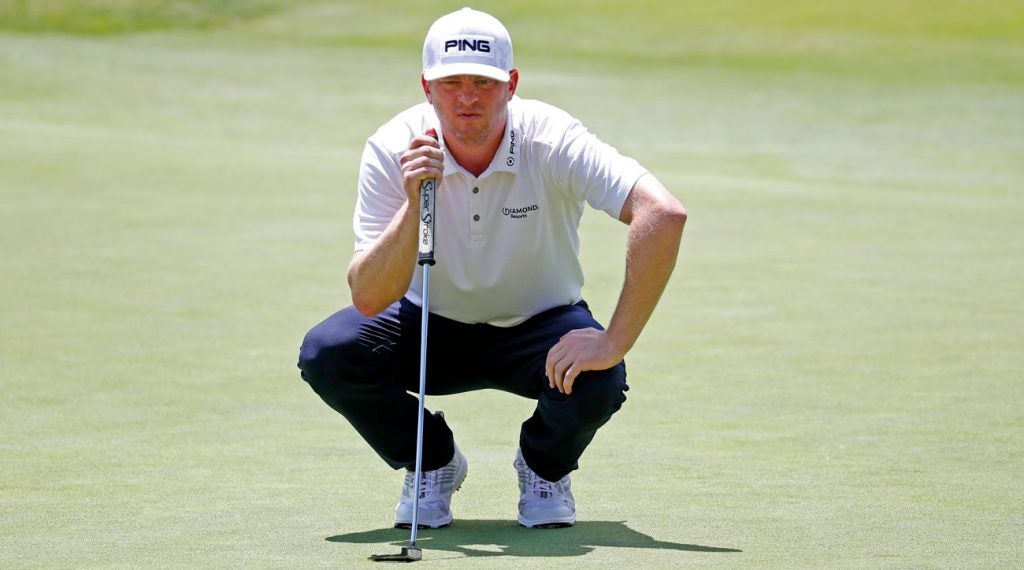 Fowler carded three birdies, an eagle and a bogey en route to a first round of 68 (4 under).

Johnson’s up-and-down day was highlighted by six birdies, but his round was derailed by two double bogeys: one on No. 5, and another on No. 11 — both are par 3s.

DJ finished with a one-under 71.

? @DJohnsonPGA‘s chip-in sends the crowd into a frenzy on 17. #QuickHits pic.twitter.com/Is9WyuzjkZ

Tournaments
Dustin Johnson surprises couple at Rocket Mortgage Classic with gender reveal
How about the other big names?

Bubba Watson and Patrick Reed are both five shots back after rounds of 4 under.

Amateur phenoms turned pros Viktor Hovland and Matthew Wolff are 2 under and 3 over, respectively, and U.S. Open champ Gary Woodland finished at 1 over (73).

Driving
Viktor Hovland shows off eye-catching two-step backswing during first pro event
Anything else of note?

Last week’s winner Chez Reavie kept his positive momentum going with an opening round of seven-under-par 65.

Chez Reavie hasn’t missed a step, carding a 7-under 65 in Round 1.#LiveUnderPar pic.twitter.com/GzQlqJ4N3f

And after a rough patch that started at February’s Genesis Open, Cameron Champ posted a low number on Thursday: a six-under-par 66 that included eight birdies and two bogeys.

Also, Thursday’s scores were low, and I mean low. There are 121 players under par through Round 1! Wonder what’s in store for Round 2 …