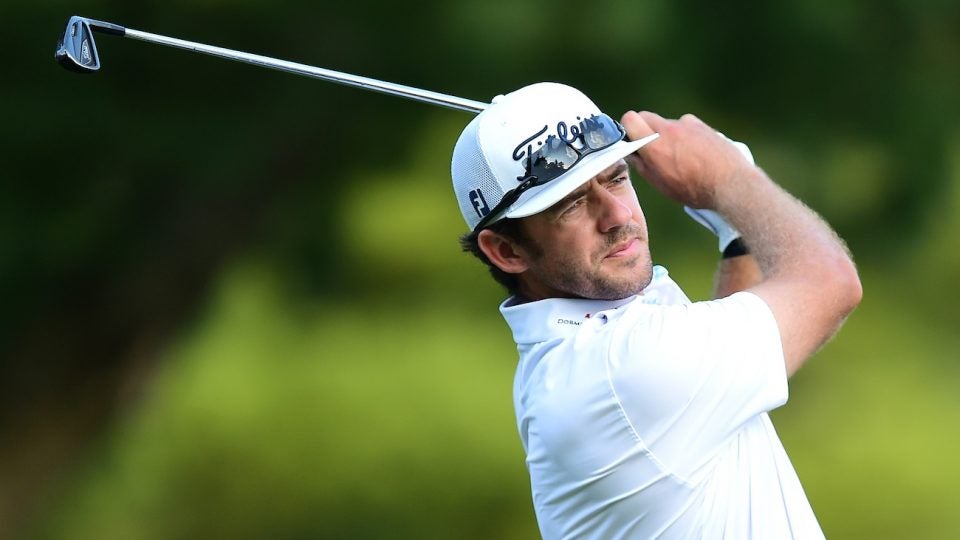 Fresh off his maiden PGA Tour victory at the Houston Open, Lanto Griffin spoke to GOLF’s Jonathan Wall about the Titleist gear (and Sik Flo mallet) he’s currently using at the moment. The conversation ranged from his success with new Titleist irons in the bag to why his friend shouldn’t expect to get his putter back anytime soon.

You’ve spent time on the Korn Ferry Tour and PGA Tour. Can you describe how different the equipment landscapes are in it? Is there more of a temptation to tinker on the PGA Tour?

Lanto Griffin: Yes and no. In my opinion, the Titleist guys, every time we get to a tournament, there’s four to six guys there that are willing to get on TrackMan, tinker if we need to. With Titleist, they don’t bring out drivers and new clubs every three months, like some companies do. So, for the most part, it’s making small changes.

The only difference on PGA Tour practice round days, there’s a lot more grip companies, shaft companies — they try and push new grips and this and that on you. And it was a little bit of a learning curve, just learning to say no. A lot of times in the first year on Tour, I’d have somebody come up and want me to try their grip and I’d be like, “Yeah, I’ll try it.” But I’m at the point now where I’m pretty good at saying no to stuff like that. The equipment I have right now is dialed in for me and I have no plans on changing anything.

What was the process like for you changing to Titleist’s T100 irons?

Griffin: Basically looking down at an iron or club that gives you the confidence to begin with. So that’s the first thing I look at, if I like looking down at it, I’m going to try it. So they brought out the T100 in Omaha on the Korn Ferry Tour. I want to say it was a Tuesday and I was going to go out and play nine holes, and so a couple of the Titleist guys were there, they brought the irons out and I hit, and this was true: I hit four balls with it and I was like, “Alright, they’re going in.” Four golf balls, they all felt good, and I went out and played with them, and I haven’t thought about it since.

I assume that’s the fastest equipment conversion in your career?

Griffin: Pretty much. But it’s funny, two years before when the new AP2 came out, I switched them the week prior to Nashville and then went on to win that week. Very seldom do I switch clubs or irons, but when they come out with something, they change little things. They don’t make drastic changes.

Any particular reason why you use the black version of T100?

Griffin: When I saw the launch of the T100, they looked awesome. I remember looking on Instagram and saw Cameron Smith — he had a set of black ones. So I reached out to the guys at Titleist and, and I asked them, “Am I eligible for those?” And they said, “Right now we’re very early in with the black iron and they’re only available to PGA Tour players.” I worked on them enough to where a dude I know at Titleist, he talked to the right person and he got me a set of them. Immediately they were in the play. Looking down at the black irons, it just fits my eye. My iron play has been great the last five, six weeks with them.

You have mostly new Titleist gear in the bag, but I noticed you still had a 917 D2 driver. Any particular reason why you’ve stuck with it?

Griffin: Driving the ball has always been a struggle for me. I’ve always been a long hitter, but I’ve always had a double miss. So right before they launched it TS2, I finally got tired of hitting a double miss, so I went to a cut, and I started charting my driver pretty much religiously. I got really comfortable with a cut with the 917 and then when they bring out the TS2, it was really tough because looking down the TS2, has a really cool look, the black head, it felt great. But I was driving it so well for the first time in my career, I didn’t want to make the switch.

I’m one of those players that if it’s not broke, don’t fix it. But I am curious about TS2. Maybe it fits me better, but I’m a little hesitant to try it because I’m driving it the best I have in my career. So it’ll stick with it for a while. I’m sure at some point I’ll give the TS2 a chance and it’ll probably just as good or better for me.

When did you start stamping your Vokey wedges with Talladega Nights quotes? And do the quotes ever change?

Griffin: My relationship with the Titleist guys is pretty special, they’re like family to me. Jim Olsen gave me a shot in 2008 when he brought me on staff, started giving me equipment for free when I was in college. Jimbo and I talk all the time. He came out on the range during the Korn Ferry Tour Finals at Victoria National and watched me hit balls and I was like, “What are you doing?” He said, “I’m doing my work.”I think it was four o’clock on Tuesday, and I said, “Well, do you want to take my wedges and go stamp something on them?” And he goes, “Yeah, what do you want?” I was like, “Your call buddy.” So he came back about an hour later — and we’re huge with movie quotes and always kind of joking around — and threw those four quotes on them. Every time I look down they’re hysterical.

AMAZING week for friend and brand ambassador Lanto Griffin. A few weeks ago Lanto said he was feeling great and in a good place, to see him win this week is a testament to his hard work and determination. Very proud to have him on the team. @titleist @vokeywedges @lantogriffin

I already got four new ones for the next set of wedges; they’re going to be Dumb and Dumber. When they come out, probably before the start of the year, I’ll probably change wedges, get some fresh grooves and we’ll have a new look for the stamps.

Any reason why you prefer a Vokey pitching wedge to a standard T100 version?

I think my gaps are a little bit better too. If I had a pitching wedge with a T100 I might hit it two to three yards further, which would increase that gap between my gap [wedge] and pitching wedge. So I’m comfortable hitting a three-quarter 9-iron and stuff like that. The gap between my 9-iron and wedge isn’t as important to me, but getting inside 155 yards, having a Vokey wedge in my hand I feel like I’m going flag hunting and then I got a good chance to make birdie.

When it comes to testing gear, how much are you weighing the launch monitor numbers versus what you’re seeing and feeling?

Griffin: The number one thing for me is feel and ball flight. If you sat there and watch guys like Jim Furyk, Daniel Berger, some unique golf swings, which I would almost put myself in that category a little bit. If you look at ball flights, that tells you more about a player than any number can possibly tell you. For example, I don’t really like to know a whole lot about what’s going with my shaft. I don’t really care cause I trust [the Titleist reps], they know how to fit me. If they tell them to try something, I’m going to try it. And then if it feels good and ball flight looks good, almost 99 percent of the time the numbers are going to be good too. So I rely a lot on the Titleist guys when making changes. Their opinions matter a ton to me.

Obviously, at the end of the day, it’s my decision what I want to play it. But I don’t think they’ve ever told me, “Hey, this shaft is perfect for you.”, the numbers are great and I didn’t like the ball flight, so it’s a team effort. The less I know about my equipment, the better. Cause I don’t want to switch, I don’t want to tinker with a new driver shaft when things are working for me.

How much time do you spend inside the equipment truck each week?

Griffin: I go in there mainly to take a break from the range and hang out with the guys. I’ll go in there every once in a while, check lies and lofts and make sure the gaps are the right. I’ll go in there once in a while if I need new wedges and talk to the guys. But usually, it’s just going in and catching up and trying to get a little bit of a break. We’re all friends. It kind of feels like you’re at home when the guys are there.

What’s the story with the Sik Flo mallet in your bag? That’s a putter you don’t see very often on Tour.

Griffin: When I turned pro in 2010, the first winter of playing mini-tours in Florida, and the Sik guys had just launched their putter line. I bought a couple of putters from them that I used for a couple of years. I felt really comfortable with them. I also putted great in 2017 on the Korn Ferry Tour with a Scotty Cameron 2.6 center shaft putter. Those are the only two putters I’ve used since I turned pro: Sik and Scotty Cameron.

Earlier this year I was really struggling with my ArmLock style, and my best friend came down for a Masters trip we do every year, and I missed every putt with my ArmLock and grabbed the Sik Flo putter out of his bag, which was actually the putter I got him fit for. So I was familiar with it. I had three or four of the same model back home, but they had different necks, different lies, different grips, and for whatever reason his clicked. And I asked him if he’d let me borrow to see if it worked. I won the first week with it. Long story short, he’s not getting it back.