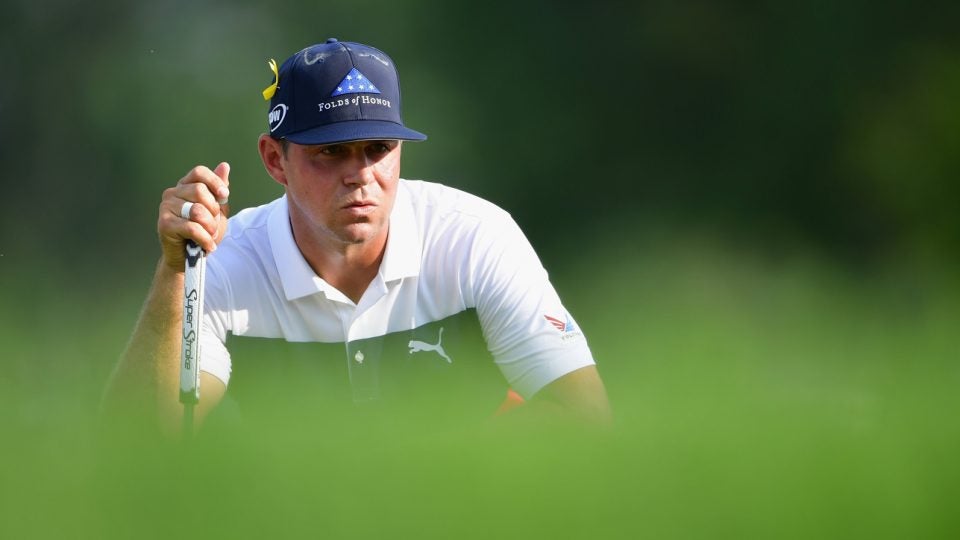 Gary Woodland made 152 feet of putts Thursday during the first round of the PGA Championship.
Getty Images

ST. LOUIS — Here at the PGA Championship, Gary Woodland is a usual suspect. He’s the guy currently out in front who could win the event, but not many expect it. Someone has to lead after 18 holes. Sometimes it’s a champion, other times it’s just another competitor. Which one is Woodland?

He’s won on the PGA Tour before, but has never contended in a major. That frustrates him. His best major finish is T12, at this event in 2011. Sometimes that frustration boils up, makes him stress, makes him press, and can be his undoing during competition. That’s what happened early Thursday, leading to an opening, often debilitating, always maddening bogey.

“It’s not the first time I’ve done that,” Woodland said. “But I just took a step back on 3 and realized I’ve been hitting it so good. Just take a second, take a deep breath and let’s go.”

What followed that bogey was cool, controlled golf, as he tends to do when he’s at his best. Woodland said he struck it “beautifully.” With more than 100 family and friends following him outside the ropes, the vibe was inspirational. He played the final 11 holes in 7 under, posted the best score of the day (64) and now holds an overnight lead at a major for the first time in his career. All of that just a few hours from where he grew up.

“This week is as close to home as I’ve been [on Tour],” Woodland said. “I snuck over here about a month ago and played and saw the golf course. Really enjoyed the layout.”

Between that layout, the Zoysia grass he grew up playing on, and the many Woodland supporters — many of which made him chuckle with jokes throughout the round — it may be enough to make him a champion instead of just another competitor. But the biggest thing working for him Thursday was a hot putter.

Gary Woodland sinks his 6th birdie and now shares the lead with Rickie Fowler at 6-under.

Simply put, it was just about better than it’s ever been. The 34-year-old entered the tournament ranked 99th in Strokes Gained: Putting, but quietly he’s been making some moves. On Saturday of the British Open, Woodland met with putting coach Phil Kenyon (at the behest of his agent Mark Steinberg). The two spent some time discussing Woodland’s balky stroke, and they met again at the WGC-Bridgestone Invitational last week. Then, on Tuesday, Woodland adopted a piece of Kenyon’s advice.

“I was trying to fight it the last couple weeks and trying to feel it,” Woodland said. “We put the SuperStroke grip on on Tuesday and Phil said, ‘Don’t change anything.’ I didn’t have to think anymore, I literally grab the putter and go. And it helps me release the club different. I’ve been releasing with my hands and this helps me release it more down the line, which has been huge.”

Huge — or rather, HUGE — to the tune of 152 feet of putts made Thursday. Woodland canned birdie putts of 44, 23 and 22 feet on his back nine while passing early pace-setter Rickie Fowler. Toss in a 16-footer and a 14-footer and, yes, he made a lot of substantial putts Thursday afternoon. To no surprise, he’s now first in the field in Strokes Gained: Putting.

It was an upside-down kind of day for him: he missed three fairways with his his 2-iron, which he considers the best club in his bag. But so far, something new and unexpected is working perfectly. As he knows, we’re still a long way from Sunday night.