Spelunking on the PGA Tour: A journey deep inside Mayakoba’s ‘cave bunker’ 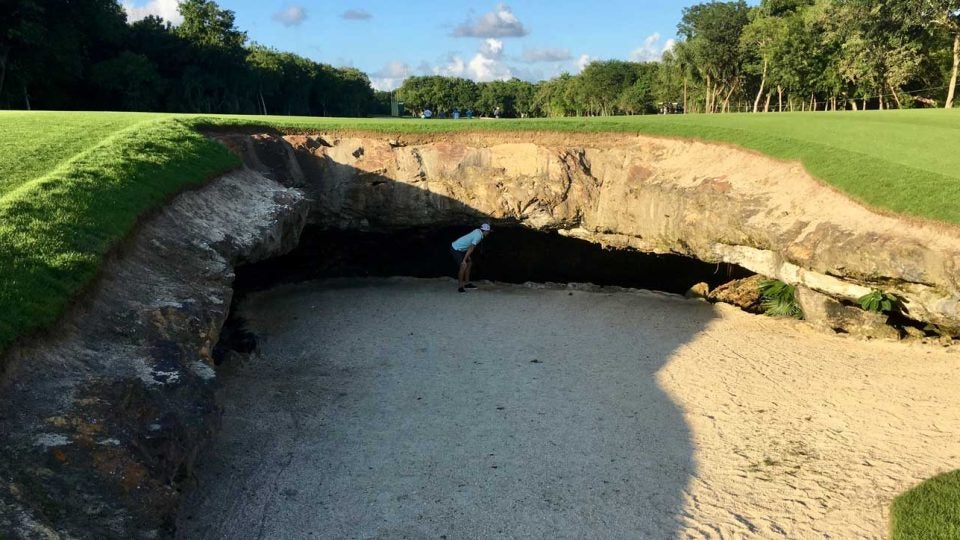 SOLIDARIDAD, Mexico — If we knew it was nicknamed the “Devil’s Mouth,” we might not have climbed into the fairway cave at El Camaleon, site of this week’s Mayakoba Golf Classic. But there we were Wednesday evening, spelunking on the PGA Tour.

How did we — myself and colleague Dylan Dethier — get here? Simply put, there are few places in the golf world that have gone unexplored. The newest track? It’s somewhere on Instagram. The bastion of exclusivity? It’s been droned. But the depths of a cave beneath a fairway in Mexico? Few have ventured there. There’s some sex appeal to it, or at least some sand appeal.

The cave bunker, as it is commonly known, is a cenote, which Merriam-Webster defines as a deep sinkhole in limestone with a pool at the bottom found especially in Yucatán. Check, check, and check. As Matt Kuchar’s pro-am group played toward the green, Dethier and I ventured into the abyss.

Viewable from the fairway is the sandy entryway. We’ll call that the teeth of the Devil’s Mouth. Just beyond the fangs is a drop-off of a few feet onto jagged limestone, and beyond that a pool, which collects drops of water from stalactites above. Bats whizzed by us. When I snapped a picture, I was pleased to not see any reflective eyes staring back. Ten minutes and one failed podcast taping later, the setting sun at Mayakoba drew out many, many more bats. Time to go.

Best we can tell one of the only other people who has been this deep into the cavern is the course’s designer, Greg Norman. Back in ’07, Norman geeked out over the bat-droppings and raved about the pit, calling it an “opening statement.” That’s because the 7th hole at the Mayakoba Golf Classic is actually the 1st hole during non-tournament weeks. That’s right — pipe your first shot of the day down the center and you might be playing from the devil’s tastebuds.

Course architecture snobs might scoff at the bunker’s location. What a gimmick! For my money, gimmicky holes are okay; gimmicky courses are not. The silliness factor was surely a concern when the event first visited El Camaleon. In ’07, back when the event was merely an opposite field tournament to the WGC-Match Play, the cenote was a red-staked hazard. This week, kinda, kinda not. Tour pro Keith Mitchell insisted we didn’t call it a hazard, but if your ball ends up there, there are no easy ways out. You’re either hitting out to lay up, or you’re taking an unplayable lie. That’ll leave you some 255 yards in to what is now effectively a beastly par 3. Good luck with that.

The Devil’s Mouth encompasses about 600 square feet of fairway, some 320-330 yards from the tee box. In other words, smack in the landing zone for Tour bombers. (Take that, technology!) The group of Martin Laird, Seamus Power and Alex Prugh all ripped driver on Thursday, flirting with the Devil’s lips. So did Jordan Spieth, Pat Perez and Patton Kizzire.

Then mighty Cam Champ rolled up.

Um, three-wood everyday for you, Cam. He smoked his shot about 310 yards up to the Devil’s chinstrap of rough, his ball coming to rest just a pace or two from Mitchell’s Wednesday-evening divot.

It was just 20 hours earlier that Mitchell and his caddie contemplated if they had come too close to the Devil’s Mouth. “If I catch this skinny, it’s gonna come back at us,” Mitchell had said. That’s the thing about the cenote: the closer you get, the more imposing it becomes. Mitchell fanned his approach high and some 50 yards right of the green. “I just got scared of it,” he said. “Tried to hit it high.”

An hour later, two amateurs were not so fortunate, banging their second shots into the rocky pit. They briefly considered trying to reclaim their balls but decided against getting their hands (and feet) dirty. Too bad — they missed out on one of the coolest adventures in golf.