Expert picks: Who will win the Presidents Cup and who will be the winning team’s MVP?

The 12th playing of the Presidents Cup begins Thursday at Liberty National Golf Club in Jersey City, N.J., as the International squad looks to win for just the first time in the event’s history. The U.S. leads the all-time series 9-1-1. The Americans are the favorites once again, but the matches aren’t played on paper, so we asked our panel. Who will win the Presidents Cup? And who will be the winning team’s MVP?

Alan Shipnuck: The Americans are going to win in a landslide. They’re simply too deep, too talented and too cohesive coming off last year’s Ryder Cup triumph. And there are enough rookies — JT! — to raise the energy level and keep teammates engaged.

Jeff Ritter: The smart money is on the U.S. So is the stupid money, the retirement money, the mad money and the lunch money. The U.S has won nine of 11, and I’m not sure it’s ever entered a stronger team than this one. The rookies will carry them to another comfortable victory, with first-timers JT and Kisner playing starring roles.

Josh Sens: With American players running roughshod in the FedEx Cup Playoffs and so many young guns on the roster in fine form, the U.S. is the obvious pick. But I’m not just trying to be contrarian when I say the Internationals will win this one. They’ve been walking softly in the run-up to the event, but they’ve got plenty of firepower themselves. In the anything-can-happen atmosphere of match play, look for Marc Leishman as your MVP and, after all these years, for Adam Scott to finally get a Prez Cup win. Or not. 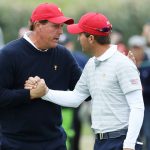 Sean Zak: The Americans will win, as expected, but they won’t pull away until late Sunday. They’re just too deep and the singles matches should expose the Internationals’ collective lack of good form. I say 18-12, with the best player in the world (at this precise moment) as the clear MVP: Justin Thomas.

Dylan Dethier: I’ll take the Americans in a squeaker. There are no guarantees in match play, and I like the way some of the International team — Emiliano Grillo and Branden Grace, in particular — match up with their American counterparts. But the tight-knit, top-heavy American squad is too hard to take down. Now that he finally got a win in last year’s Ryder Cup, Rickie’s my pick for MVP for the American squad, and they’ll take the Cup 16-14.

Jessica Marksbury: The U.S. has got this all the way. History on their side (with only one loss to the Internationals since 1994), and they’re playing at home this year—in the shadow of the Statue of Liberty, of all places! Not to mention the fact that the team is looking pretty bulletproof. DJ, Jordan, Justin, Rickie, the list goes on and on. Remember when Justin Thomas said he’d rather win the Ryder Cup than a major? Team play brings out the best in these fiery young competitors, and I fully expect JT to continue his dominant ways and cap and incredible season with an MVP performance this week.

Josh Berhow: The U.S. will win and Presidents Cup rookie Daniel Berger will assert himself as the next big-time Ryder/Presidents Cupper for the Americans.