In defense of J.B. Holmes: Why the PGA Tour’s slow play problem has nothing to do with one guy

Two days after golf’s tastemakers — in the broadcast booth, on social media, and in the media-media — collectively excoriated J.B. Holmes for grinding the Genesis Open’s final nine holes to a near-halt, I submit to you this simple idea: It is not his responsibility to play fast. He has little incentive to do so. Golf’s rulers have made it that way. And if they don’t like it, they’ll have to make a radical change — and they’ll have to do it themselves.

It’s important to note that in contrast to Bubba Watson, who joined the Tour the same year, Holmes never sought nor achieved the sort of cult-hero status that could easily have accompanied a brawny, long-bombing country kid from small-town Kentucky who’d made his high school team in third grade (yeah, seriously). Instead, despite winning in just his fourth start on Tour and going on to earn two U.S. Ryder Cup appearances, he has kept a relatively low profile. He has never begged for fans. He doesn’t do much on Twitter, save for the occasional sponsor plug or airline complaint. He hardly does commercials and has no Instagram account. He’s in the minority of Tour players who has eschewed The Scene in Jupiter for Bradenton, which is essentially the Midwest of Florida.

Why is this important? Because from his perspective, Holmes doesn’t owe golf fans much of anything. Inherently, being an entertaining figure isn’t a huge responsibility for him. His job is to shoot the lowest score while playing within the boundaries of the rules. And the rules, at least as they’ve been enforced, allow him nearly as long as he wants to play a shot. Right or wrong, that is the PGA Tour Holmes has grown to know and adapt to for the last 13 years, and unless he’s told he needs to, it’s unlikely he’ll change.

By continuing to play slow, in primetime, in contention, Holmes and players like him have put the onus back on golf’s governing bodies to enforce the rules already on the books. It’s not like he snuck up on them with this latest bout of pokishness — last year, you’ll recall Holmes held up the Grammys (the freakin’ Grammys!) when he took four minutes 10 seconds just to lay up at Torrey Pines. Not only was the issue not addressed, the PGA Tour commissioner defended him afterward, and it’s clear they’ve kept Holmes blissfully unaware of the havoc he’s wrought on CBS’s final-round broadcasts.

“I was never even close to being on the clock all week,” Holmes said this past Sunday. “I mean, yeah, when I first got out here I was really slow, but I’ve sped up quite a bit.” That doesn’t sound like a man who’s been told to get his act together. And bear in mind the results of GOLF’s Anonymous Tour Pro survey, two questions in particular:

HAS HAVING A SLOW-PLAYING PARTNER EVER HURT YOUR ON-COURSE PERFORMANCE?

“A bunch of millionaires aren’t going to speed up by fining them 10K.”

Clearly, there’s an accountability problem here, and singling out Holmes does a further disservice of making it seem like he’s the only one. The culture of slow play is well-ingrained throughout golf’s professional ranks. Justin Thomas, who played alongside Holmes on Sunday, wasn’t setting any land speed records (and through it all, their group didn’t fall particularly behind, suggesting sloth-like pace throughout). Bryson DeChambeau is among those unmoved by any potential threat of penalty. “I mean, shoot, we’re almost put on the clock every week,” he said in January. He’s right to be comfy — the Tour has penalized just two players in 24 years. 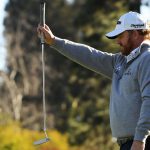 You may also like What exactly is the PGA Tour’s Pace of Play policy? Here are the basics

There’s some movement afoot, of course, for faster play. Fans on social media and several members of CBS’s broadcast team were in open rebellion on Sunday. Even several Tour players have spoken out. Colt Knost called it “a huge deal.” Zac Blair was blunt in his suggestion: “Stroke penalties > fines.” Before the Genesis, Adam Scott offered to fall on the sword if it meant action. “Make me the victim,” he said. “I’ll take the penalty.” The collective exasperation felt like a grassroots movement, perhaps with enough momentum to effect change.

But on Sunday, at the end of a marathon 33.5-hole grind alongside Holmes and Thomas, Scott’s tone had grown more defeatist. “I’ll tell you, my thing on slow play is it’s never going to change,” he said. “I think it’s just — get over it. Until television and sponsors say no more money, slow play ain’t going to change.”

Golf’s conclusions are, in part, exciting because they’re slow. Tournament play crescendos to a big finish; suspense builds in the in-between moments. But the game is at no risk of losing that dramatic tension. What’s at risk is losing viewers before they get there. And pinning that all on J.B. isn’t going to help.