After six years tinged with self-doubt, local favorite Charles Howell III is back in the Masters 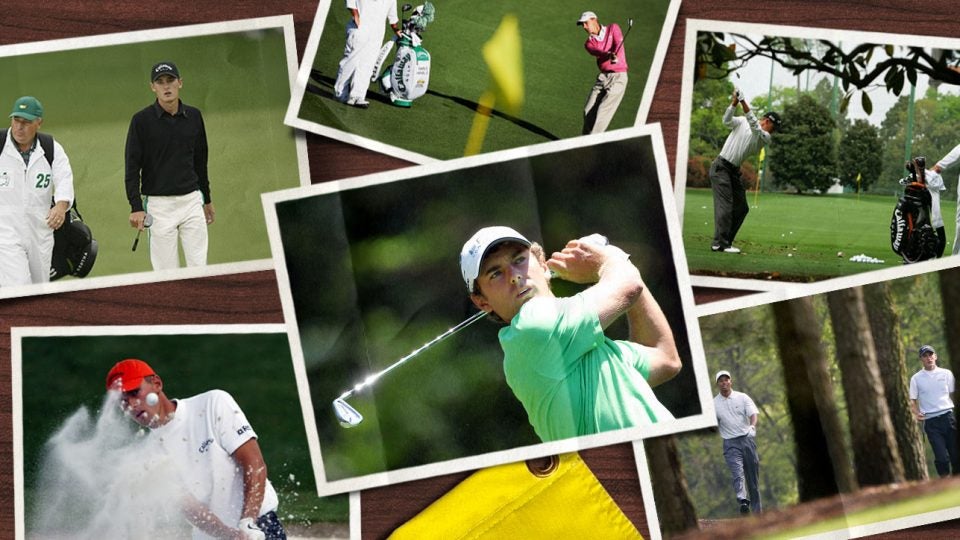 Charles Howell III is finally back in the Masters.
Tanya DeSelm

For six long years, Charles Howell III habitually sat in front of his television and watched his dream go on without him. Growing up in Augusta, Ga., the Masters Tournament was in his blood. He couldn’t simply tune out.

There it was in 2018, another telecast — and this time Howell was watching with his sports-obsessed six-year-old son, Chase. “Dad, don’t worry,” Chase said. “I’ll qualify for the Drive, Chip & Putt and get you back to Augusta.”

Howell, who checks in somewhere behind Justin Thomas as his son’s favorite golfer, could only laugh.

“For a while I figured that was my best way of getting back there,” Howell said. 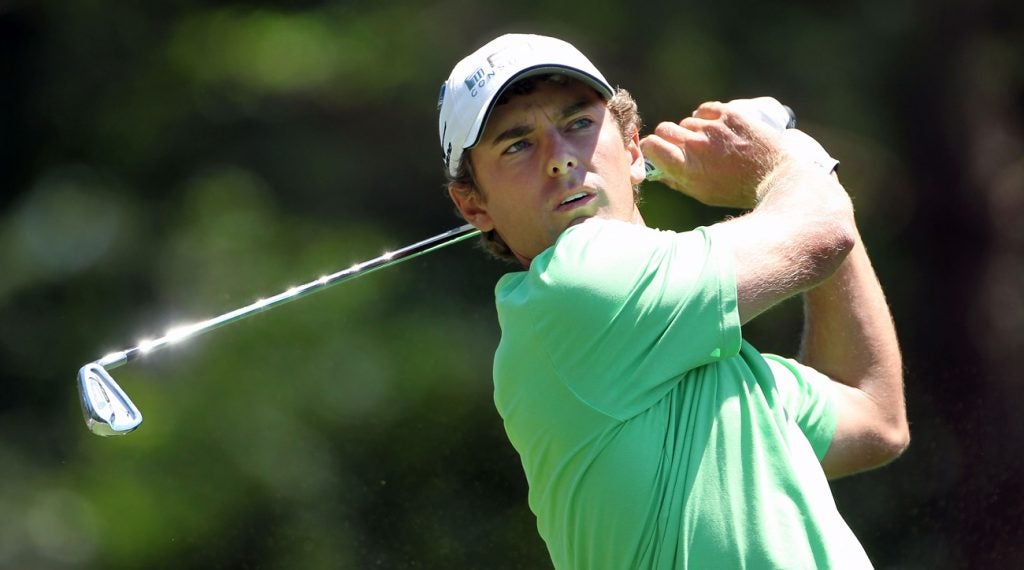 Charles Howell III competing in the Masters at Augusta National in 2012.
Getty Images

Starting times at the Masters used to come relatively easily to Howell, who discovered golf in 1987 at age seven when in a span of a few months he attended his first Masters won by local favorite Larry Mize and swung his first golf club in his neighbor’s backyard. The game and the tournament had its hooks in him.

Five years later, at age 12, Howell played his first round at Augusta National as a guest of a member. He shot 79. Over the next 10 years, he notched a record-smashing 2000 NCAA title, the Fred Haskins Award as collegiate player of the year at Oklahoma State, 2001 PGA Tour Rookie of the Year honors, and an invitation to his first Masters courtesy of his world top-50 ranking a year later.

Before that 2002 start, which was the first of what would be seven consecutive Masters appearances for Howell, he said, “Playing the Masters means the world to me, and it was a lot of hard work.”

The younger Howell had no real idea how hard it actually was until he started finding himself outside looking in most of the last decade. Despite a career that keeps churning out million-dollar seasons, only once in the past 10 years has Howell qualified for his hometown major, finishing tied for 19th in 2012. Too often he’s painfully endured near misses on Sundays or burst bubbles on the wrong side of the FedEx Cup top-30 or Official World Golf Ranking top-50 deadlines.

“Probably my earlier years I might have taken qualifying for it a little for granted,” Howell said. “Being on the other side of it and finishing between 51 and 60 in the world ranking a lot, you learn it’s a really hard tournament to qualify for. I have a great knack for finding myself on a lot of bubbles.”

It wasn’t supposed to be this hard for Howell. Much more was expected of him than two decades of relentless consistency on the PGA Tour, never earning less than $1.2 million a year or ever having to worry about losing his Tour card. Howell was considered the first great American “young gun” in the post-Tiger Woods era. But 18 years after turning professional and already among the top-20 career earners in history with more than $36 million, Howell should have had more to show for his efforts than three Tour titles.

“I’m not going to go out and sell myself on potential anymore,” he said. “I have a track record that is what it is. I totally understand everybody who defines success by wins. I wish that I was sitting on that side of the argument more. Let’s say we’re having this conversation and I have 12 or 13 wins, but I don’t.

“You do start questioning a whole lot of stuff,” Howell said of a victory drought that extended nearly 12 years after his playoff victory over Phil Mickelson at Riviera in 2007. “You question preparation, you question how you go about everything, and for me going a long period of time not winning you question whether maybe I’m just not cut out to win. Maybe I’m gonna have a nice stable career and winning is not going to be a part of it.

“I see guys who win a whole lot with regular consistency and you think maybe he’s wired differently or sees things differently and what is he seeing different than I am. For a while I was staying up at night and grinding myself and wondering why am I not winning more. But I realize I can only do what I can do and keep working on the parts of my game that are lacking.”

It had been 11 years and nine months since his last victory when Howell descended on Sea Island Resort for the final event of the 2017-18 season and shot to the top of the leaderboard with a pair of 64s in the opening rounds. The hunt was hardly unfamiliar territory for a player with 25 second and third-place finishes.

“Winning takes really good golf at the right time with the right break in there,” he said. “Now, that’s coming from somebody that’s got a whole lot of seconds and thirds and not a lot of wins. … The line between first and second is a big line.”

Howell started Sunday with a one-shot lead over golf’s latest power-hitting wunderkind, Cameron Champ. Naturally, the veteran with all the scar tissue chopped it around the first two holes for a bogey and double to cough up the lead he’d held since Thursday.

“I’ve seen this rodeo before,” said his mother, Debra, who imbued her oldest son with his gallows sense of humor.

Howell admits the same dark thoughts entered his head inside the ropes. But a funny thing happened on the way to another disappointment. He settled down and made a couple of birdies to regain his footing. Then birdies at 15, 16 and 17 got him into a playoff with Patrick Rodgers.

“In a weird way it almost helped me because I shot myself in the foot and could play from behind with nothing to lose,” Howell said. “I probably wouldn’t have seen it that way before. … You come to the point where you play this god-forsaken game enough there’s a bit of fatalism to it.”

On the second playoff hole, Howell’s 22-footer for birdie dove into the hole and Howell crouched to his knees.

All the emotions of 4,292 days and 333 tournaments between victories came pouring out in tears as Howell’s kids and wife, Heather, rushed onto the green to hug him. His parents and younger brother, Ben, were also there for the first time to witness him win.

His first thought when the ball disappeared was relief; his next was the Masters.

“Really nothing else came to mind, because it’s such a big deal,” Howell said of his automatic spot at Augusta. “If that putt lips out and I lose the playoff, we’re not having this conversation. That’s how fine the line is. It changes an entire schedule, everything.” 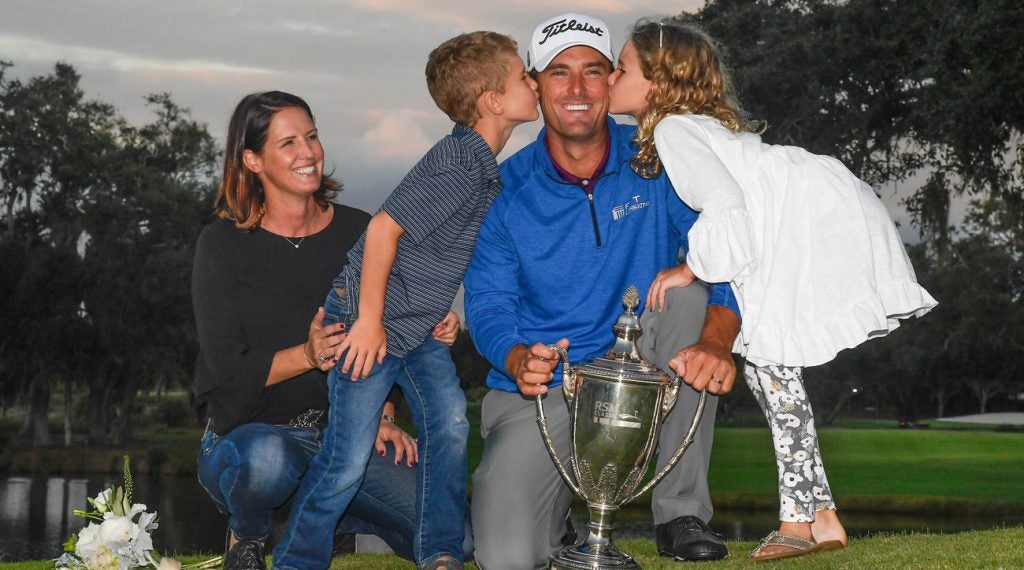 Charles Howell III with his family after winning the RSM Classic.

For the first time in six years, Howell could enjoy the offseason and play the months leading up to the Masters free of all the pressure of qualifying. More importantly he’s lifted the burden off his seven-year-old son to get him back there via the Drive, Chip and Putt.

“He can’t wait,” Howell said of Chase’s chance to put on the white overalls with his big sister, Ansley, and caddie in the Par-3 before watching their father compete on the big course. “Now they get to be a part of it and are of an age to understand the whole show. The Masters is a big show.”

Howell is returning to his childhood home with a new perspective on a life-long obsession.

“I’ll try to enjoy it more this year, with more fun built it because of the kids,” he said. “I hope it won’t be my last, but I’ll go into it a lot differently than before. I will make a big effort not to build it up more than it needs to be built up.”

That’s easier said than done for everyone in the Masters field, much less a homegrown player. Howell’s previous experiences at Augusta run the gamut — from a career-best T-13 in 2004 when he broke par three rounds but shot 76 playing with the eventual champion Mickelson on Saturday to finishing dead last in 2006 with rounds of 80-84, including a record quintuple nine on No. 11.

“I’ve always wondered if my hometown event was the John Deere Classic, would it feel different,” said Howell, whose only major top-10 was a T-10 in the 2003 PGA Championship at Oak Hill. “It just so happens that my hometown event is also the biggest event in the world. I’ve tried to sort of separate myself a little bit from that. It’s not fair to put too much pressure on myself because everybody is feeling it more there than normal.

“But then again I do have so many friends and family in the area that I do want to do well in front of them. I’m really hoping going into it this year I can be a little more mature in that area and enjoy the event a little bit. I think I’ve got a much healthier appreciation for how hard it is to just get in the golf tournament.”

After six long years away from home that Howell calls “an eternity, another lifetime ago,” whatever happens at the 2019 Masters will sure beat watching it on TV.