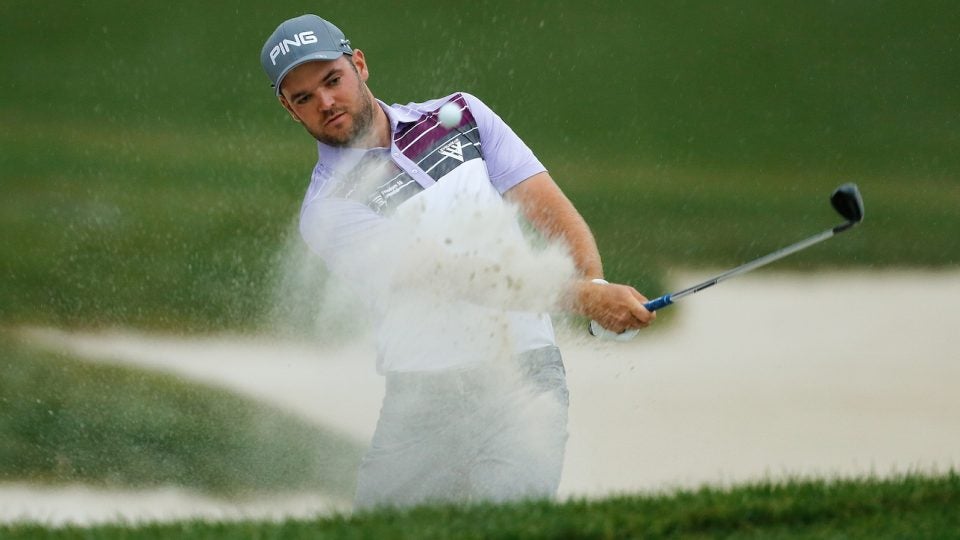 PALM HARBOR, FL - MARCH 10: Corey Conners of Canada plays a shot from a bunker on the 17th hole during the third round of the Valspar Championship at Innisbrook Resort Copperhead Course on March 10, 2018 in Palm Harbor, Florida. (Photo by Michael Reaves/Getty Images)

PALM HARBOR, Fla. (AP) — Tiger Woods chipped in from behind the ninth green and the roar was unmistakable, the tree-rattling variety that belongs to only one player in golf. Moments later, Woods raised the putter in his left hand as another birdie putt dropped for a share of the lead at the Valspar Championship.

Corey Conners heard the whole round and it made him smile.

Never mind that Conners had six birdies in his round of 3-under 68 for a one-shot lead Saturday as he tries for his first PGA Tour victory. Even the players trying to beat Woods got swept up in the emotions of seeing him closer than ever to having a chance to win again.

“I can confirm he’s back. The roars are back,” said Brandt Snedeker, who was along for the ride with Woods and matched his 67. “It’s fun to hear the crowd going crazy again and realize how excited we are in having him back out here and play the way he is. He’s playing great.”

Conners, the Canadian rookie in only his 17th start on the PGA Tour as a pro, saved par from the bunker on the par-3 17th and kept his cool when his ball moved slightly on the 18th green — no longer a penalty in those circumstances — before he tapped in for par.

He was at 9-under 204 and will play with Justin Rose (66), who joined Woods and Snedeker at one shot behind. For the second straight day, Woods and his thousands upon thousands of fans will be ahead of him.

So he at least knows what to expect.

“I kind of knew what was going on without even having to see it,” Conners said. “But it will be cool. It’s fun seeing him out there today, and I’m sure he’ll be battling hard tomorrow. But hopefully, I can play my game and have a good day.”

Conners smiled when he heard the cheer for Woods when he chipped in at No. 9.

For so many years, such a roar caused far more consternation than celebration among the rest of the field. Conners grew up idolizing Woods for his 14 majors and 79 victories on the PGA Tour, and it was hard not to get caught up in so much hysteria.

Conners still settled himself with a wedge he nearly holed on No. 9 for a birdie of his own.

Woods looked as though he might seize control after his birdie on No. 10 to reach 8 under, tied for the lead.

He hit wedge into 7 feet below the hole on the par-5 11th, and another roar erupted. Woods missed.

Approaching the 12th, where four small grandstands covered by tents and a large grandstand to the right of the green were filled with fans who were looking for reasons to let loose. Anything on the green would have sufficed, and Woods played it beyond the pin and used the slope to get the ball rolling back to 8 feet.

At this point, the gallery was so delirious they couldn’t sync up their chants. Some were yelling, “Tiger! Tiger!” Others were yelling, “U-S-A!” Most were just screaming. And then Woods missed again.

He dropped his only shot on the next hole when his tee shot sailed over the green into matted, thin grass where the gallery had been standing. He laid open a lob wedge and swung hard on a tough flop shot, only to come up short and into the bunker. About the time he was dropping a shot, Conners was across the lake at No. 12 and rolled in a 20-foot birdie putt to stretch his lead to two shots over Rose, three shots over Woods.

Most of the fans in the bleachers had their backs turned to watch Woods.

“I was walking down the sixth and looked over to the fourth green,” Rose said. “I said to my caddie, ‘Have you ever seen those crowds?’ Eight-deep back there. It was a view that certainly wouldn’t have been the same had he not been playing. He’s on the leaderboard and challenging for the lead. I think it’s exciting to have him back for the casual golf fan, but now the true Tiger fans get excited.”

And that includes Woods.

“I am excited,” he said. “I feel like I’m playing a bit better and cleaner. I moved myself up the board. I know it’s packed up there, but at least I got a shot.”

Woods hasn’t won since his seven-shot victory in the Bridgestone Invitational in August 2013. He hasn’t won a tournament when trailing going into the final round since the AT&T National at Congressional in 2012.

It has been a remarkable return from his fourth back surgery just 10 months ago. And to think five months ago, Woods wasn’t sure if he would ever be able to compete at a high level. He said his doctors had not given him clearance to hit balls.

And here he is, one shot out of the lead, and knowing that his work is not done.

Rose holed out from 120 yards for eagle on the 11th hole, added a few birdies and got himself into the final group with a rookie who so far has shown the poise to block out everything around him.

“This ignited it for me,” Rose said upon watching a replay of his eagle. “I was kind of getting a little frustrated, seeing the scores were decent. I needed something to happen. I made that one. I putted really, really well on the back nine. Every putt I had, I thought would go in. Fun day.”

Snedeker, coming off a sternum injury that knocked him out of golf for the second half of last year, was equally impressive as the guy in his group everyone came to see. He twice matched birdies with Woods with 12-foot putts, and after falling two shots behind and the crowd getting louder by the hole for Woods, Snedeker battled back with a pair of birdies for a 67.

He will play with Woods again in the final round and knows what to expect. This will be the fifth time Snedeker has played with Woods this year.

“Loud as I’ve heard it in a long time,” Snedeker said.