FARMINGDALE, N.Y. — Brooks Koepka may not be not the superstar we want but he is the one we need. In this permissive era of wayward bomb-and-gougers, his tight, precise game is a welcome antidote. The essence of major championships is controlling your golf ball and we can now safely say that few have ever done it better than the 29-year-old Koepka.

Even before this week the two-time defending U.S. Open champion was a golfer of historical importance. Now he is a player for the ages, after three days of record-smashing dominance and then a brawling finish at Bethpage Black. His triumph at the 101st PGA Championship gives Koepka his fourth major championship victory in his last eight tries, matching the career haul of Old Tom Morris and leaving him just one behind the likes of Lord Byron and Seve Ballesteros.

With his overwhelming power and delicate touch and a life organized around peaking at the most important tournaments, Koepka is redefining how the modern game is played. Make no mistake, this is not a hot streak. Koepka is now the new standard, and his outsized influence is already being felt by the vanquished.

On Saturday, Xander Schauffele admitted to feeling “melancholic” as Koepka rendered every other player in the field obsolete. Schauffele had the same hangdog expression that Ernie Els and Sergio Garcia and countless others wore during the aughts, when Tiger Woods raised the bar to previously unimaginable levels.

Players of Koepka’s generation watched from afar and followed the template, packing the gym and the range. Now big, bad Brooks has taken this evolution to the illogical extreme, turning into a Trackman-optimized killer with ambition as big as his biceps. If he can avoid injury, ennui and scandal, he will be the prohibitive favorite at every major championship for the foreseeable future, and his fellow competitors know it.

They skulked out of Bethpage looking for any signs of hope. Just as Woods’s brilliance pushed Phil Mickelson to dig deep to find his inner Hall of Famer, “Brooks gives us something to aim for,” says Tommy Fleetwood, who finished in 46th place, 16 strokes back. “In a good way it will pull us all up to be better. Definitely for me, to have a guy like Brooks to look at, to want to know what he’s doing that’s better than me, it’s only going to help. It’s only going to help my career to have that to aspire to. It’s a good thing at the moment.” 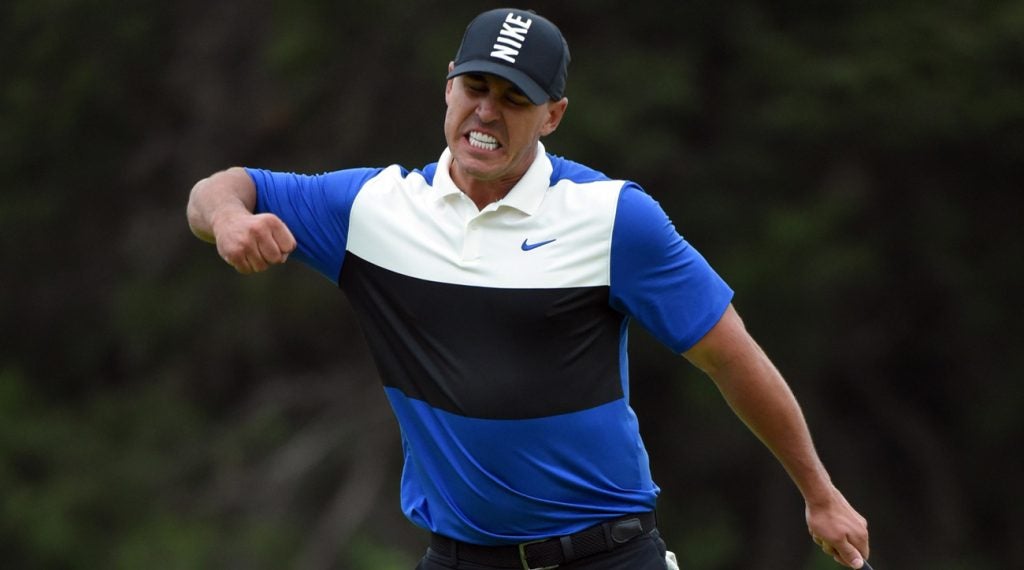 In the champion’s press conference, Koepka made it clear that he’s not about to get complacent, saying, “It’s been a hell of a run. It’s been fun. I’m trying not to let it stop.” Koepka was not a top college prospect and began his pro career in exile on the Challenge Tour in Europe. Ever since he’s had a well-documented chip on his shoulder. Can he maintain that flintiness now that he’s the toast of the town? “There’s always a chip,” he says. “I think that’s important. It works for me. Why would I stray from that?”

In the past, Koepka’s stoicism in victory has also been used against him, fueling the empty tropes that he doesn’t really like golf and/or thinks he’s too cool to care about winning. The lusty fist-pump on the final green at Bethpage put lie to that, as did the huge grin Koepka wore throughout all the pageantry that followed.

“I know for a fact that was the most excited I’ve ever been in my life ever there on 18,” he said.

His clutch par on the 72nd hole — he got up-and-down from 67 yards after an errant drive — gave Koepka a closing 74 and two-stroke victory over his former rival Dustin Johnson, ending a nerve-jangling back nine. Koepka had begun the final round with a whopping seven-stroke lead and produced steady, slightly cautious golf, going even par over the opening nine holes. In by far the toughest winds of the week, Johnson’s front-nine 32 allowed him to close within four strokes.

His interest thus piqued, Koepka stuffed his tee shot on the long par-4 10th. On cue, Johnson bogeyed No. 11 out of a greenside bunker, Koepka brushed in his birdie putt and the lead was back to six with eight holes to play. But a series of loose swings led to four straight bogies for Koepka beginning at the 11th — “I wasn’t nervous, I was just in shock, I think” — and when Johnson birdied the 15th, the lead was down to a lone stroke. A portion of the crowd was openly rooting against Koepka — a smattering of chants of “Dee-Jay! Dee-Jay!” rang out across the grounds — and Koepka said he understood: “What do you expect when you’re half-choking it away?”

But Johnson blinked first, making two straight bogies, and Koepka did what he had to do to nab the Wannamaker Trophy.

“To be standing here today with four majors, it’s mind-blowing,” Koepka said. “Today was definitely the most satisfying out of all of them for how stressful that round was.”

The inartistic back-nine should not overshadow all the rousing golf that preceded it. Playing alongside Woods, Koepka opened the tournament 63-65 in an unmistakable passing of the torch. A two-round score of 128 would be spectacular at the Bob Hope; to do it at mighty Bethpage, cloaked in an oppressive PGA Championship setup, was simply preposterous. It was the largest 36-hole lead at a major since tweedy Henry Cotton led the 1934 Open Championship by nine at the midway mark.

Yet following the second round Koepka announced he was unhappy with his ballstriking and marched to the range to grind on his swing. This maniacal work ethic owes much to Woods’s influence, too. The next afternoon Koepka began his round by stuffing his first five approach shots to 8, 5, 16, 11, and 2 feet, respectively, going 14 deep on the leaderboard. He was relentless in increasing his lead to seven strokes through 54 holes. Sometimes stats do, in fact, tell the story: To that point, Koepka led the field in strokes gained tee to green, strokes gained approach, greens in regulation, approach shot proximity and scrambling.

An air of incredulity filled the air at Bethpage as surely as the obnoxious braying of drunken New Yawkers. “Playing the practice rounds, I thought anything around even par was going to be a great score,” Tony Finau said. “This guy is making me realize I need to think about things differently.”

It is a quirk in Koepka’s resume that to this point in his career four of his six victories are majors. But it augers for more dominance in the only tournaments that really matter. Explains Henrik Stenson, “On easier courses, where there is not such a penalty for bad drives and many players have wedges into greens, it is much harder for him to separate himself. A really tough setup brings out Brooks’s advantages. He’s so straight off the tee he is going to hit many more fairways than the average player. And he’s so long he’ll have less club into the green so he’ll hit it closer. If he misses the fairway he still has less club and he’s so strong he can muscle the shot onto the green when others can’t. And then he makes the putts. When you put it like that, it sounds like we’re in trouble, doesn’t it?”

Indeed it does. With his brooding intensity and contrarian streak, Koepka may never enjoy the widespread love he deserves, but really, it’s better this way. He is the perfect anti-hero for these superficial times. Koepka’s contemporaries turn every vacation into a social-media event and prostitute themselves in the equipment marketplace to the highest bidder at the expense of their performance. Koepka has no club contract and no Twitter game. He is a monument to substance over style. Filter out all the other noise because achievement is the only thing that matters. When you think of it that way, we should be grateful that Koepka has emerged to redefine his era.