PGA Championship 2019: Rowdy Bethpage crowds are (mostly) embracing Brooks Koepka and an event that’s all but over 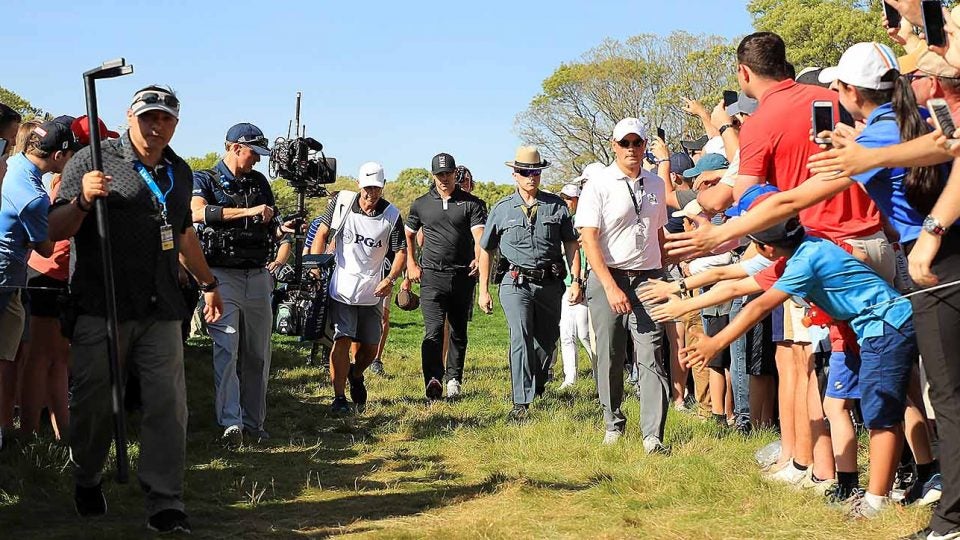 Brooks Koepka shot an even-par 70 on Saturday at the PGA.
Getty Images

FARMINGDALE, N.Y. – The Wanamaker trophy may be ready for an early engraving at the 2019 PGA Championship, but don’t tell that to the paying public. They’re out here giving it everything they’ve got.

There was Brooks Koepka on the 1st tee on a sun-drenched Saturday afternoon, playing alongside Jordan Spieth in the day’s final twosome. Koepka led Spieth by seven, a record margin for 36 holes. This thing is over, but the grandstands around the two players were full, while thousands more fans lined the fairway ropes. This place calls itself “The people’s country club,” and the people came out for it.

Weekend ticket prices on the secondary market seem to have tanked, which is understandable with the outcome all but decided. (The PGA said each ticket this weekend has long been sold, but they don’t announce daily attendance numbers.) It’s easy to imagine TV ratings might also sag. But what about the masses who came here to witness this PGA in person? Would fans enjoy watching an event that has all the suspense of melted ice cream?

It says here that Saturday’s Bethpage crowd was still into it. It also says that beer sales remained steady. Some of these fans are embracing Koepka. Back to that 1st tee.

“Stop being so good-looking,” screamed one fan. (Seriously.)

“Give me some money, Brooks!” said a spectator with an apparent wager on the line.

That’s how it went all afternoon as Koepka marched to an even-par 70, with loudmouths popping up here and there. This week’s two most reliable fan favorites are out of the mix – Tiger Woods missed the cut, while Phil Mickelson trudged through a third-round 76 and finished nearly two hours before the final pair. A spin around the course revealed that fans have developed a grudging acceptance – and occasionally, admiration – for Brooks Koepka, man of the week.

“The fans have been positive and the enthusiasm has been huge,” said Chris Brockett, 32, of Branford, CT. “I’m more of a Spieth fan, but I’m shocked how good the crowds are today.”

“I like Brooks – he’s all about business,” said Jeff Cereghino, a 39-year-old from nearby East Meadow. “He’s like the Ivan Drago of golf. He beat Apollo yesterday, and today he’s playing Rocky.”

Yep, Koepka KO’d Apollo — er, Tiger — by 17 shots over 36 holes. And Spieth didn’t have quite as much fight on Saturday as Sylvester Stallone’s famous character (Spieth didn’t make a birdie until the 12th hole and signed for a two-over 72). But Koepka has enjoyed an apparent surge in popularity. He uttered several smart sentences at his pre-event press conferences, and perhaps none were wiser than these: “It’s a fun place to play. It’s a fun place to play in front of the fans. They’re all energetic, and you come back and you’ve got good feelings this week and just kind of hopefully you ride that momentum.” That was letter perfect. Fans respond to it.

“I like Koepka because he’s No. 1,” said Anna Arimina, of Huntington Station, while hanging out near the 5th hole ropes. “He’s who I’m most interested in. I think he’s surprised people.”

So, maybe New York fans are warming up to him. They love a winner. But there was also a telling little moment Saturday afternoon as Koepka and Spieth played the par-4th 6th hole. That tee sits near the 12th fairway, and as Koepka and Spieth strode to the box, Rickie Fowler was playing up No. 12. Fowler has no shot at winning this tournament, but hundreds of fans peeled away from the final group to watch Fowler hit his approach shot. Then they stayed with Rickie from there.

“I like Brooks more now that he’s opening up, doing podcasts and showing his personality,” said Greg LiCalzi of Manhasset. “But no one is going to show him the love of Tiger or Phil. It’s not a knock on him, that’s just how it is.”

So, that’s how it is, at least for now. Koepka is one day away from hoisting the Wanamaker for the second time, and he might smash a few more records along the way. The fans will show up Sunday and the drinks will flow. Maybe they’ll show him a little more love.