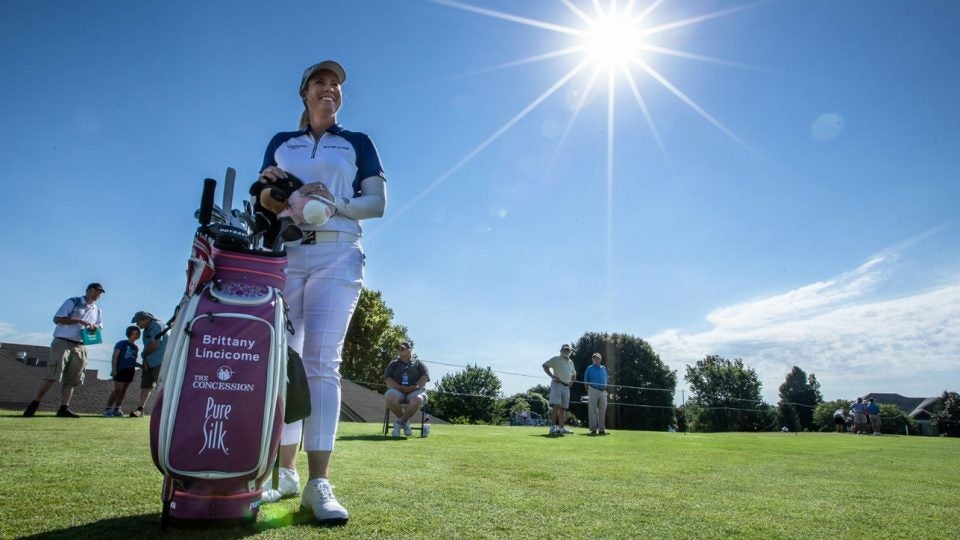 Brittany Lincicome will miss the cut in her PGA Tour debut, but she posted a strong weekend round nonetheless.

Playing at the Barbasol Championship on a sponsor’s exemption as just the sixth woman to compete on the PGA Tour, an admittedly nervous Lincicome opened the event with an uneven 78 on Thursday. After weather postponed her Friday round, Lincicome teed off Saturday morning and made the most of it, recording five birdies and an eagle against six bogeys en route to a one-under 71. The projected cutline at the time of her finish was four under par; Lincicome’s posted total was five-over 149.

As for that eagle? Earlier in the week, Lincicome joked that since she wouldn’t be able to reach the par 5s in two shots she’d have to attack them “the old-fashioned way.” That approach certainly worked at the 569-yard 17th. After hitting the fairway, Lincicome layed up to 116 yards and promptly holed that shot for an eagle 3.

Although she failed to become the first woman since 1945 to make a cut on the PGA Tour, Lincicome was upbeat throughout the week. When told of one young admirer who had been following the group, she smiled in response. “Oh, that’s so cool,” she said. “Yeah, I need to go back over there and sign their autographs. Any time I can influence a child, especially a girl, obviously I want to get them involved with the LPGA as much as possible.”

While declaring “never say never” about a potential return to the PGA Tour, Lincicome said she’ll cherish the moments from this week. “I’ll remember this forever,” she said.