Attend Stanford graduation or U.S. Open Sunday? For an amateur under par, it’s a no-brainer

PEBBLE BEACH, Calif — I met my young housemate, Brandon Wu, Monday night at about 9:45, in the dark, by the front door. Earlier that evening, I had attended the World Golf Hall of Fame induction. Brandon and 14 others had been at the Cypress Point Club, for a coat-and-tie dinner for all the amateurs in the field. Mark O’Meara, a Hall of Fame member, was at both, leaving the induction and heading over to Cypress to talk to the amateur golfers. Our landlord (in a manner of speaking), 84-year-old Sam Reeves, was asleep by then, but his wife, Betsy, was not. She showed Brandon to her office, where a rollaway bed awaited him. For Brandon — a senior at Stanford, winners of the NCAA national golf title last month — the week was off to a good start.

And then it got better.

For one thing, Butch Harmon, Sam’s alter ego, moved out Wednesday morning, and Brandon took over his room, with its big bed and its own shower and curtains you can close by pressing a button. On Thursday, Brandon shot an even-par 71 and followed that with a 69. He was even for two rounds, he had a Tour caddie (Charley Hoffman’s regular man, Andy Barnes) on his bag and he looked nothing like a Del Monte Forest deer frozen by oncoming headlights. His Saturday 71 put him at two under for the tournament, tying him with Dustin Johnson and Francesco Molinari. Through three rounds, he’s the low amateur. On Sunday, he’ll play with DJ and go off at 3:51 ET. Ninety miles north, in Palo Alto, his classmates will graduate. 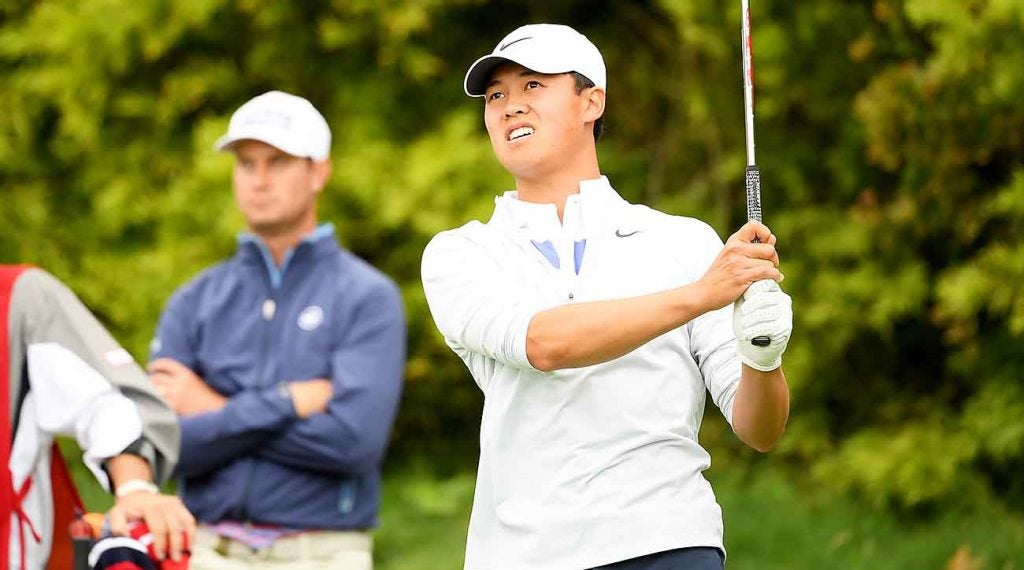 After he holed out on 18 on Saturday, a closing tap-in birdie 4 that he celebrated with two mild, belt-high fist pumps, he took questions from reporters as if he has been doing this all his life. He’s 22.

He’s been to Pebble Beach for a U.S. Open before, in 2010, with his father, as spectators. “The biggest difference is that then there were no cellphones and now they’re everywhere,” Wu told me early Saturday night, shortly after signing his card. Also, then he was sitting in the grandstands. Now the grandstand residents have Koochified his name. His closing birdie was greeted with a chant of WooWooWooWoo. His parents, Yichun Wu and Xiaobing Zhang, must be astounded by the developments. They were born and raised in China. The father owns a scrap-metal business in New York, and Brandon and his family lived in Beijing for five years while he was growing up.

The family belongs to the Scarsdale Golf Club, not far from Winged Foot. The actor Jon Voight’s father was the longtime pro there. As it happens, Butch Harmon’s father, Claude, was the longtime pro at Winged Foot. Butch and Jon Voight were friendly as kids. None of that has helped Wu shoot 211 for three rounds, but golf does have a knack for concentric circles. “I was telling Mr. Reeves that when I moved into Mr. Harmon’s room, I kind of felt like some of his good teaching rubbed off on me.” We’re not talking about actual fact here. We’re talking about a vibe.

Tournaments
U.S. Open 2019: What you need to know for Sunday at Pebble Beach

Brandon’s path to the Reeves house came by way of his fellow Cardinal, Jamie MacFarlane, one of Sam and Betsy Reeves’ grandsons. The Reeves house is near the 9th hole of Cypress Point and on Tuesday morning, when four foursomes of former U.S. Open winners came through, Brandon was able to watch this most unlikely parade at close range. “All right, young man, let me see you make a swing,” Gary Player said to Brandon, handing him his driver. Brandon made a swing. Player was, as you might expect, effusive.

Tom Watson, winner of the 1982 U.S. Open at Pebble, is a Stanford grad, and was playing Cypress that morning. Tiger Woods, who attended Stanford for two years, has won three U.S. Opens, including the 2000 Open at Pebble. Brandon has met Tiger twice, and he wanted to go to Stanford because Woods, winner of 15 major championships, had gone to Stanford.

“I’ve heard Tiger say several times that his years at Stanford were the best years of his life,” Brandon told me on Saturday. He talked about one of his close friends at Stanford with a completely different background. “When I was playing golf in high school, he was starting his own business,” Brandon said. He’s moving out of his Stanford room on Monday, but he’ll move out of the Reeves room first.

There was not even a hint of wistfulness in his voice, as he considered the end of his college days. He’s been a full-time athlete and a full-time student for four years, majoring in product design, a branch of engineering. Before Stanford, Wu attended Deerfield, a boarding school in western Massachusetts. He came equipped with a tie for the Monday night amateur dinner at Cypress — “at Deerfield, we had to wear a coat-and-tie to class every day” — and then was given a special USGA tie at the dinner.

He’s having a great week. He’s not Tiger Woods coming out of Stanford in 1996 or Tom Watson coming out of Stanford in 1971. He hopes to make the Walker Cup team this year, being captained by Nathaniel Crosby, Bing’s son and a former U.S. Amateur winner and the low am at the 1982 U.S. Open at Pebble Beach. He expects to turn pro in the fall. It’s all in front of him. Maybe he’ll be an established pro the next time the U.S. Open is played here, in 2027. Maybe he’ll be working in product design. Maybe he’ll be doing something completely different. Who knows? If we knew, life would be so much less interesting. Twenty-two years in, Brandon Wu’s life is way out of the ordinary. My job on Sunday morning is to make no noise.