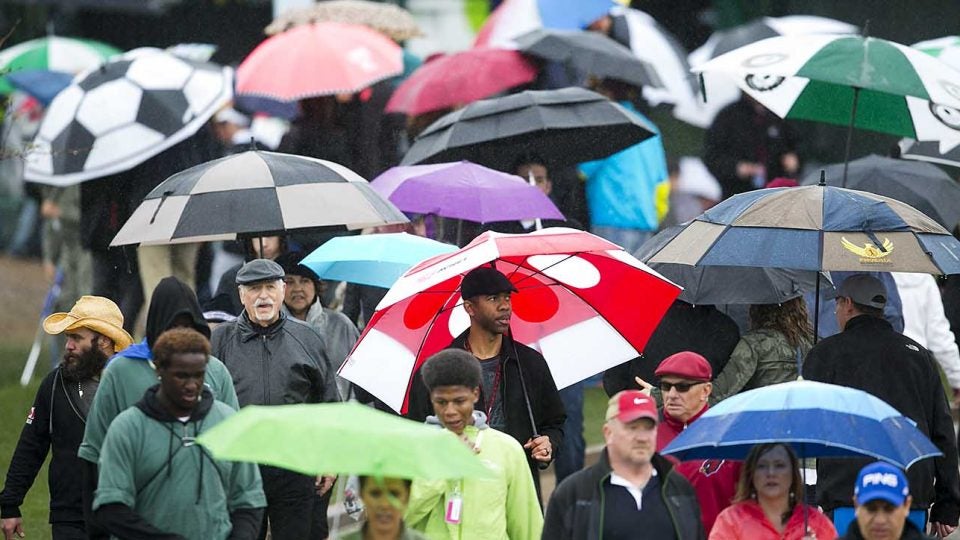 After 36 holes at the BMW Championship, there’s a great leaderboard – Tiger! Rory! Rickie! Rose! — but the weather refuses to cooperate.

Saturday’s third round has been delayed until noon ET, and when players hit the course, they’ll head out in threesomes off split tees on the 1st and 10th holes. They’ll also play lift, clean and place. It’s all done in hopes of squeezing in the final two rounds before Sunday night. Here’s a look at the weather ahead.

As you can see, Sunday’s forecast is also ominous: it calls for 1-1.5 inches of rain and wind gusts in excess of 20 mph throughout the day. In other words, a Monday finish is suddenly a very real possibility. (Then again, look at that wretched Monday forecast! Could we have a — cue the organ music — Tuesday finish?) On the bright side for Tour travel, next week the Tour does not have an event, as players will take a week off before the top 30 in the FedEx standings compete at the Tour Championship at East Lake for a $10 million FedEx grand prize.

So, settle in, golf fans — we may be in suburban Philly for a while.

It's not always sunny in Philadelphia. 🌧

Round 3 is expected to start in 30 minutes. pic.twitter.com/cCSXxdXJAy