SOUTHAMPTON, N.Y. — Rory McIlroy attacks press conferences the same way he does golf courses. He’s generally careful, thoughtful, and reserved, but with some regularity he’ll fire some salvo that unwittingly forces himself into one of golf’s daily pseudo-controversies, the equivalent of one of the wedges he occasionally sails long and left into trouble.

During his remarks Wednesday, McIlroy didn’t take any hot-button issues head-on, deflecting questions on the controversial setup at Chambers Bay and staying relatively complimentary of the USGA. It was a fitting approach for the week — he’ll be approaching Shinnecock Hills in much the same way.

“I think I’ll adopt quite a conservative strategy off the tee,” McIlroy said. “You’re hitting into big targets. So even if you’re leaving yourself back and maybe hitting a couple of extra clubs into these greens, it’s not such a bad thing. I’d rather be doing that than hacking my way out of the rough.”

There’s more gray on McIlroy’s head now, and perhaps more nostalgia within. Several times throughout the presser he referenced Long Island’s courses reminding him of “back home” and said appreciated the area’s tributes to the origins of the game. As for his favorite U.S. Opens? McIlroy began to list them off, beginning with ’99 and Payne Stewart, then Tiger Woods in 2000 (“obviously”) and then Bethpage in ’02. It was clear McIlroy could have kept going, but caught himself. “Hopefully, there’s a kid out there somewhere that’s watching it these days and wants to play in these championships as well, emulate us,” he said. The exchange harkened back to McIlroy’s comments from two years ago, when he stated he felt no obligation to “grow the game.” It was also a reminder that now more than ever, McIlroy thinks hard about what was, and what is, and what ought to be.

Of course, he dipped his toes in some of golf’s hot-button issues, too.

— The course setup? “Honestly, I think they’ve got it right.”

— The high-powered feature groups? “You can put whoever you want together, and any grouping is going to be exciting. But, yeah, I don’t know if it’s just a little bit contrived for my liking.” All fair, and insightful, and relatively down-the-middle.

McIlroy has certainly settled in at Shinnecock and the surrounding area, having played National Golf Links, Friar’s Head and Garden City Golf Club over the last several days. He speaks knowledgably about the area, citing the “Montauk Highway” and “LIE” (Long Island Expressway) like any weekend warrior escaping New York City for the Hamptons. And fear not, traffic-watchers — McIlroy’s commute this week is very doable: just three minutes, door-to-door.

“Not a bad place to spend a couple weeks in the summer,” he said.

McIlroy wasn’t asked a single question about Tiger Woods on Wednesday, which is a rarity. But it seemed telling that he brought up Woods of his own accord, suggesting that the former world No. 1’s reappearance has been key to the success of other young Americans. 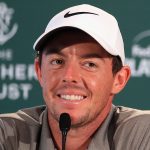 You may also like Rory on the record: McIlroy’s 10 most memorable quotes from 10 years on Tour

“They have probably a couple of guys — but one in particular — that they try to emulate,” McIlroy said. “He’s back out here playing, and he’s become a friend of theirs.”

What remains unclear is whether McIlroy, who’s friendly with but not particularly close to most of his peers on tour, will seek to assume a similar role. “I’m obviously not that old,” the 29-year-old said at one point, though he seemed older just by saying so. What seems more obvious is that McIlroy is enjoying his time here, and golf in general, more than he did before. The NYC-area golf course jaunts? They’re just for fun, and that’s new. “For maybe five or six years, I never played fun golf. It was all to do with getting ready to play tournaments, and I didn’t understand people that went out and played a lot.”

All talk of fun and patience is relative, of course. Still majorless since Valhalla in 2014, McIlroy remains one of the game’s foremost competitors. It’s only natural that he’s antsy to get back in big-time competition Thursday, teeing off at 8:02 a.m. alongside Phil Mickelson and Jordan Spieth.

“I’m happy I’ve got an early tee time,” McIlroy said. “It feels like I’ve been here for quite a while, so anxious to get started tomorrow.”