On multiple occasions in recent years I’ve drifted off to sleep and dreamed of every golfer’s worst nightmare: missing a bucket-list tee time.

The causes of the calamities vary. Sometimes my alarm fails me. I toss my clubs in the car and race to the course, hoping I’ll make it there in time. But no matter how fast I drive, I never make up any ground.

On other occasions, I’ve been unable to locate the course on my GPS, as if Google Maps vanquished San Francisco Golf Club on the day I was supposed to tee it up there. Perhaps the most torturous of my dreams are the ones in which I actually make it to the course on time only to be informed by the starter that my group already has teed off and I won’t be able to join them.

Thankfully, I’d never experienced this sort of horror in real life. That is, until last week, when I came dangerously close to missing out on playing the mother of all bucket-list courses: Augusta National.

I wasn’t supposed to be at the Masters. As an equipment writer, my livelihood revolves around getting access to players, tour reps and peeking inside bags to pick up on potential gear changes, and the Masters is a difficult event at which to do this kind of reporting. It’s a week where I usually kick back and do my job from home. I was expecting to do the same thing this year until I received a call from my editor on the Saturday before Masters week: one of our staffers had to pull the plug on his Masters plans, would I like to go in his place? Um…yes, please.

I sweet-talked my wife into allowing me to book a Monday flight to Augusta and 24 hours later found myself in the five-star workspace better know as Augusta National’s media center. With many of my colleagues on site, my plan was to stay until Friday and then head home for the weekend. I had music programs and events with my kids to attend. Priorities, friends!

Masters press credentials come with the greatest perk in golf journalism: The chance to enter a lottery to play Augusta National on the Monday after the tournament. The lucky winners are announced on Saturday morning, so you have two days to dream about what it’d be like to walk the hallowed grounds inside the ropes.

Considering I wouldn’t be in town for the weekend, I briefly considered passing on the lottery. But what if I won? It was that shred of hope that led me to sign up anyway. I’d figure out a way back if the unlikely scenario presented itself. 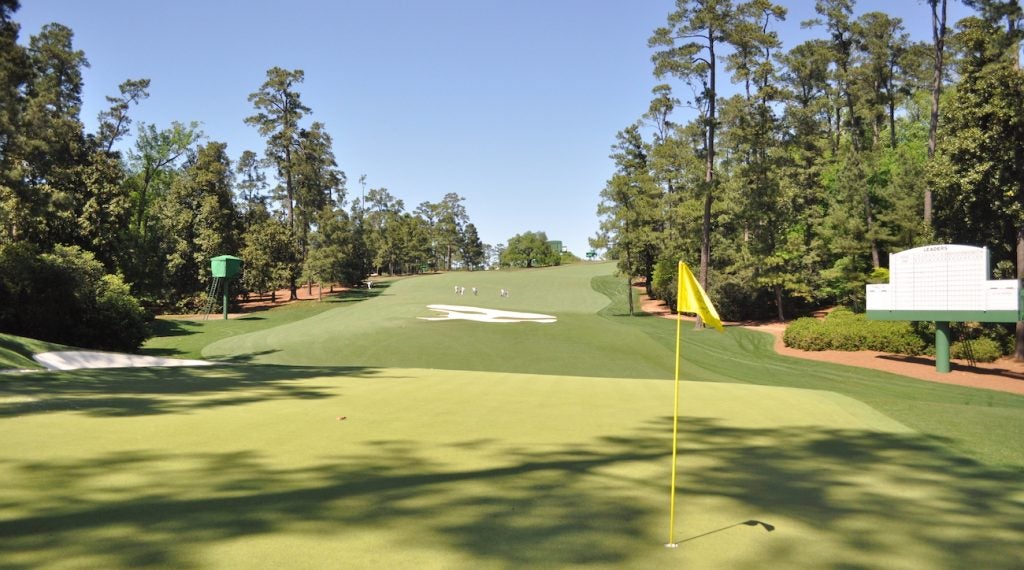 From behind the green on the par-4 10th hole at Augusta National.
Jonathan Wall

By Saturday morning, I was back home in Dallas at an Easter brunch with my kids when the FaceTime calls started coming in. I ignored a couple of them before finally picking up. It was GOLF.com’s dynamic duo of Sean Zak and Dylan Dethier on my screen, with PGA Tour’s Sean Martin and CBS Sports’ Kyle Porter waving in the background. “You won the lottery,” they said, trying to hold back laughter because I’m certain they understood my crazy predicament. “See you tomorrow.”

I was floored. Twenty years after I first stepped foot on the grounds at Augusta National for the 1999 Masters as a freshman in high school — my dad took me for a Wednesday practice round just months after I shattered my left elbow in basketball practice — I was going to play one of the most famous courses on the planet.

Now here’s where the story gets really interesting.

Getting your number called in the media lottery comes with some ground rules. For starters, you must attend a mandatory meeting with the other jackpot winners at 10:30 a.m. on Sunday. I was told by a few of my fellow scribes who’d played in previous years that you do not, under any circumstances, want to miss the meeting. This meant I had less than 24 hours to get back to ANGC.

Getting a last-minute flight to Augusta was doable, but there was no guarantee I’d get out on Saturday evening. Spring storm season had commenced in Texas, bringing with it a deluge of rain that grounded flights leaving Dallas-Forth Worth International Airport. When the storms subsided, literally every available seat on an evening flight was scooped up.

I initially found a seat online, but before I could click purchase, the last remaining seat was taken. After going through the same process a few more times, I finally scored a seat on a flight to Augusta that connected through Charlotte and would allow me, after a two-and-a-half drive, to arrive at our rental house around midnight.

Running on adrenaline, I threw my clubs in a travel bag and headed for the airport. With the rain softly falling on the windshield, I figured the worst of the bad weather was behind us. But I hadn’t taken into account the effect a morning and afternoon of canceled and delayed flights would have on my trip to Charlotte.

Tournaments
Masters 2019: Augusta National has a secret green that no one knows about

Within minutes of sitting down at the gate, I was notified my flight had been delayed 30 minutes. No biggie. Then came another delay. And another. And another. Six delays later, each of which felt like a punch to the gut, a canceled flight seemed imminent.

I considered how the conversation would go when I arrived home to inform my wife I was driving more than 13 hours from Dallas to Augusta — yes, I Googled the trip time — to make it there by Sunday morning. Driving wasn’t really a feasible option, though, and now I’d certainly missed my connecting flight from Charlotte to Augusta. Still holding out hope that we’d take off, I called the National rental-car counter in Charlotte.

“We don’t have any cars, hon,” said a woman with a sweet Southern accent. “You’re out of luck.” I wondered how my bosses would respond to a Charlotte-to-Augusta Uber charge on my next expense report.

With my window closing fast, I resorted to begging. After some finagling and calling around to other rental-car agencies on my behalf — shout-out to Caroline at National — she was able to somehow secure me a car when I arrived.

Suddenly, my luck was turning. The last flight attendant we needed to start the boarding process (!!!) arrived to a standing ovation from the other passengers at the gate. Two hours later, I was on the ground in Charlotte, without a worry in the world.

Until I arrived at the baggage carousel. 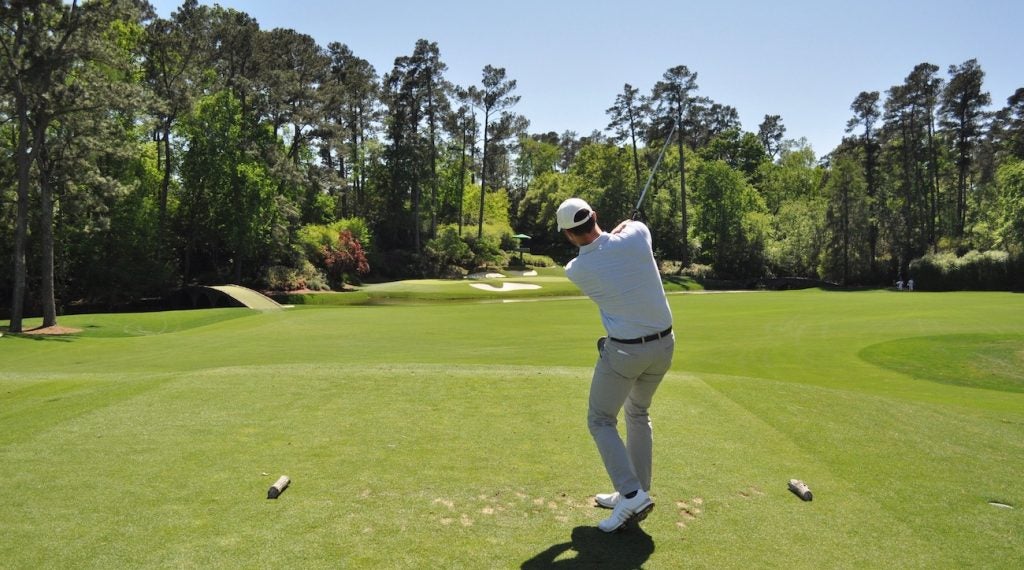 I proceeded to stand in line for almost an hour to learn the fate of my bag, only to be told that, sure, the airline could try to track down my clubs, but because they had been tagged for Augusta, my best bet would probably be to pick them up there. So at 1:30 a.m., just nine hours before my mandatory meeting, I made the executive decision to drive to Augusta without my sticks. With Taurine coursing through my veins, I found my rental car and punched the pedal to the floor.

The rest of the night is a complete blur. I remember arriving at the rental house after 4 a.m. and getting roughly three hours of sleep before I awoke and headed to the course for the early Sunday start. But, hey, I made the meeting!

The only remaining issue was tracking down my clubs, which — surprise, surprise — proved to be an arduous task. They’d never been rescanned when they arrived in Charlotte, so no one could tell me where they were. As a backup plan, I started calling around to golf courses in the area to find a set, but left-handed clubs aren’t exactly plentiful.

I spent most of Sunday morning refreshing the bag-tracking website while keeping an eye on Tiger Woods, who was making a run on the back nine. There was also a massive storm scheduled to hit the course around 3 p.m. that threatened to push the finish to Monday and cancel my round. My head was spinning as I tried to keep up with all of the possible outcomes.

Finally, my bag showed up in Augusta. The storm cell pounded the area just 10 miles to north of us but inexplicably avoided the course. And Tiger won the Masters.

In the span of less than 24 hours, I had gone from utter despair to bearing witness to one of the greatest — if not the greatest — comebacks in sports history, on a course that I myself would play the next day. Even the forecast looked perfect.

As I headed for bed that evening, nothing could doom me — well, almost nothing. I set six different alarms.