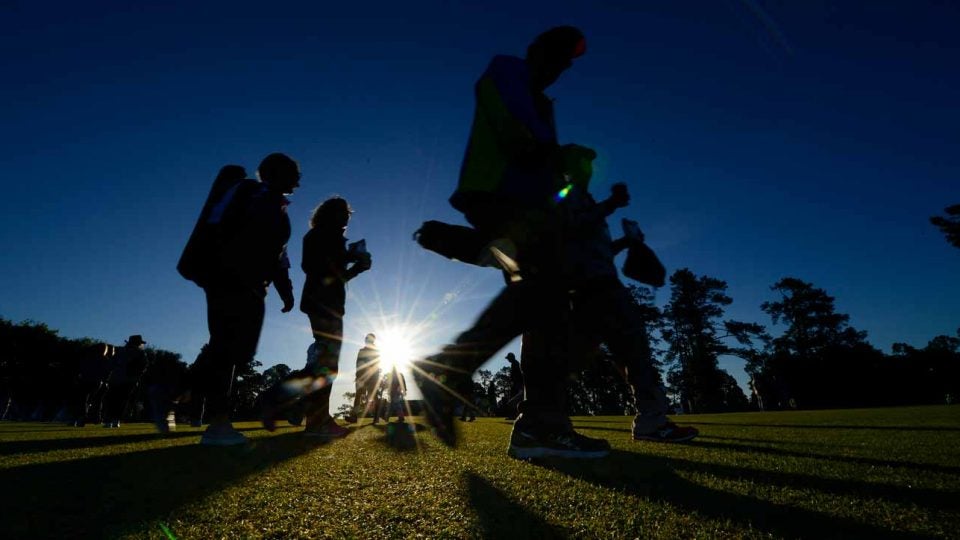 On Friday morning of the 2018 Masters, Johnny Pruitt was just arriving at Augusta National’s 12th hole with a big day planned — plant his chair by Amen Corner, then wander the course — when his friend gave him a funny look.

“I was having a conversation with him and he said that I started mumbling my words,” Pruitt recalls. “I started stumbling and I stopped right in my tracks. And the next thing, he said, was I just fell like a tree, fallen backwards.”

But he had one thing going for him: Dr. Mike Farrell, a gastroenterologist, was just arriving at the scene, too.

“He jumped on me and just started doing CPR,” Pruitt recalls. “And he says, ‘You’re gonna have to get some medical attention here!'”

A cart arrived, and the responders loaded Pruitt onto the back to take away to their emergency tent. But Farrell worried that Pruitt wouldn’t survive that long.

“He says, ‘You just can’t leave him like that on the back of this cart. I’m going to have to get on this cart with him, do CPR, try and just keep him where we have the lungs and the blood moving and we use the Ambu bag to give him some oxygen — and one of y’all is going to have to drive.’”

By the time Pruitt got to the medical tent, he estimates that 20 or 25 minutes had elapsed. He did not have a pulse by this point. He was, to borrow his own words, very much not alive.

“I was turning blue,” he said.

At the medical tent, they restart Pruitt’s heart with an AED — a defibrillator. Then they rushed him off to the Medical College of Georgia’s local hospital.

You can find the rest of Pruitt’s story here — or by listening to the podcast embedded above. But the rest of Farrell’s is fascinating, too. After learning that Pruitt was likely to survive the incident, the doctor thought about how the tournament could have been better prepared to handle the situation.

He found a way to get a hold of Augusta National chairman Fred Ridley and penned a lengthy email in which he offered praise for the responders on the cart and in the medical tent, and said he was ecstatic and amazed that Pruitt had survived the acute myocardial infarction. But the intent of his letter was clear: Farrell was making an impassioned plea for AEDs on every first aid response cart.

“I want to commend the first responders who worked so hard to get the patient to the First Aid tent,” he wrote. “I would suggest, however, that their ability to take care of patients in a crisis situation would be enhanced tremendously if an AED device was on the cart, so immediate care could be provided in the critical minutes after a cardiac arrest. This is particularly important in light of Augusta National’s  “no cell phone” policy, which may make it difficult to get help to a strickened person within minutes — which really does make a difference between life and death.”

To his credit, Ridley took the note seriously. Here’s what he wrote back:

Thanks very much for your email and for the critical assistance you provided, which very likely saved Mr. Pruitt’s life.

Thanks, also, for your suggestions regarding our procedures in situations like this. We strive to improve in every area of operations affecting anyone who is part of the Masters Tournament and I can assure you our procedures will be thoroughly reviewed in light of this situation.

Again, thank you for reaching out on this. I am glad you enjoyed the tournament.

After Pruitt’s miraculous recovery, he returned to the Masters on Friday in 2019. He revisited the site of his cardiac arrest. And he saw some EMTs on a nearby emergency cart.

“I talked to one of the technicians,” Pruitt says. “And he was like, ‘well, we’ve got AEDs on all our crash carts.'”

Farrell’s letter had apparently worked. While it’s difficult to know all the factors involved in the decision — again, Augusta National doesn’t comment on much of anything — Ridley’s response suggests that it had a direct impact.

Augusta National has made one more change, too, that will affect access and safety at Amen Corner. A land-buy from adjacent Augusta Country Club has resulted in a new road that wraps behind the 13th tee. The road could serve several purposes (and has sparked healthy speculation), but a source at the club said in addition to TV and maintenance access, the road could be used in case of a mid-tournament medical emergency.

Is Augusta National’s famous 13th getting a new back tee for this years Masters ? ... or is it just the new road round the course? Interesting 🤔 #kenonthecourse pic.twitter.com/K4Vn5V8nmw

Asked how he felt about bringing about policy change at Augusta National, Pruitt was glib. “Not what you really want to be known for,” he said. “But if it can save a life, as Dabo Swinney would say, ‘I’m all in.'”

You can listen to the Drop Zone podcast, The Man Who Died at Amen Corner, right here on: iTunes | Spotify | Soundcloud | Stitcher