With career win No. 19 he continues to ascend into rarified air. He is now tied on the all-time victory list with the following Hall of Famers: Ben Crenshaw, Ernie Els, Doug Ford, Hubert Green and Tom Kite. Twenty wins has always been a magical number on Tour, pretty much guaranteeing entrance into the Hall. When Dustin picks off his next win he’ll join the following players who won exactly 20: Hale Irwin, Greg Norman and Doug Sanders. And yet…

DJ is just on another kind of good right now. Like Tiger only better. Love his cold-as-ice attitude. What changed for him to get so good? #AskAlan -@PunkLewisGolf

I went deep on this very question in a profile for GOLF magazine. The short version is his personal life stabilized, he dedicated himself to achieving his awesome potential, and he worked diligently to address his weaknesses, chiefly distance control with his wedges. The Tiger comparisons are inevitable, given how prolific Dustin has become at winning Tour events, but when Woods was Johnson’s age – 34 – he had won 14 major championships, so the discussion pretty much ends there. The majors reveal Dustin’s frailties in a way that a pliant setup at the Canadian Open simply can’t. It’s mind-blowing to think that this decade began with Johnson’s 82 at Pebble Beach and, unless he prevails at the PGA Championship, will be bracketed by his Saturday 41 at Shinnecock. In between there have been a dozen other top 10s in the majors, but Johnson has only one victory to show for it. He still has plenty of time to win more majors and change his legacy but right now Johnson is the game’s ultimate Nearly Man.

Has the Scientist become The Mad Scientist after the video of his meltdown on the range then his 4-hole meltdown on Sunday? Crazy/frustration or just crazy/crazy? #AskAlan -@AlanFairweather

Don’t forget crazy good. Bryson DeChambeau is simply the most fascinating player in golf right now. You can’t separate the madness from the genius; I fully expect him to someday cut off his ear with a one-iron. Bryson is not for everybody but the game is much more interesting with him in it. (At the risk of pimping myself out too much, here’s a big feature I wrote about his unique origin story.)

If he doesn’t qualify on points, do you think Bryson’s meltdown impacts the chance of being a captain’s pick? -Josh (@J_Decker84)

It’s a fascinating question. On one hand, he went overseas and took on the burden of leading for 68 straight holes, more or less. It’s gotta be encouraging to Cap. Furyk that DeChambeau’s game traveled like that. But the finish was such a spectacular self-immolation it has to be cause for concern. I’ve said it before, the U.S. Ryder Cup is trying to win a road game for the first time in a quarter-century against a very strong Euro squad so I expect the captain’s picks will be biased toward proven veterans. After Germany, DeChambeau better play his way into the top eight if he wants to be in Paris.

Are the Web.com courses too easy for these players? -25 wins, -6 is the cut. Tour players acknowledging how absurdly low you have to go. These guys are very good. Maybe it’s time to play some tougher courses? -@MattThis59

This is the truest expression of how much distance gains have changed professional golf, and that modern athletes with modern equipment are simply too long and too good for the existing playing fields. PGA Tour agronomists can push a setup so it has fast, firmish greens and some decent rough, and that helps control scoring a little bit on the big Tour. The Web venues don’t get that treatment – they’re just regular courses presented with everyday setups, and as a result they get destroyed. Unless the Web starts playing a Firestone and places like that – which it won’t – scoring will continue to get lower.

Would someone please thrash the golf announcers the difference between “farther” and “further”? -Richard (@jrmdbl07)

Gawd, I can’t tell you how happy it makes me that there are still people in this world who care passionately about such things! 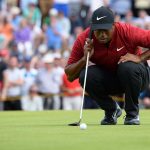 You may also like Tour Confidential: Should Tiger Woods be the favorite this week at Firestone?

Does how the Old Course was received ratings-wise force the Senior British to make a concerted effort at consistently holding the event on Open rota venues? #AskAlan -@TuckerBlanc

It has to. It’s the same with the Women’s Open – the event is elevated dramatically when played on a famous venue. Why was Stacy Lewis’s victory so impactful? Because she birdied the Road Hole on Sunday. ‘Nuff said. Similarly, MAJ’s victory throws into sharp relief what a great talent he is, to go along with his celebrate cool. (OK, here we go again. One of my favorite stories I’ve ever typed was this feature on an epically colorful character.)

Is Woods already a shoo-in for comeback player of the year? -@NaaderBajwa

Put it this way: if he doesn’t win it I’ll be happy to incite a riot by throwing a trash can through a window at Tour headquarters, a la Spike Lee at the end of “Do The Right Thing.”

Can we skip the rest of the PGA Tour schedule and go right to the Ryder Cup? -Bill (@DJohnsonsSWAG)

What, and skip the joy of St. Louis in August, on a boring parkland course? I for one am looking forward to bidding adieu to the summertime PGA with a serious case of chafing. But otherwise, yes, I would fully endorse this idea.