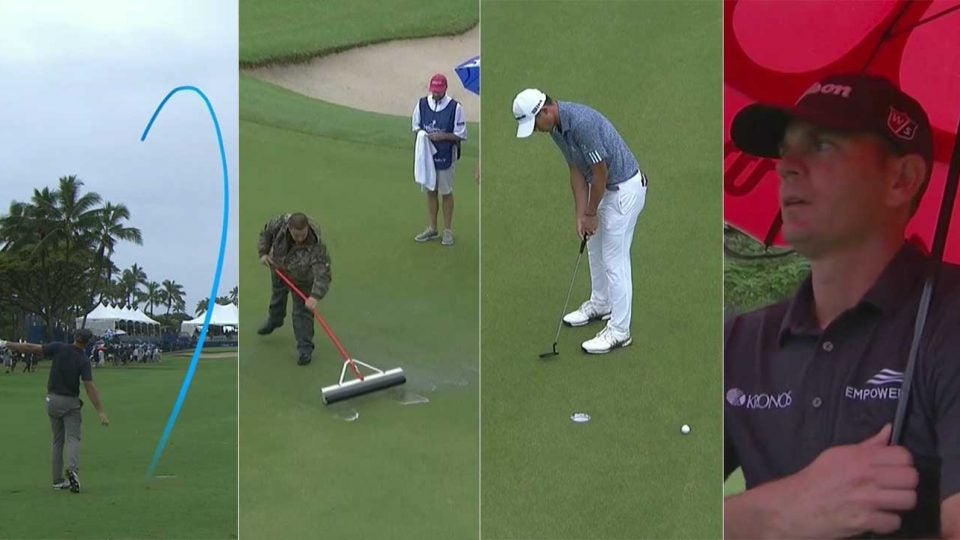 It was a wild Sunday evening in Hawaii.
Golf Channel

Brendan Steele missed the green on the par-3 17th and made a bogey, which cut his Sony Open lead to just one with one to play. Forty minutes later(!) he finished the 18th hole and dashed off for a sudden-death playoff with Cameron Smith. But what happened in those 40-some minutes in between? Well, a little bit of everything.

It was a wet and soggy day at Waialae Country Club in Honolulu, Hawaii, but there were still a handful of players in contention when they reached the par-5 18th on Sunday. An eagle was in play on 18, and with final-round nerves ready to bite at any moment, so were bogeys. Here’s how it all went down.

No one in the third-to-last group was in contention to win, but Hoag was looking to lock up a key top 10, which he did. Once that group cleared, it was go time. Morikawa didn’t have a chance to win anymore, but Simpson and Palmer were both at 10 under, one behind Steele. Smith, waiting back on the tee, was also at 10 under and one back.

Simpson, from the wet rough, was up first and hit a low burner that rolled into the fairway, which gave way to Palmer’s heroic effort from the fairway bunker. The Texan had 261 to the front edge of the green but blocked it way right. It ricocheted off the top of metal scaffolding on a TV screen, and the search for his ball was on.

“Yeah, [the wait] wasn’t helpful,” Steele said. “Stood on the tee for a long time, which was OK because I was kind of collecting myself from 17. I was watching Ryan and trying to figure out what he was doing. I was trying to figure out where he could have possibly hit it, and then I was thinking, Oh, he’s hit it out of bounds right. I was like, Well, we don’t want to do that. So that wasn’t positive at all.”

“I told Slugger driving up, I was trying to hit the left side of the cylinders holding up the scoreboard, not the right side,” Palmer joked.

The wait continued for Steele and Co.: 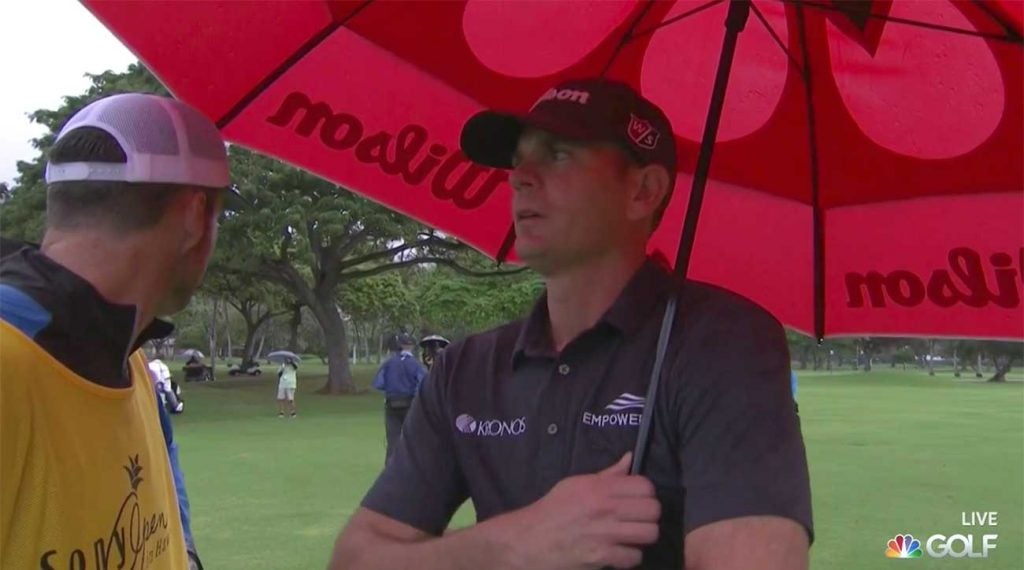 Next was Simpson, who had to wave off more grounds crew staffers who were again marching up and down the green with squeegees. He wedged it to 15 feet and had that left for birdie. Next came Palmer, who dropped from the bunker and knocked it just short of the green. He nearly chipped in for par but settled for a bogey and bowed out of the race for the win.

Simpson lined up his birdie putt that would have tied him for the lead, but he barely missed it out to the left. But just when you thought that was it from this group, it wasn’t! Morikawa waltzed up to his ball to clean up from 4 feet for birdie, but he missed — and then he missed again from 2 feet. It was a rough three-putt to finish for the up-and-comer, who played the last four in three over.

Back in the fairway, with the green finally clear, another 15 minutes had passed since Steele-Smith-Kisner hit their tee shots. Did the nerves get to Steele? Maybe.

Brendan Steele led by 1 when he hit this approach into the 18th hole ... pic.twitter.com/MJOhHbLbME

The 36-year-old had 245 yards to the hole but hooked it well left, and it ricocheted off the grandstands and came to rest near a galley rope on the 10th fairway.

“This is almost in the next area code,” said analyst Paul Azinger, who also used his telestrator to draw this handy circle where Steele’s ball landed: 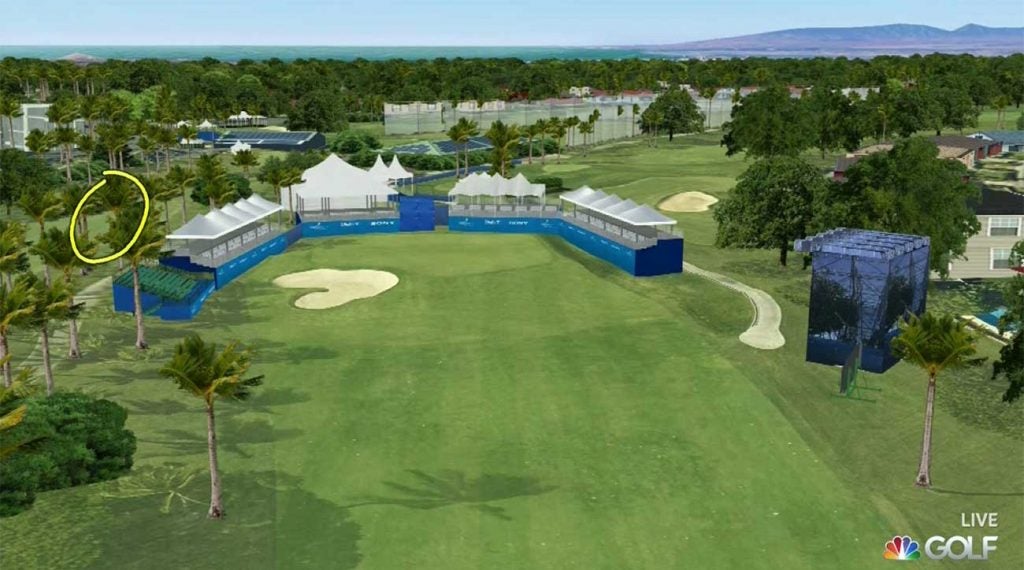 Luckily for Steele, he received a free drop due to a temporary immovable obstruction and had about 75 yards left to the pin. He dropped between a tent and the gallery and — after a car alarm went off, of course — pitched on to about 28 feet. 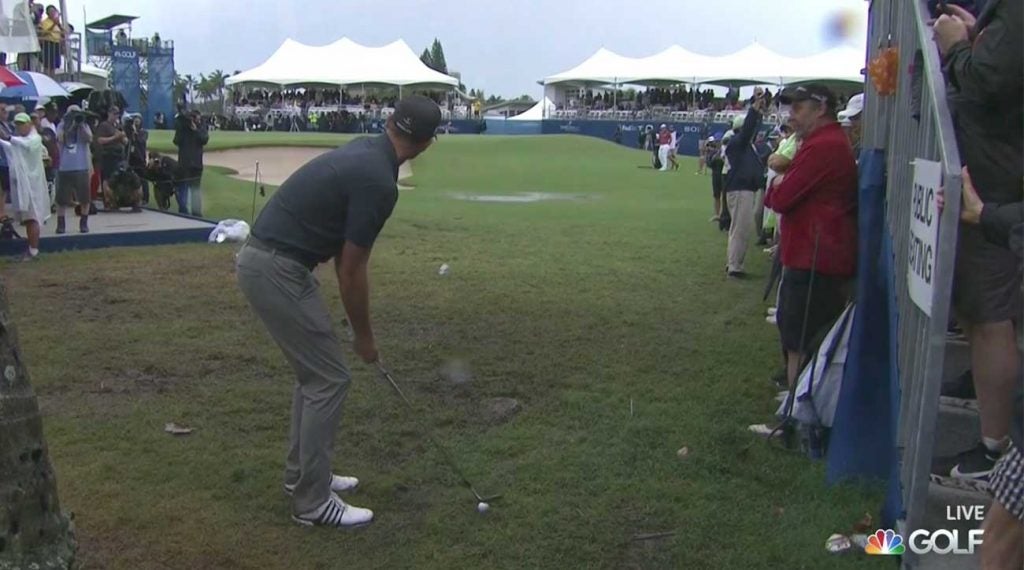 Although Steele lucked out with his drop, his wayward second shot proved costly. He two-putted for par, but Smith got up-and-down from a bunker to make birdie and force a playoff. The extra hole, the par-4 10th, wasn’t as climactic as the 18th, as Smith, the last man standing, two-putted for par to win.

“I just had to hang in there,” Smith said. “No one was playing good golf today seemed like. Conditions got a lot easier at the end there, but just hung in there, and what do you know.”