An 18-hole shootout for $10 mil?! Check out the FedEx Cup format the Tour is considering

The PGA Tour is contemplating a change to the end of the FedEx Cup. One concept being explored is staging the Tour Championship, handing out a trophy, and then the top FedEx Cup finishers playing the next day over 18 holes to determine the winner.

That’s a long way off from becoming a reality, and it includes feedback from the players. One area of dissent is that the current system works fine. There certainly has been no shortage of highlights since it shifted to the current model in 2009. 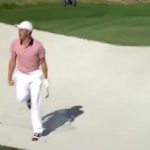 You may also like Who will win the Tour Championship and grab the FedEx Cup? Our experts make their picks

Haas delivered the signature moment when he saved par from the lake on the second playoff hole against Hunter Mahan, and then got up-and-down from a bunker on the next hole to win both titles. Jim Furyk had his hat on backward when he saved par from a bunker in the rain. Furyk joined Tiger Woods as the only FedEx Cup champions who didn’t play the opening playoff event – Woods skipped The Barclays on purpose in 2007, Furyk missed it in 2010 when his phone (and alarm) died overnight and he missed his pro-am, which back then meant he was ineligible to play.

The rest have been decided by three shots or more.