‘Man, this is not too bad’: Abraham Ancer finds silver lining in best-career PGA Tour finish

Abraham Ancer came a stroke shy of Patrick Reed on Sunday — a stroke shy of his first career PGA Tour victory — but, as he sees it, he checked off a whole lot of boxes at The Northern Trust.

Ancer, playing in the final group of a PGA Tour event for the second time in his career, grabbed a brief solo lead after a birdie on the 3rd, but he fell back with bogeys on 4 and 6. He was chasing Jon Rahm and Reed the rest of the way, but he made huge birdies on 16 and 17 to get within one of Reed, his playing partner.

Both Ancer and Reed found the fairway at the par-4 18, but Ancer hit his approach to 43 feet and couldn’t make his tying birdie attempt. He parred, and so did Reed, securing the one-shot win. The 28-year-old Ancer, who led the field in Strokes Gained: Off the tee (1.490) and Strokes Gained: Tee to green (3.430), finished 15 under and in solo second after his two-under 69. Disappointment? Well, yes, but the didn’t last.

“When I finished I was a little down because I didn’t get it done and I feel like I played good,” said Ancer, who was trying to become the third native Mexican player to win on PGA Tour since 1970. “But then getting all this news that I’m going to the Tour Championship, playing the majors, going to the Masters, all that, I was like, Man, this is not too bad. I’m extremely happy, proud of the way I performed today, and like I said, I’m going to keep going. I still obviously want that W, but really proud with all the boxes that I checked off today.” 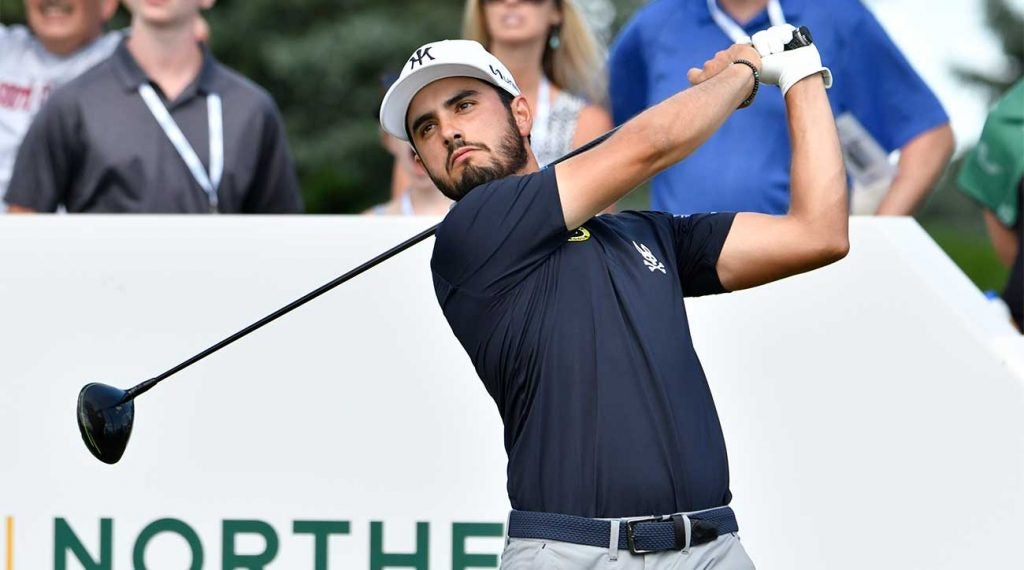 Abraham Ancer tees off during the final round of The Northern Trust.
USA Today

Ancer started the week 67th in the FedEx Cup standings but has now rocketed to eighth. The top 30 in the standings after next week’s BMW Championship qualify for the Tour Championship at East Lake, which, besides big paydays, offers Masters, U.S. Open and Open Championship bids for all 30 players for the next season. Ancer has put himself in position to essentially lock all of that up next week, and that’s not to mention the Presidents Cup points he picked up to represent the International Team versus Tiger Woods and the U.S. in a few months.

“I’m extremely proud of where I’ve come from and how I’ve been able to get all the way to the big stage, which is the PGA Tour and competing for events this big,” said Ancer, who won $999,000 on Sunday. “I’m playing against the best PGA Tour players in the world. The best 125 are here. Yeah, it means the world to me. I’m living the dream. This is what I dreamt about when I was a little kid and I couldn’t be luckier.”