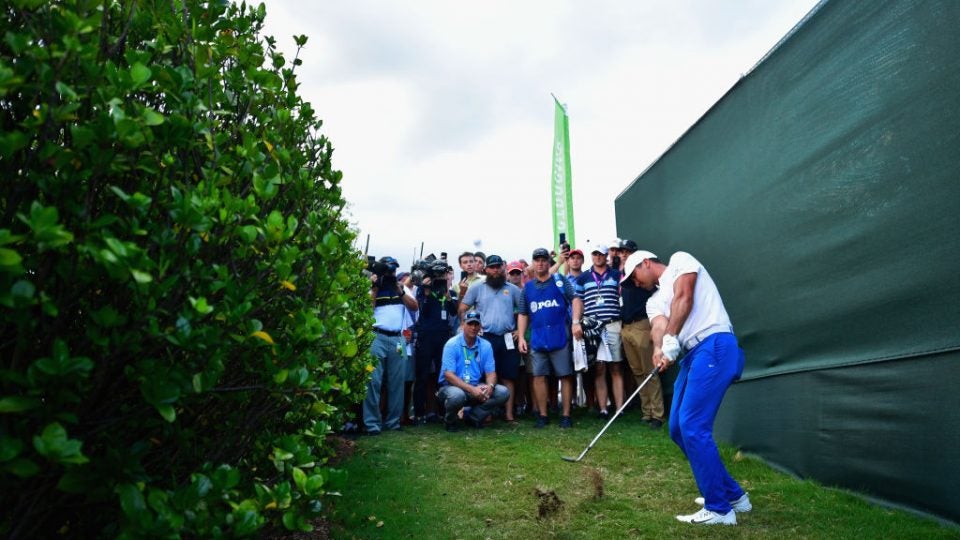 CHARLOTTE, NC - AUGUST 12: Jason Day of Australia plays his shot from the rough on the 18th hole during the third round of the 2017 PGA Championship at Quail Hollow Club on August 12, 2017 in Charlotte, North Carolina. (Photo by Stuart Franklin/Getty Images)

It sure was risky. On the 18th hole in round 3 of the PGA Championship, Jason Day made a string of precarious decisions that resulted in a leaderboard nosedive.

Fans of the Australian watched in horror as Day completely destroyed the bump he’d earned from birdies on 14, 15 and 16. He wound up with a quadruple bogey 8 for the hole and a 77 for the round. He’s now T16 and faces an uphill battle tomorrow.

So what exactly happened? After his drive landed in the pine straw, Day attempted to hit to the right of the trees ahead of him. “It was a decision born from fatigue, I believe,” one of the announcers says in the background after the ugly results of Day’s shot became clear. The ball bounced off a tree and wound up in the bushes. It was all downhill from there.

Day was forced to take a drop from the bushes. His next shot clipped the trees as he proceeded closer to the hole. His fifth was chunked short of the green before finally reaching it on his sixth shot. Day would 2-putt from there for the ol’ snowman score of 8. Watch the series of unfortunate events unfold below.

ICYMI: Jason Day ended The Green Mile with a quadruple bogey on 18 pic.twitter.com/AFWCf2y0IA