The top eight American golfers in the Ryder Cup rankings at the end of the PGA Championship’s final round automatically earn spots on their respective teams. The other four spots are open to captain’s picks, which will be announced in the coming weeks.

On the American side, Koepka locked up the top spot, followed by Dustin Johnson in the second position. Rounding out the top eight is Webb Simpson, who finished T19 at Bellerive.

Bryson DeChambeau is the unlucky bubble boy for the Americans, with Phil Mickelson following him in 10th. Tiger Woods, who will be a vice captain for the Americans at Le Golf National, spoke highly of DechamBeau this week.

“He’s playing great this year. He’s been very consistent. He’s still got a little bit of work to do to get on the team automatically, but, again, we’re definitely looking at him as a pick as well,” Woods said on Tuesday.

Interestingly, Tiger’s thrilling second-place finish at Bellerive moved him all the way up to 11th spot in the rankings. He sat in 20th place at the start of the week. 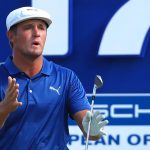 Ultimately, the team will consist of 12 players. After closing out his round of 64 on Sunday, Woods acknowledged that though he will be in Paris either way as a vice captain, he wants to play on the team.

You can see a full list of the U.S. Ryder Cup auto-qualifiers below (in bold), plus the players ranked 9-12.

You can find the full U.S. rankings here.

The first 8 members of our team!