After profitable sessions handicapping landmark golf events like the majors and Tony Romo’s PGA Tour debut, my editor has graciously doled out 1,500 imaginary internet euros for me to spread across this week’s Ryder Cup action. The odds are such that I don’t expect to win many of these, but even a few will pay for a celebratory bottle of bordeaux. The hour grows late: let’s dive in before the bookies close!  (Odds courtesy of Bovada)

1. First player out for Europe in Singles:

It’s Ian’s last stand! If Poulter has even a decent showing over the first couple days of play, I could see him heading out first to provide some European fire, and at a solid price. Plus, how good would it be to see him going up against…

2. First player out for U.S. in Singles:

I know, the odds on this aren’t great given a 12-man team. But consider that Reed led the squad out the gate in 2015 at the Presidents Cup and again in 2016 in that famous showdown with McIlroy. Ride with Captain America.

3. Last player out for Europe in singles:

The last player out should be someone who’s solid and reliable, but isn’t being called on to lead the troops into Sunday battle. Enter Paul Casey. 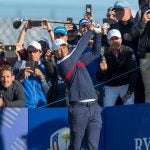 You may also like 2018 Ryder Cup: Pairings, tee times for Friday’s matches in Paris

He was last out at the Presidents Cup last year and beat Emiliano Grillo 6 and 4. Why not run that back?

He could (should!) play five matches and has the hot putter and laserbeam irons to take it deep at Le Golf National (despite a bizarre combo of MCs and a victory in his time here for the French Open). His partners are a question mark, of course (could we see him with Molinari? Rose? Hatton?). Doesn’t matter. He’s got as good a chance as any to rise to the occasion here.

This was Patrick Reed in 2014 and 2016, with 3.5 points each year. Dustin Johnson notched 4.5 points in the 2017 Presidents Cup, meanwhile…but we don’t expect that out of anyone this year. The bottom line is to make this list, you need to play at least four matches. I think Tony Finau just might do that. Not super likely, no. But he’s a likely pair for a fired-up Brooks Koepka, and at +2200 I think the price is right for a dark horse.

The favorite is Tiger Woods at +275, but if he stalls out, I like Tony Finau at +900 for the same reasons as above. Value!

Hammer Noren at +200! Thorbjorn isn’t likely to see the field more than three times and Henrik Stenson isn’t in his best form. This is a great price for Noren.

Take Jon Rahm over Sergio Garcia. It’s a two-horse race, and I’m skeptical of Garcia’s form. I like the idea of a Rory-Rahm pairing, meanwhile, and could see him dialed in for the week. 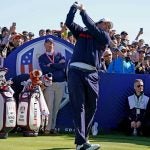 You may also like Ryder Cup career records: Win-loss totals for all 24 players in France

Gimme some blowouts on this wild course! If the wind gets up and one player/team starts going sideways, I think we could see a shellacking. Take 7 and 5 at +900 and, if you dare, peek at 8 and 6 at +2500.

Carry him to victory, Webb!

This may be my favorite bet of all. Would be fun to be proven wrong, but this totally seems at least a half-point high. How many matches will Sergio even play? Certainly not five. That means high expectations for those he does play…

Your best chance to invest in the G.O.A.T.

As we’ve established, I’m a fan of Finau this week.

I just think he’ll play one more match than Woods. Numbers game, after all.

This big-game hunter is locked in for the Ryder Cup, using words like “ego,” “pride,” “reputation,” and “legacy” in his presser.

Don’t overthink this. The U.S. has unquestionably the better team, and the price is quite reasonable. Book it!