Throughout its long history, the U.S. Open has hosted many of golf’s most dramatic duels. From the heroic to the heartbreaking, here are the 11 greatest U.S. Open duels ranked.

Needing just three bogies and a par over the final four holes to clinch his third Open, Bobby Jones almost pulled a Mickelson when he hacked his way to a triple-bogey 7 at Winged Foot West’s 15th hole, then three-putted the 16th from 20 feet. At 18, however, Jones managed to hole a 12-foot left-to-right slider with a foot of break to force a playoff with Espinosa. Ever the gentleman, Jones requested a later Sunday start to the playoff so that Espinosa, who was a devout Catholic, could attend morning church services. After that, Jones conducted a sermon on perfect golf. His scores of 72-69 bested Espinosa by 23 shots. 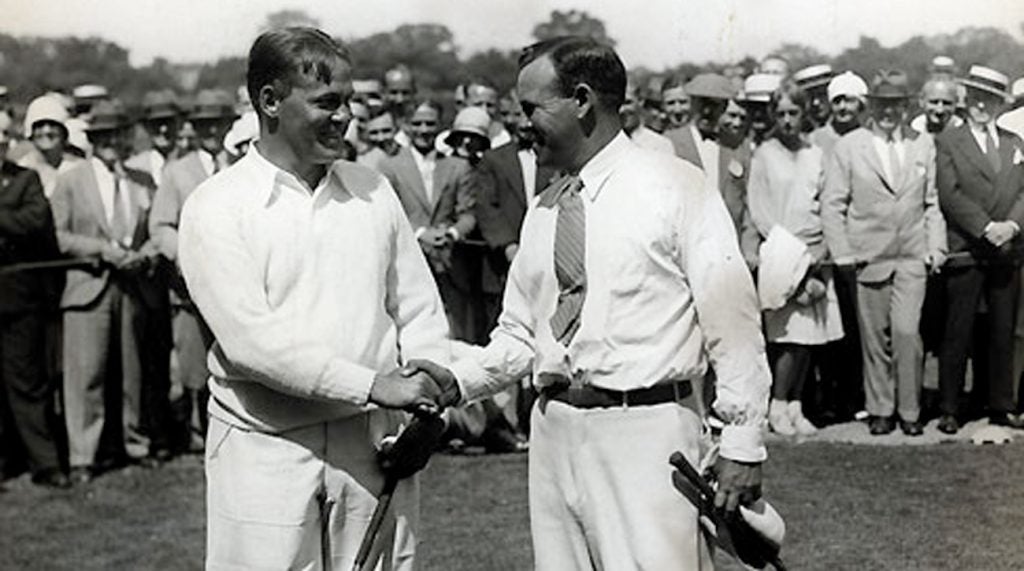 Prior to the 1990 U.S. Open at Chicago’s Medinah No. 3, Hale Irwin’s public persona projected all the pizzazz of an insurance salesman. One putt shattered that perception. The 45-year-old Irwin had been awarded a special exemption to play — but he wasn’t supposed to win. Then again, neither was journeyman Mike Donald. Irwin came to the final regulation hole needing a 45-foot birdie putt for a 67. Astonishingly, he rolled it in. The gallery went berserk, and unexpectedly, so did Irwin. He galloped around the green, raising his arms in joy and high-fiving spectators. Donald later tied him and even matched Irwin’s 74 in the Monday playoff, but on the first extra hole Irwin became the oldest U.S. Open winner ever. 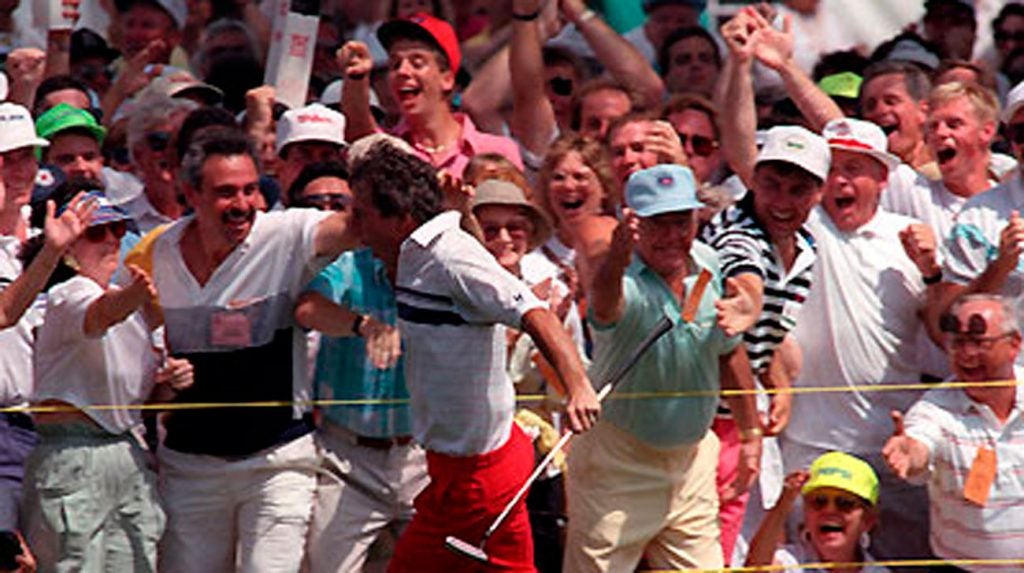 The first ever Open played at Pinehurst No. 2 featured a bewitching setup, but the great names ascended and fell back before leaving just the beknickered one and beeper-wearing father-to-be Phil Mickelson with a chance to win at the final hole. When Mickelson’s 25-foot birdie putt stopped short, Stewart had to hole a 15-footer for par to win. The gum-chomping Stewart stepped up and rammed home the putt. He punched the air emphatically, then bear-hugged caddie Mike Hicks. That October, a plane crash took Stewart’s life, but nothing could dim the memory of one of the game’s greatest showmen winning an unforgettable duel. 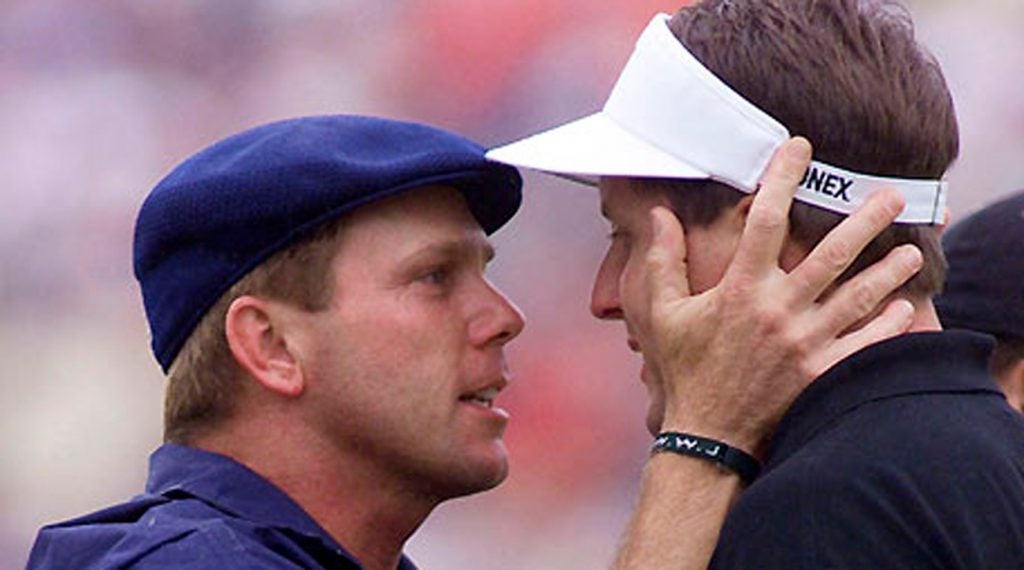 A funny thing happened to Ben Hogan on his way to a record fifth U.S. Open win — unknown Jack Fleck threw a pie in his face. Not literally, of course, but Hogan was wearing egg after finishing the fourth round and tossing his ball to USGA domo Joe Dey, exclaiming, “This is for Golf House” (the USGA museum). But Fleck finished birdie-par-par-birdie on an Olympic Club course where 7-over-par 287 was low score. Apparently undaunted, Fleck threw a 69 at Hogan to take the playoff, in what many consider the greatest upset in golf history. 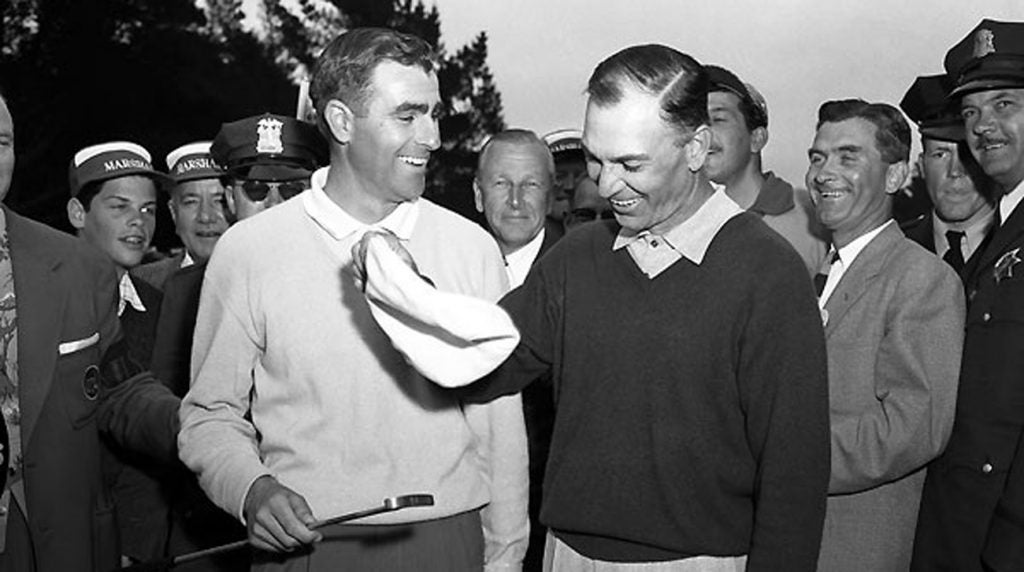 Tied for the lead with Fuzzy Zoeller and playing the 72nd hole in the group ahead, Greg Norman blocked his 6-iron approach into the grandstand. After a poor chip, the Shark somehow holed a downhill, left-to-right, 45-foot putt for par. Watching from the fairway, Zoeller grabbed a white towel and waved it in mock surrender, one of the most memorable gestures in golf history. In a playoff the next day, when the Fuzz ran in a 68-foot birdie putt at the second hole, it was Norman’s turn to surrender. Zoeller’s 67 was the lowest score ever in a U.S. Open playoff, and his 8-shot victory margin was the largest ever. 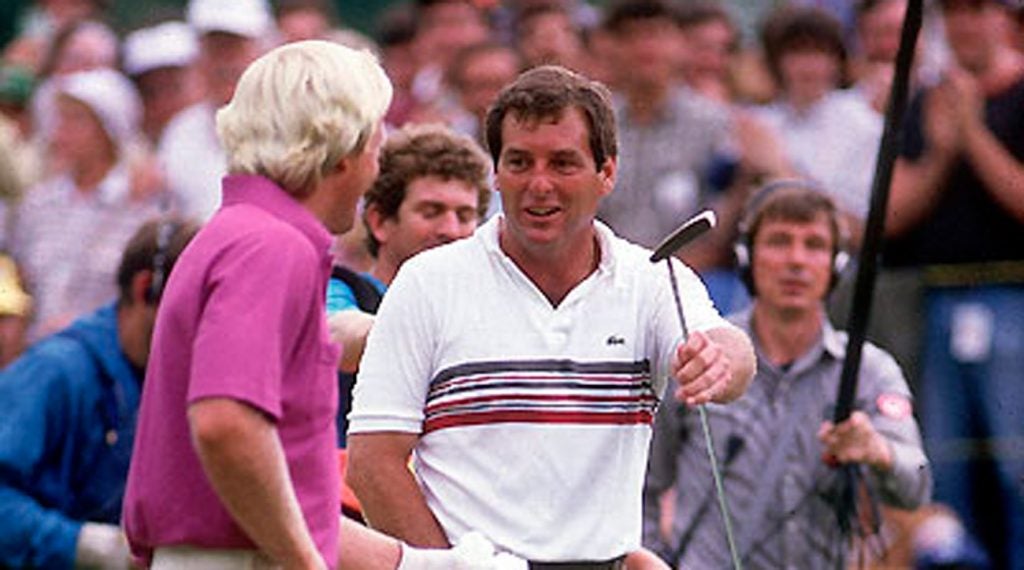 With nine holes to go, Arnold Palmer was thinking about records, not the 7-shot lead he had over Billy Casper. “In retrospect,” says Palmer, “it was the biggest mental error of my career.” Had Palmer come home in 1-over-par 36, he would have broken Ben Hogan’s U.S. Open scoring record of 276. However, bogies at 10, 13, 15, 16 and 17 shaved Palmer’s lead to one — and erased any chance he had of beating Hogan’s mark. The train wreck subsided with matching pars at the 18th, but the steady, hot-putting Casper dethroned the King in a playoff the next day. 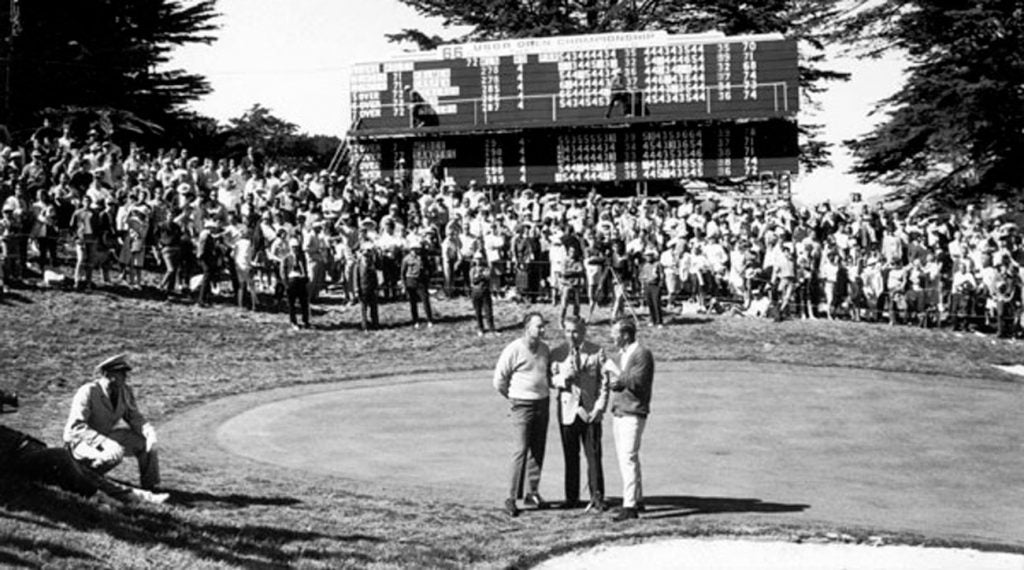 Tiger Woods played the final hole of the 108th U.S. Open at Torrey Pines trailing by a stroke. Oh, and he was basically playing on a bum knee that needed surgery days later. Of course, Woods made birdie, forced a Monday playoff and again trailed heading to the 18th. But that led to another Woods birdie, and Tiger clinched the match on the first sudden death hole. It was his 14th major title. 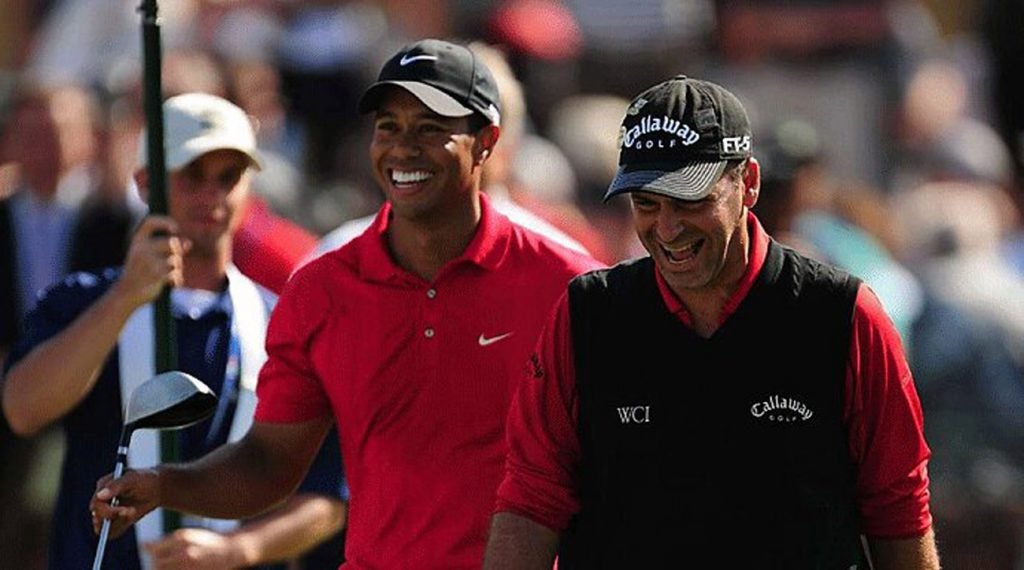 Lee Trevino was hunched over a must-make 6-foot par putt on the 72nd hole, when crack…down came a spectator who had been watching from one of the scoreboards. Shaken, Trevino pushed the putt, then tapped in for bogey. Behind him, Jack Nicklaus bombed a drive down the middle, then stopped a 4-iron 14 feet below the cup for a putt to win. Nicklaus grazed the right edge — but missed. The next day, on the first playoff hole, Trevino playfully tossed a toy snake at Nicklaus, but the Merry Mex’s shotmaking was no joke: After snagging a two-shot lead at the third hole, Trevino never trailed. 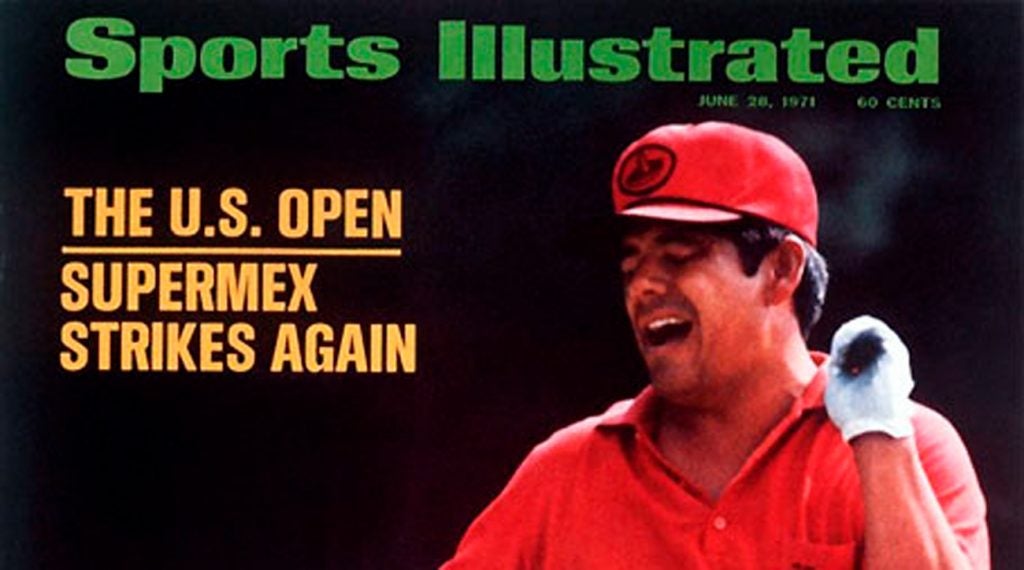 The tournament began with a 21-ball salute to the late defending champion Payne Stewart, but by week’s end, every man present paid awestruck tribute to the 2000 champion, Tiger Woods. “That was the best performance I’ve ever seen,” said two-time U.S. Open champ Andy North. “Nothing else comes close.” So dominant was Woods in destroying a Pebble Beach layout where the second best score was 3-over-par 287 that it moved Ernie Els to say, “Finishing second is good. But it’s kind of embarrassing to finish 15 shots behind a guy.” Tiger’s wire-to-wire sledgehammer act broke nearly every major championship scoring record. 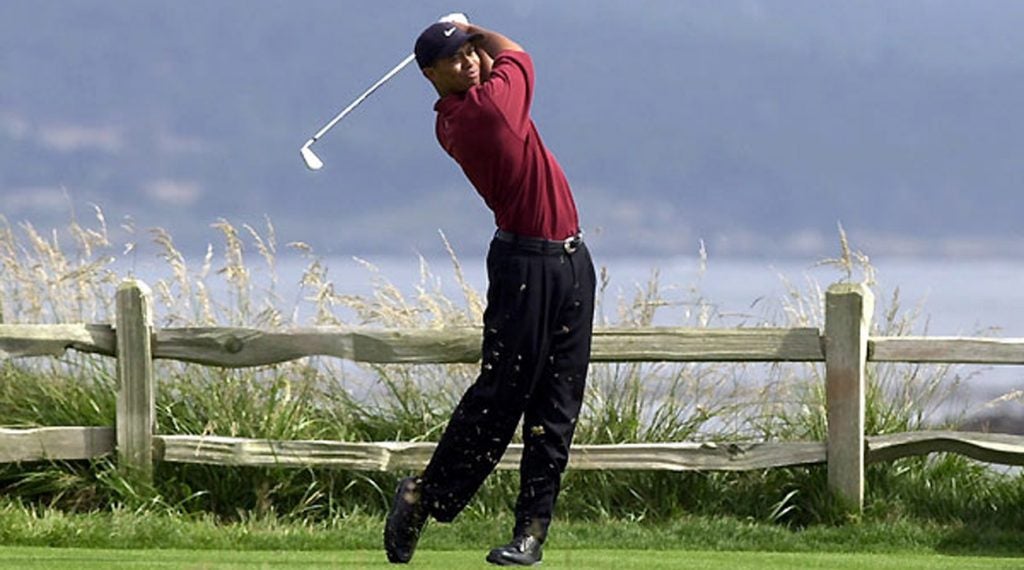 As a Stanford student in the late 1960s, Tom Watson would drive down to Pebble Beach and fantasize that he and Jack Nicklaus were competing head-to-head for the U.S. Open title. In 1982, fantasy became reality. Tied with two holes to play, Watson hit a 2-iron long and into the dense rough at the par-3 17th. “Get it close,” said his caddie, Bruce Edwards. “Get it close?” responded Watson. “Hell, I’m going to make it.” Watson backed up his bravado by scything his sand wedge through the cabbage and popping his ball onto the green, where he watched it take two short bounces and roll like a putt — directly into the cup. One last birdie at 18 sealed the deal. 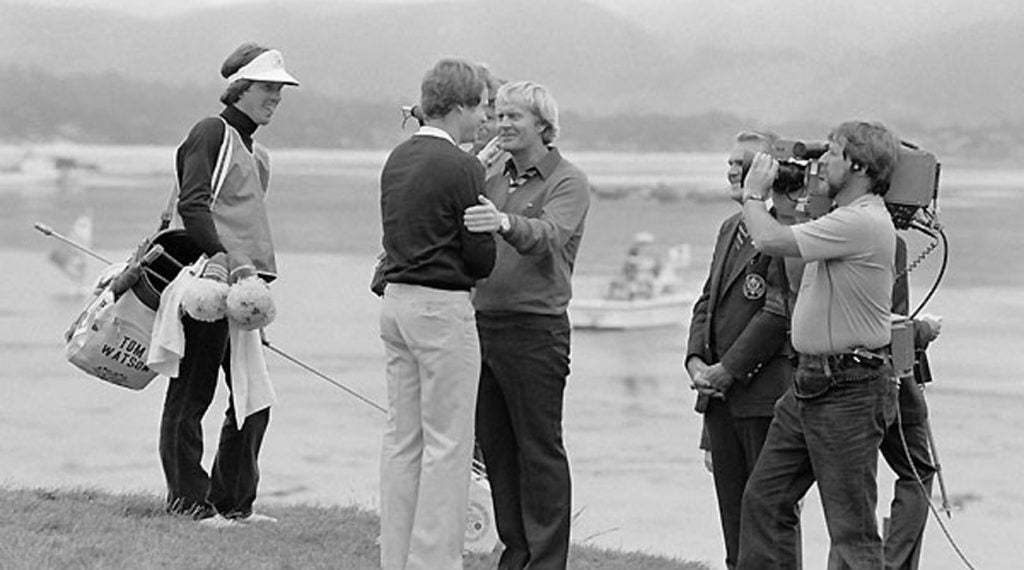 This was golf’s equivalent of Ali-Frazier, and it took place in Palmer’s backyard, at Oakmont, just 35 miles from his home-town of Latrobe, Pa. Palmer entered the Open as golf’s undisputed No. 1, having already won the Masters and five other tournaments that year. But he knew that the rookie from Ohio was formidable. “Everybody says I’m the favorite, but you’d better watch the fat boy,” said Palmer. The King’s premonition was dead-on. Nicklaus made up five strokes with 11 holes to play, then watched Palmer miss a 20-footer to win on 18. In the playoff, Nicklaus darted out to a 4-shot lead and held on. In the end, Palmer 3-putted 10 greens, Nicklaus just one. Palmer out-played the kid for 90 holes, but lost it on the greens. Golf had a new king. 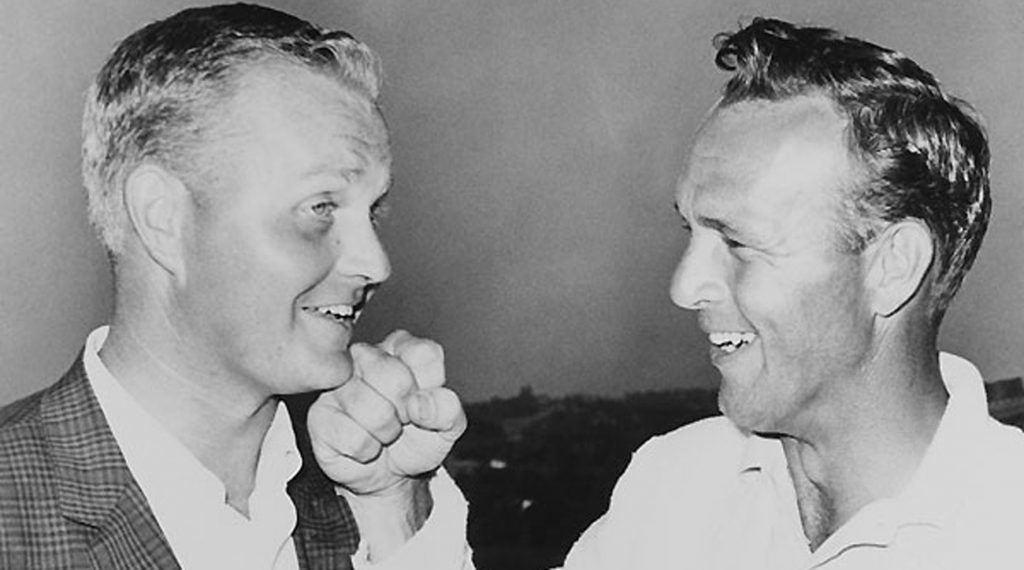