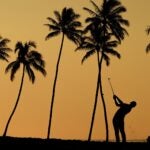 The Sony Open provides plenty of pleasant scenery — but there's tension, too.

It had been a long time since Michael Kim had made a cut on the PGA Tour.

Well, Justin Rose was the No. 2-ranked golfer in the world. Francesco Molinari was No. 6. Rickie Fowler and Jordan Spieth were each inside the top 10. Matthew Wolff was months away from his first PGA Tour start.

The most recent winner on the PGA Tour was Tiger Woods. The European Ryder Cup team had just walloped the Americans in France. The Cincinnati Bengals, quarterbacked by Andy Dalton, had just beaten the Dolphins to improve to 4-1 on the year. If those clues weren’t enough, it was the first week of October in 2018, the beginning of a new Tour season.

That week, Michael Kim shot 72-68 to make the cut at the Safeway Open. On the weekend, he posted 73-77, fading to 73rd. At the time, it seemed like an unremarkable finish. Kim was just four starts removed from winning the John Deere Classic, and life was good; he had the seven-figure check and the multi-year job security that comes from winning on Tour. After his next start, the Open Championship, his T35 finish catapulted him inside the top 200 in the world for the first time.

Gear up for warm-weather golf! But as it turned out, that Safeway Open start represented Kim’s final made cut for a while. After playing no-cut events at the CJ Cup and the CIMB Classic, Kim missed his final two cuts of 2018. In 2019, he made 28 starts on the PGA Tour. Two of them, the CJ Cup and the Tournament of Champions, were no-cut events. In the other 26, he recorded 23 missed cuts and three WDs.

Martin Trainer knows the feeling: He made just one cut in 2020, a T-47 at the Genesis Invitational. Before that start, he’d missed 21 cuts in a row. After that start, he missed 15 more. His lone win, the 2019 Puerto Rico Open, had begun to feel like ancient history.

That brings us to this week’s Sony Open. Kim teed off on No. 10 on Thursday and birdied his first hole of 2021, kicking off an opening round of three-under 67. The cut line was distinctly within reach. Trainer opened with even-par 70. He needed to go a little lower.

Friday dawned, and Kim knew he needed to shoot a solid number to make the weekend. Firm fairways had the course playing short, and calm conditions had plenty of players going low. He shot even par on the front nine. When he made bogey at No. 13, he slipped two shots outside the cut line, but not for long: Two holes later he got that stroke back, sticking a wedge to six feet and making the putt.

And so Michael Kim was three under for the tournament heading to No. 18, needing to make birdie on the reachable par-5 to punch his ticket to the weekend. His tee shot found a fairway bunker, but he drew a good enough lie to advance his ball 230 yards, finishing in the fairway just short of the green.

Kim didn’t talk to the on-site media after his round, and he didn’t immediately respond to our interview request, so we don’t know if he knew just how meaningful his four-foot, four-inch putt for birdie was on 18. The important part was that he poured it in.

Trainer’s round didn’t start until Kim’s round finished, so he had a far clearer picture of the cut line. He’d need a good round. It seemed like a good omen when Trainer holed out from a bunker for birdie on No. 11, his second hole of the day. He picked up birdies at 16 and 18, then made the turn in style by canning a 59-footer for birdie at No. 1. Maybe it was just his day.

Like Kim, he needed to birdie his final hole, a reachable par-5. He made it look awfully easy, sending a tee shot some 326 yards down the right side of the fairway. A mid-iron approach settled inside 20 feet. He left the eagle putt just short and finished off the simple two-putt, posting 66. A made cut, right on the number. A massive sigh of relief.

One made cut doesn’t solve anything, not in the big picture. For both Kim and Trainer, the tough part is yet to come: With their Tour winner exemption statuses running out this year, can each play well enough to keep his card?

But one made cut can mean a big deal, too. Each of these men has seen how a single tournament can change the course of a career, for one thing. For another: The PGA Tour has seen plenty of improbable comebacks. Look no further than Brendon Todd, who had a dip in his career that would look familiar to our two Friday protagonists: He fell outside the top 2,000 in the world, missed nearly every cut from 2016-18 and thought he’d lost his game.

There’s no telling what 2021 will bring to Michael Kim, nor to Martin Trainer. But thus far, it’s off to a pretty good start. Now the weekend awaits. And they’re only six shots off the lead.