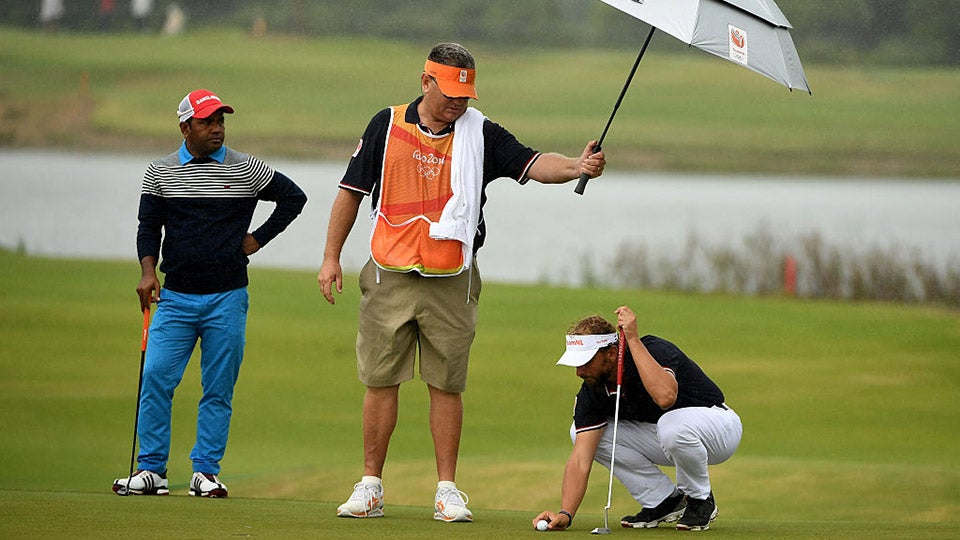 Joost Luiten is shielded from the rain by his caddie Michael Waite during the second round of the Olympics.
2016 Getty Images

Each night during the Olympics, writers, producers and editors from the Sports Illustrated Golf Group give their opinions on the hot topic of the day from Rio. Agree with our takes? Disagree? Tweet us your thoughts at @golf_com.

Men’s golf returned to the Olympics this week after a 112-year absence. All the buzz about who’ll wind up with a gold medal has led some to ask: Do caddies deserve a place on the podium too?

Gary Van Sickle, senior writer, Sports Illustrated: No. How about the massage therapist? The sports psychologist? The swing coach? Brandel Chamblee for his free advice on Golf Channel? If there’s a 100-meter sprint while carrying a loaded staff bag, a sport that I’d watch, then caddies should get medals.

Pete Madden, senior producer, GOLF.com: I don’t buy the slippery slope argument. I’ve always thought it’s unfair that Olympic coaches, even in team sports, don’t receive a medal. I think of a caddie as a kind of on-course coach. They should share in the spoils if their golfers pick up some hardware. Put ’em on the podium!

Alan Shipnuck, senior writer, Sports Illustrated: It’s an interesting question because coaches in team sports do not receive one but, famously, coxswains in rowing do. The caddie role is closer to the coxswain: within the playing field, able to influence every bit of action. But it gets messy because a good number of caddies hail from different countries than their player — in the all-important medal count, can two different nations earn a medal for the same victory? To the original question, I’d like to say yes, but I think a no makes more sense.

Michael Bamberger, senior writer, Sports Illustrated: Yes, give the caddie a medal. Also the teaching pro, the shrink, the dietician, the physio, the travel agent, the maternal grandmother and, what the hell, Ty Votaw, too.

Jessica Marksbury, digital editor, GOLF.com: Michael, you bring up a great point. Where do you draw the line? Some NFL employees who have never even set foot on a field receive a super bowl ring, and don’t swimmers who get swapped out of the final relay lineup still receive a medal if they competed in the semis? The player-caddie relationship is unique in sports. You could easily argue that caddies play an integral part of a player’s success or failure, even though they aren’t responsible for executing the shots. So, I’m leaning toward yes. After all, if caddies really aren’t that important, and are thereby undeserving of a medal, then maybe players should go back to hoofing it on their own and see how that goes.

Jeff Ritter, digital development editor, Sports Illustrated Golf Group: The IOC certainly has the cash to cut more medals. Why not? And while we’re at it, let’s hang them on the equestrian horses, too.

Alan Bastable, executive editor, GOLF.com: Ted Scott deserves a medal, and he’s not even in Rio this week. (Heyyyoh!)

Sean Steinemann, social media editor, GOLF.com: I’m going to go ahead and say no. There’s no doubt that caddies play a big role in helping the players, but at the end of the day it’s up to the player to take the info provided from the caddie and execute. The only way I’d be OK with a caddie getting a medal is if caddie races are added as an Olympic event in 2020. Sorry loopers!

Joe Passov, senior editor, Golf Magazine: Sorry – the caddies lost their “bibs as billboards” lawsuit earlier this year, and they’re not going to win the medal count either. The unique relationship that golf has with caddies dates to the sport’s inception, and while there’s no denying that the great ones have had huge impacts on players and golf history, there’s one undeniable fact: They don’t hit a single shot. No gold for you.

Mark Godich, senior editor, Sports Illustrated: Did Chairman Payne ask Michael Greller for his jacket size? Did Austin Johnson demand his own U.S. Open trophy? Does Gareth Lord have a claret jug? What about Jim Mackay? And where is Steve Williams storing all of his hardware?