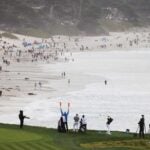 The 10th at Pebble Beach has a tee box that is just steps from the cliff above the Pacific Ocean.

The back nine at Pebble Beach is a contorting layout back to the clubhouse that plays plenty difficult with or without heavy winds off the Pacific Ocean. And thanks to some great setup decisions by the PGA Tour, it started with one helluva golf hole this week during the Pebble Beach Pro-Am.

The 10th at Pebble is listed at 495 yards when it hosts the U.S. Open, and more than 400 yards for the three non-forward tees set up for amateur play. But this week, the tee box for the 10th was all over the place, and especially on Sunday, when it was moved up some 130 yards.

The Tour began the week playing it at 441 yards from typical tees, stretched it to 486 in the third round and then pinched it with a rarely used tee box on the edge of the cliff. Sunday’s actual yardage was just 356 yards, providing a delicious risk-reward scenario for the best players in the world.

The tee box is actually located between the 9th green and the Pacific Ocean, out on whatever remains of the flat land in the vicinity. As Doug Ferguson reported for the Associated Press back in 2014, this tee box was forgotten for years. It was actually siting there, unused, and unkempt by the maintenance team. But Sunday it showed just how tempting it can be.

Viewers who closely followed Jordan Spieth’s final round saw him nuke a drive that ran up just short of the green, from which he pitched on to a couple feet and made a much-needed birdie. But just moments before Spieth teed off, we also saw Nate Lashley groove a long iron, nearly miss the fairway left and make par from 112 yards.

The hole was unsurprisingly appreciated by many people on social media. It’s the perfect rival for the 18th tee box, where players are also asked to bite off as much of the corner as they can chew. And for the field, going for it became the obvious correct play. The large majority of birdies or eagles (red/yellow dots below) were made from players who went long off the tee instead of short into the fairway. Will Gordon was the mastermind who ran all the way through the green with his tee shot that traveled 357 yards.

Ironically, Ferguson got Spieth to comment on the tee box back in 2014. ”It looked really cool,” Spieth said seven years ago. ”Doesn’t look like it’s going to be used because it’s a lot shorter hole from there. But if it was up another 30 yards, it makes it almost drivable. And that would be a really cool hole if 10 was drivable with the water sticking in there, and the way the green is shaped. That would be a pretty awesome hole.”

When asked if he would try to drive the green from that tee box, Spieth gave a fun prediction for his future self.

Seven years later, he sure lived up to it.