Tour Confidential: Here’s how the 2021 golf year will play out 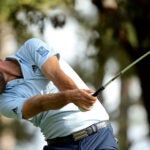 Dustin Johnson during the Masters in November.

Check in every week for the unfiltered opinions of our writers and editors as they break down the hottest topics in the sport, and join the conversation by tweeting us @golf_com. This week, we discuss golf in 2021, including potential PGA Tour and LPGA Tour players of the year, Jordan Spieth, Bryson DeChambeau and Tiger Woods.

1. Another calendar year is upon us, which means it’s time to dust off your crystal golf balls and prognosticate about what the next 12 months hold for the golf world. We’ll start with an easy one: The 2020-21 PGA Tour and 2021 LPGA Players of the Year will be …

Sean Zak, senior editor (@sean_zak): Dustin Johnson on the PGA Tour. The robot wins again. Danielle Kang, another Harmon disciple, on the LPGA Tour. She scratched the surface in 2020. She smashes through it, with another major, in ‘21.

Dylan Dethier, senior writer (@dylan_dethier): Xander Schauffele on the men’s side — a major and three other wins gets it done. On the women’s side, I was so impressed with Jin Young Ko’s finish to the season that I think if she plays enough in 2021, she’ll take down the title.

James Colgan, assistant editor (@jamescolgan26): Justin Thomas for the men. He’s been too close to a truly dominant season for too long, and I think he finds another gear with a major and a handful of regular-season wins. For the women, I like Nelly Korda. She’s still young, but she’s already logged top 10s in a bunch of majors and nabbed three LPGA Tour wins. Maybe I’m a year early, but I like Nelly in ’21.

Josh Sens, senior writer (@JoshSens): All sound picks above, but 2021 will bring us a major, among other wins, for POY Jon Rahm. On the women’s side, as much as my heart says Lydia Ko, my head says Jin Young Ko. Not sure how anyone could go against her.

Nick Piastowski, senior editor (@nickpia): Can’t argue with any of the above picks. For the men, I’ll add in Patrick Cantlay. His game plays anywhere, and this year, he wins a major, along with a handful of other tournaments. For the women, let’s include Brooke Henderson. Nine wins and 54 top 10s by age 23 is a good base to start from.

2. Which player not currently in the top 50 of the OWGR has the best chance to be in the top 10 by this time next year?

Zak: The man with the divisor on his side and the ball-striking to back it up: Will Zalatoris. After him, Cameron Champ.

Colgan: Dang — I can’t believe Dylan stole my pick. Conners is money, and it seems like only a matter of time until he’s a household name. For the sake of argument, I’ll roll with a name off the World Amateur Golf Ranking: Andy Ogletree. The former U.S. Amateur champ and Masters low-am turned pro in November and is the most decorated rookie in the incoming class. It’s a dice roll, but I’ll take it.

Sens: Sebastian Munoz was a star ascendant this past year. I’m expecting a continued rise.

Piastowski: Let’s go with Sam Horsfield. For a stretch last year, he was one of the hottest players in the world. He could be the next big European star. I’ll also toss in Doc Redman. The breakthrough is coming.

3. Jordan Spieth, winless since the 2017 Open Championship and now 82nd in the world, has become one of the game’s great enigmas. (Rankings-wise, he’s no longer even among the top 30 players under the age of 30.) By the end of 2021, will Spieth have climbed back into the world top 50? Why/why not?

Zak: Nope. And to be fair, it won’t take much for him to get there. A couple good finishes is all it might take. But I think he’s shown that he’s further away from breaking out of the funk than every optimist wants to give him credit for. Disclaimer: I’d love to see him back winning again! Not a hater. Just a realist.

Dethier: Yes. A new approach (and a new coach) in the new year won’t get Spieth back to top-five world-beating status, but he’ll do enough to finish the year at the edge of the top 30, thanks to a T4 at Augusta and a T6 at the Open.

Colgan: Yes. He might never be 2016 Jordan Spieth again, but he’s not as bad as his ranking would indicate. With a caveat that he addresses some of the road blocks in his professional life first, I think he’ll get back into the top 50 again.

Sens: I hope so, and I think so. In part, because as Sean says above, it wouldn’t take much. And there’s too much fight in Spieth to write him off.

Piastowski: Yes. I agree that nothing lately really says otherwise. But there have been moments on the Spieth roller coaster. And why can’t a three-time major champion string together a few moments over a few rounds, over even a few tournaments? Of course, this answer could have been just copied and pasted from the past couple of years. But it has to happen. Right???

4. With three starts under his belt in the 2020-21 season, Bryson DeChambeau is averaging a Tour-best 337.8 yards per drive, which is 15 yards longer than his Tour-best 2019-20 average. True or false: In 2021, DeChambeau will become the first player to average north of 330 yards in driving distance?

Zak: False. He’ll give it one helluva run, but come up just shy. 328 yards is my prediction, and it should scare the living crap out of everyone watching.

Dethier: Yes. I think he’ll be selective enough with his schedule to play big-bomber courses, and he’s only shown a determination to increase his speed off the tee. Why not 330?

Zak: I actually don’t think he’ll be selective. He wants to prove his approach works everywhere. He certainly thinks it can.

Sens: Yes, but the idea that he’s going to dominate simply by out-bombing everyone else is silly, part of our distorting infatuation with length. He’ll hit it plenty far and win along the way, but when he does, credit will go as much to other aspects of his game, as was shown at Winged Foot.

Piastowski: Yes. He’s said himself he’s not done adding. He found success with his distance last year, and so the natural inclination is to take it further, no pun intended.

5. The USGA and R&A said the next update to the Distance Insights Project is scheduled to be released in March. (As a reminder, in the original report, published last February, the governing bodies concluded that the “100-year trend of hitting distance increases in golf, as well as a corresponding increase in the length of golf courses…is detrimental to the game’s long-term future.”) Over the course of the next year, how likely are we to see meaningful action from the governing bodies on the distance issue?

Zak: Meaningful action? Very unlikely. You won’t see it from the PGA Tour or the PGA of America or Augusta National. The R&A are focused on getting their championships back up and running, so this feels like it sits entirely on the shoulders of the USGA. I trust them to make a move eventually, but not in 2021.

Colgan: Call me a skeptic, but if it took 100 years to conclude distance was a bad idea, I’ve got a sneaking suspicion it might take longer than 13 months to find a meaningful fix.

Sens: Meaningful action, as in a limited-flight ball or some immediately imposed restrictions on other equipment? Not a chance in 2021.

Piastowski: None. I’m expecting maybe a more sharply worded statement, but distance decisions won’t be priority one this year, and rightfully so. But if the subject of question four wins the Masters by 15 and averages 350 off the tee …

Zak: False. Right now, he’s played all of NINE (9) events in the past 12 months. That’s not all pandemic related. His back wasn’t in good shape in March, and his scoring wasn’t consistent in the summer. I’d expect him to play about 10 times prior to the Ryder Cup, and hopefully he plays well. He’s just not likely to win.

Colgan: I love Dylan’s optimism, but I share Zak’s skepticism. The opportunities are too few to conclude a Tiger win is in the cards.

Sens: Could happen, but, in keeping with the growing gambling buzz around the game, I’d lay 5 to 1 against it.

Piastowski: Yes. I believe in the five-under-over-his-last-six-holes-at-the-Masters Tiger. (And not the 10-on-12 Tiger.)