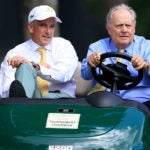 PGA Tour commissioner Jay Monahan and Jack Nicklaus during the first round of the Memorial.

Bryson DeChambeau is 6-foot-1 and about 240 pounds.

As DeChambeau devoured Muirfield Village on Thursday with seven drives over 320 yards, including two over 400 yards, the course’s founder, one of golf’s legends, Jack Nicklaus, believes you can’t make DeChambeau smaller and you can’t make Muirfield bigger.

“The USGA has got to wake up sooner or later, the R&A,” Nicklaus said Thursday on the Golf Channel’s broadcast of the first round of the Memorial. “They can’t keep burying their heads to this. They see it, they watch television, they see where these guys hit the golf ball. It isn’t about how far they hit it. You just can’t keep making golf courses longer. You just don’t have enough land. You don’t have enough money to do it.

Golf’s governing bodies had, then postponed it due to the coronavirus pandemic.

In early February, the United States Golf Association and the R&A released the Distance Insights Report, a summary of what they believe to be golf’s distance problem. The report suggested that increased hitting distances are hurting the game, and while it did not give specific solutions, it did suggest such things as the potential for new conformance tests for clubs and balls, and a local rule that would allow courses to require limited-flight equipment.

R&A executive director Martin Slumbers recently told Sportsmail that the report would continue. He said “the relationship between ball and club” is important.

“It is too simple just to say change the ball,” he told Sportsmail. “Way too simple. You can do things with the ball. But it’s the relationship between ball and club which is most important, to me.”

Nicklaus supported the report at the time of its release.

“As many know, this has been an important topic to me for years, if not decades, and I have been passionate about my position,” Nicklaus said in a tweet. “I applaud the USGA and R&A for their comprehensive research, as well as their continued hard work and efforts. Pleased the process has started now that they have clear findings obtained from century of collecting data & its impact on all levels—from golf played at highest level to recreational golf—I look forward to supporting industry’s collaborative effort to find solutions that are in best interest of game’s future.”

Nicklaus would not change DeChambeau.

Over the past year, DeChambeau has added size and, with it, distance. Nicklaus is impressed.

“I’m not going to do anything to stop him,” he said during the Golf Channel broadcast. “He’s going to have to stop himself. Good gracious. More power to a guy who can hit the ball like that and put it in the fairway and then play and score well, which is what he’s been doing. I just sit there and applaud. I’m not worried about stopping him.”