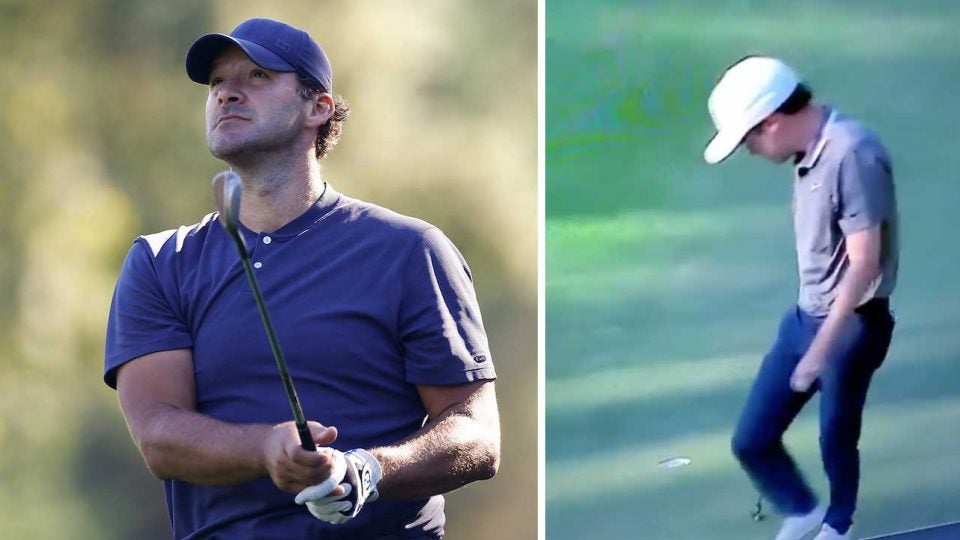 In just his second tournament as a PGA Tour member, Norwegian pro Kristoffer Ventura was forced to address a strange allegation: that he had spit on Tony Romo’s golf ball.

Playing the par-5 16th hole at the Safeway Open on Friday, Romo stood in the fairway, 278 yards out, and pulled 3-wood. According to playing partner Michael Gellerman, their group believed the hole was open in front of them — nobody was on the green, and the pin was in.

Gellerman and Beau Hossler hit their approach shots, and then Romo striped his, “the best 3-wood I’ve ever seen in like a month,” according to Gellerman. The ball rolled onto the green and settled just past the pin, leaving just inside six feet for eagle. The only problem? The group in front was still playing the hole.

Up ahead, Dom Bozzelli, Hank Lebioda and Ventura still needed to finish on the green. Ventura, hovering around the cut line, was the last man to putt. His two-footer put his stance on the edge of what would be Romo’s line to the hole. Ventura slipped his par putt inside the left edge of the hole, then took a close glance at Romo’s ball on the way off the green.

Golf Channel cameras captured the glance. But Golf Channel viewers ran wild with the moment, speculating that Ventura had spit on Romo’s ball.

But Ventura had another side to the story. Replying to the video, which had been reposted by No Laying Up, he defended himself.

“I definitely did not spit here,” he wrote on Twitter. “I moved my head to see if I had left any spike marks because I knew I was close to his line, hate to disappoint you guys.”

I definitely did not spit here. I moved my head to see if I had left any spike marks because I knew I was close to his line, hate to disappoint you guys

Ventura has a strong case, and logic on his side. There’s certainly no real evidence from the video of spitting, and his explanation — checking for spike marks — seems far more likely. But the internet’s wheels were already in motion.

In the end, Ventura’s two-footer ended up being the more important of the two putts anyway. The rookie will live to play the weekend after rounds of 72-70 put him through to the weekend by a single shot. Romo, on the other hand, couldn’t match his opening round of two-under 70 which got everyone so hot and bothered. He made six bogeys on his opening nine en route to a six-over 78 and a missed cut, which means he’ll take the consolation prize of calling Sunday’s Vikings-Bears game for CBS.

And no, he didn’t make that putt for eagle.