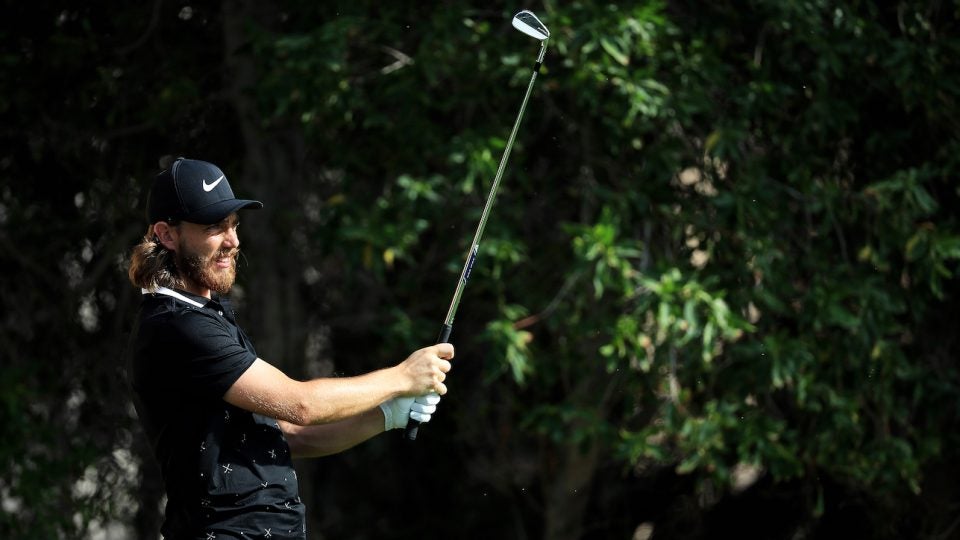 Tommy Fleetwood appears to have switched to a set of TaylorMade P-7TW irons.
Getty Images

Tommy Fleetwood knew this day was coming. After playing most of last season with his last set of Nike VR Pro Blade irons — and striking out in an attempt to acquire a set from Paul Casey — Fleetwood appears to have made a change, as he was spotted with a set of unreleased TaylorMade irons with “P-7TW” stamped on the head during a practice round at the Abu Dhabi HSBC Golf Championship.

It’s likely the “TW” version was made specifically for TaylorMade staffer Tiger Woods, who started using a one-off version called TW-Phase1 last year. Based on closeup photos of Fleetwood’s irons, the cosmetics appear to be nearly identical to the retail P-730 muscle back.

As for why Fleetwood chose a TaylorMade blade bearing Woods’s initials, it’s worth noting Fleetwood’s Nike VR Pro Blade irons were initially made for Woods. There’s likely something about what Woods prefers in an iron profile that resonates with Fleetwood.

With Fleetwood considering the unreleased TaylorMade irons, the other question that needs to be answered is whether Woods will make the jump to P-7TW as well. The irons were seen in his bag during a recent TaylorMade shoot, so it’s possible. The good news for gear-heads is we won’t have to wait long for an answer with Woods teeing it up at Torrey Pines for the Farmers Insurance Open in a little more than a week.

As for Fleetwood, there’s a good chance he could be the first professional on the planet to break in the new irons next week in Abu Dhabi. If Fleetwood does decide to green-light the irons, he won’t have to sweat finding a replacement if one of the clubs gets dinged up — something he struggled with last year in Mexico when he realized the hosels on the Nike 7 and the 8-iron had been bent from wear and tear. Without a backup set on site, Fleetwood played the WGC-Mexico Championship with 12 clubs.

“Honestly, changing might make life easier if something went wrong with a set from another manufacturer,” Fleetwood said. “I could get them fixed and it wouldn’t be a struggle.”