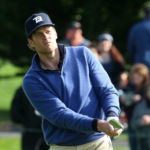 Tom Brady will partner with Phil Mickelson to take on Peyton Manning and Tiger Woods in The Match: Champions for Charity.

One of McIlroy’s drivers might be playing in this week’s charity event.

About a week before last Sunday’s TaylorMade Driving Relief skins game at Seminole Golf Club, McIlroy and NFL quarterback Tom Brady played world No. 4 Justin Thomas and Seminole president Jimmy Dunne in a match at Seminole. McIlroy and Brady lost. They didn’t even make “the fence,” an expression at Seminole that means your match woefully didn’t make the fence of the driving range, near the 15th green.

Brady had a somewhat good excuse.

“Tom played OK,” McIlroy said on ESPN’s Stupodity podcast recently. “He didn’t have a driver in the bag.”

Said Dunne on the podcast: “Tom, yeah, he was whining because he came from Tampa Bay and he had his different clubs. I said, ‘Give me a break.’ So anyway, he didn’t have the right driver, and he didn’t like the putter.”

The next day, McIlroy gave Brady one of his backup drivers.

That next day, Brady went out and defeated Dunne in another match at Seminole.

And Dunne believes McIlroy’s backup driver could be the starting driver for Brady on Sunday, when he and Phil Mickelson take on Tiger Woods and Peyton Manning in The Match: Champions for Charity at Medalist Golf Club.

“Rory on Saturday morning brought a driver over to Tom and Tom really pured it so that will do him some good on his match on the 24th,” Dunne said on the podcast. “He hit the driver really, really well, and he always putts well. But yeah, he and my son CJ kind of slapped around my son Seamus and I.”

Dunne has played golf with Brady, a new member at Seminole. He’s also played with Manning, both at Seminole and at Augusta National, where Manning is a member.

He gives the edge on Sunday to Manning and Woods.

“Peyton is a good player. They’re different. Peyton negotiates his way around the golf course. Tom has a little more power,” Dunne said on the podcast. “Tom looks better, but I’m not sure – Peyton’s pretty tough. I would say Peyton and his partner will have the advantage up there at the Medalist. That’d be my guess. But I’ll be pulling for Tom and Phil obviously.”