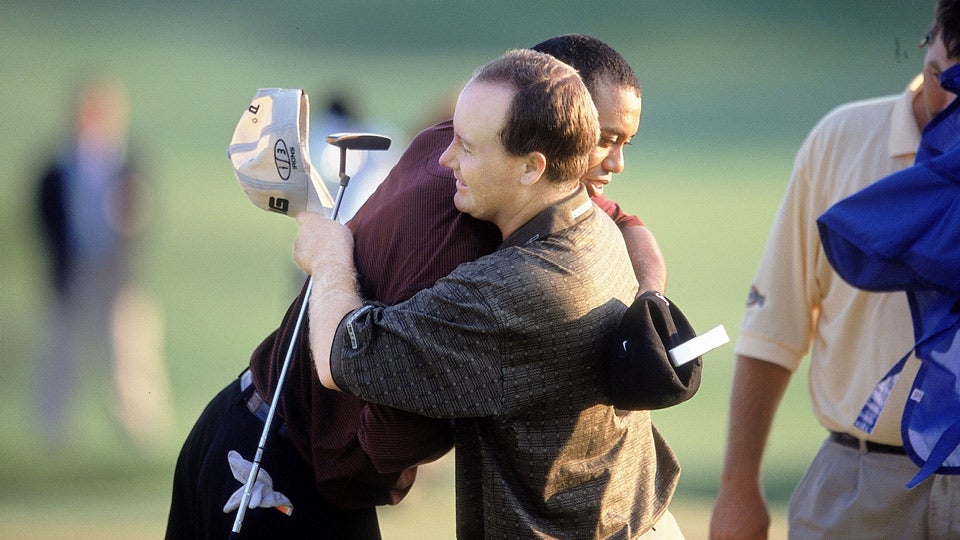 Tiger Woods and Boby May embrace after the 2000 PGA Championship.
John Biever/Sports Illustrated

Nothing about the exploits of Tiger Woods seems believable in hindsight.

When Woods won the 2000 PGA Championship, he took ownership of the all-time scoring record in all four major championships. This just three years after his 1997 Masters breakthrough.

Even wilder, Tiger’s three-hole PGA Championship playoff victory over Bob May at Valhalla turned out to be the greatest duel of Woods’ career, even though many more major titles were still to come. Think about it. If you picture the two most memorable scenes in Tiger’s major victories, one has to be the first extra hole at Valhalla against May, when Woods poured in a 25-foot birdie putt and went prancing after it, pointing at the cup long before the ball reached it. Turn on Golf Channel at just about any moment during the offseason and it seems to be a 50-50 chance the network is replaying highlights of the Tiger-May duel.

Wilder still, Tiger’s greatest-ever duel was with… a 31-year-old journeyman named Bob May? May was a relative unknown, although he’d been a superstar in California junior golf when a young Tiger was growing up. Subsequent back problems meant that May had all but vanished within a few years of the Valhalla thriller, but he was a rival in the skills department. A back-nine 31 at Valhalla helped him finished 72 holes at 18 under, a PGA record that Tiger tied moments later. May shot his third 66 in the final round.

“I think if you shoot three 66s in a major, you should win,” May said. “But you’re playing against the best player in the world, and he proved it wasn’t good enough.”

The PGA win was Tiger’s third in a row. He’d go on to make it four in a row the following spring at Augusta.

It almost wasn’t a playoff duel at all. Woods needed 15 putts over his final 12 holes, and he’d lost the lead early in the final round — it wasn’t until that first playoff hole and that theatrical birdie putt that he regained it. The key moment of the duel came at the 15th. Woods holed a tricky 15-footer to save par, and then May missed his four-foot birdie putt. If it had gone the other way, May would have cruised in with a three-stroke lead. Instead, his lead was only one. And Tiger, 24, quickly erased that with a wedge shot to four feet for birdie at the 17th.

So they went to the 72nd hole tied for the lead. Both players reached the par-5 green in two, but each had a long putt. May’s effort ended up 18 feet away. It didn’t look good. Tiger hit his putt to six feet, still not a gimme. May then dropped his momentous putt in a stunning instant, and Tiger followed by making his, too.

That exchange led to a three-hole playoff. Woods took the edge on the first extra hole with that famous putt. They got up and down for pars at the second hole, and at 18, Woods hit a greenside bunker shot to a foot for a tap-in birdie, and then watched as May missed a long eagle try.

“It was one memorable battle,” Woods said. “Birdie for birdie, shot for shot, we were going right at each other. I think it’s got to go down as one of the best duels in a major championship.”

It turned out to be the most dramatic shootout in Tiger’s career — and possibly the most memorable victory of a memorable career.