Tiger Woods will not win the Honda Classic but, remarkably, he’s playing meaningful golf on a Sunday again

PALM BEACH GARDENS, Fla. — Tiger Woods is not going to win this Honda Classic, played about 20 miles down the road from his home in Hobe Sound. He shot a third-round 69 and it was solid. He shot an even-par 70 on Thursday and a 71 on Friday and through 54 holes there are 10 players ahead of him, with Luke List leading them all at seven under par. Woods is not making up seven shots in one day. That’s just not happening. Not at age 42, on a windswept course with firm greens and snarling rough.

But he’s playing meaningful golf on a Sunday, and if you care about this game, and the broad and great notion of second chances and comebacks and all the rest, you have to be interested in what he does. This is the man with 79 Tour wins, 14 of them majors, who has been dragged through the tabloids and posted on police blotters and has lived an ultra-examined life as one of the most famous and unknowable people in the world. Golf has never seen the likes of him before and will not again. 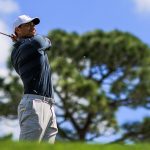 What Woods has done over his three rounds here is remarkable. He has shown—as an athlete in recovery in every sense of the word—that he is capable of being a top-50 player in the world again. He has shown that he can contend. And if he can contend, he can win. His play, and the way he turned things around from last week at Riviera, is proof that he is willing to do the work, to make the adjustments, to continue to try to figure out this maddening game. He’s his own halftime coach now, as he is going it alone, without a swing coach watching his every move. He’s never worked that way before but he knows how to use a computer. He knows how to look at old swings. Work was always his starting point. His finishing point—the thing that made him Tiger Woods—is what his father used to tell him: “Let the legend grow.” Yes, it’s an odd and outrageous sentence, but it got right to the heart of Tiger’s greatness. There was the work, which Woods did and which Woods relished. But there was also the lavish and outrageous talent. So work, talent and a third element: the ability to summon that talent when it mattered most. That was his ultimate secret weapon. You might wish for him to write about that someday. It cannot be done. It’s beyond mere words.

Work is work. You can do it or not, and Tiger has always been willing to do it. Talent is talent, and it erodes over time, for everybody. As Woods has often said, “Father Time is undefeated.” But he’s still very, very good at golf. Is he as good as Justin Thomas and Tommy Fleetwood? No. But that doesn’t mean he can’t have his weeks. He’s playing the Honda. But you know he’s thinking about Augusta, where he’s won four times. Augusta is not as hard as this PGA National course. The summoning of talent, at just the right time, that’s why we’re watching.

You’re watching, right? Maybe you’re at home, screaming for Tiger’s putts to get in the hole, wishing that your screen could hear you. It can’t. Tiger can’t, not even if you’re here at the course. Yes, he can hear you, but he does not care. He has never cared. But he likes the feeling of beating everybody else. That’s been a drug for him all his life. Top-50 in the world will do nothing for him. But winning—getting No. 80, getting No. 15—that would. That would do something for him. What exactly that would be is hard to say, but he’s a golfer. He’s a golfer who plays to win. That’s been his life’s M.O. Nothing is changing now. 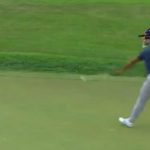 You may also like WATCH: Tiger Woods drops 15-foot birdie to move into red numbers Saturday at Honda Classic

His Saturday playing partner was Jason Dufner, winner of the 2013 PGA Championship. Dufner is a lot like Woods, a golf nerd who could play every day. In fact, over the course of this winter, the two have been playing regularly together at the Medalist Golf Club. They have different methods but speak the same language. Golf is more science to them than art. Dufner knows what Woods knows, that the game is fickle, whether you’re very good at it, as Dufner once was, or great at it, as Tiger Woods was. Dufner is 40. Woods is 42. With the possible exception of Vijay Singh and Ben Hogan, you’d be hard-pressed to name elite golfers who were better in their early 40s than they were in their early 30s. Woods’s goal from here on out is not to let the legend grow. It’s to stem the tide of eroding skill. Bernhard Langer, Fred Couples, Jack Nicklaus, Tom Watson, Lee Trevino, Hale Irwin, among others, played world-class golf in their 40s and 50s. Tiger can do what they did, if his body cooperates. Tiger can do what they did and possibly more.

“I’ve been pretty patient with it,” Woods said late Saturday afternoon, talking about the nine rounds of Tour golf he has played in 2018 and the strides he has made. He has been, and it’s been neat to watch. Golf requires patience. That’s why so many people have no use for it. Tiger Woods is not among them.